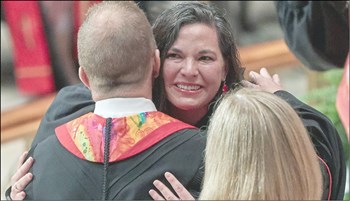 Happy tears wet Sarah Thornhill’s face as she accepts congratulations as a newly ordained clergy elder on May 30 at OKC-St. Luke’s.

OKLAHOMA CITY — The amount apportioned to each church in 2019 will be 6.36 percent lower than the individual church’s 2018 apportioned amount.

On May 31 at Oklahoma’s Annual Conference, delegates approved that reduction and a $13.4 million budget for 2019, which also is 6.36 percent lower than Oklahoma’s current budget, $14.3 million.

Some 1,200 delegates and guests attended the meeting on May 29-31 at Oklahoma City University, with OKC-St. Luke’s hosting the worship service in which 27 clergy were ordained, commissioned, or recognized for associate membership. Bishop James Nunn presided.

The Council on Finance and Administration secured approval for a two-tiered funding system in 2019, freezing the Conference Decimal Plan, which calculates each congregation’s share of the budget, at 2018 levels.

“Apportionments” and “Connectional Opportunities” will be distributed to each church for financial support.

Apportionments: The Pre-Conference Workbook defines this category as “priorities that can only be carried out by the annual conference and that include General and Jurisdictional apportionments. ... It is requested that each Apportionment shall be included in full in each local church budget, reflecting a commitment to the worldwide mission of the Church.”

Bishop Nunn previously has described much in this category as “infrastructure,” ministries often less visible yet undergirding all Church operations.

Connectional Opportunities: In his “Episcopal Priorities” speech on May 29, the bishop said this category “seeks to acknowledge the value of (a) ministry, approve it as a worthy endeavor, and place the decision for support at the local level. The change appeals to your heart for ministry, instead of mandating the items as apportionments.”

The itemized budget is on pages 107-108 of the Pre-Conference Workbook. Find the material at www.okumc.org by searching for “pre-conference workbook.”

May 30 was “Annual Conference Teaching Day,” with headliner Junius Dotson, the denomination’s general secretary of Discipleship Ministries, and afternoon workshops on 20-plus topics.

Bishop Nunn described Rev. Dotson as “one of the foremost recognized visionary leaders in church revitalization.”

“If there was ever a time for courageous conversations, it is this,” said Dotson, who launched the Church’s “See All the People” initiative in 2017. Each participant received two of his guidebooks, gifts from the Oklahoma United Methodist Foundation.

He said, “It’s not about waiting for people to come to us. It’s about building relationships. We can’t disciple people we’re not in relationship with.” 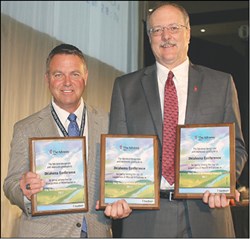 “Each priority is grounded in the strategic plan of the Conference and complements major points of emphasis within the denomination,” he said.

He celebrated a net increase of 2,111 people in worship attendance, which for the first time counted those watching online.

“One of the challenges we face is to reach the vast online community. Let’s see all the people,” Nunn said.

Professions of faith declined for the third consecutive year. He suggested, “Don’t limit your audience for Confirmation to the people already inside your walls. Let’s see all the people.”

As for the number of people involved in missions, “we have increased our involvement nine-fold over the base year 2006,” the bishop said.

He plans to join other mission volunteers this summer for “OK, Let’s Finish This,” helping make home repairs after hundreds of Oklahoma houses were damaged in 2015 by flooding.

“I am thrilled to report that our unfinished projects have dropped to 20” in this disaster response campaign. “Friends, we stay until the work is finished. Let’s see all the people.”

Also in the spotlight were the following.

Among individuals honored during the meeting are these:

In the final segment of his episcopal speech, which drew on the meeting’s “Quest” theme, the bishop discussed the 2019 General Conference of the Church.

He had been asked, “With all the unknowns in the denomination, should we just wait before starting anything else?”

Nunn said, “It is a valid question. My response is this: It will be at least another half century before the Church finds resolution to some of these issues. By the time these issues are resolved, others will emerge.

“Such is the nature of a quest. A quest is filled with trouble and danger. A quest holds both peril and promise. We have produced fruit for the Church and, more importantly, for God. The real ministry takes place in the lives of the people we touch. We cannot wait for resolution of Church issues to do good to people who need us around the world.”