OKLAHOMA CITY — Oklahomans showered appreciation (and even rain) on their episcopal family during the 2016 Annual Conference, May 30-June 2 in Oklahoma City. That gratitude clearly was reciprocated.

Bishop Robert E. Hayes Jr. will retire Aug. 31 after 12 years leading the Oklahoma Area. Distinctive in the Church is his ministry as the first African-American bishop assigned to both a Native American annual conference and a predominantly white one.

In the opening worship processional, the bishop’s pause at the altar in OKC-St. Luke’s hinted of his desire to savor final moments in his role. He preached five times; he spontaneously joined in "It Worked for Us" award photos; he autographed copies of a tribute booklet and volume two of his devotional articles, collected from the Contact and the Advocate, newspapers.

The Hayses accepted gifts and accolades from many, but they in turn gave gifts and thanks to others.

When the feet of Bob and Dee Hayes were washed in a poignant ritual, the husband grasped the wife’s hand as they supported one another during the Service of Celebration. Then the barefoot bishop declared he was standing on holy ground before 1,200 people at the National Cowboy and Western Heritage Museum.

Among firsts at this conference, Alan Nagel and Tiffany Nagel Monroe became the first father and daughter ordained together in the denomination, according to the United Methodist News Service.

Also unusual, Wendelyn Perceful was ordained, joining husband Ron and son Chad as clergy elders. Melanie Dewey of Tulsa-Centenary UMC was consecrated by the bishop as a new deaconess, a laity role. And Oklahoma’s deacons celebrated their 20th anniversary as clergy.

Here’s a summary of some other matters.

• NEW PEOPLE NEW PLACES — The initial round of grants resulted in 72 first-time professions of faith.

• APPORTIONMENTS — The 2017 budget of $14,528,433 was approved after requiring Conference financial leaders to find sources other than Apportionments to fund New Faith Communities at $1,075,000.

• GLOBAL MISSIONS — Karen Distefano reported, "On your watch over the last 12 years, Bishop, people have donated $11,095,743.02 in support of missionaries and ministries."

Christ’s light has been shared in 65 countries through 81 missionaries, helping people after 149 disasters and supporting 364 ongoing ministry programs.

The Conference was recognized for the highest church participation in the denomination in donating to Advance and UMCOR Specials — 85 percent of all Oklahoma churches made contributions.

• ANNUAL CONFERENCE OFFERING had reached $60,814.59 as this newspaper issue went to press. Contributions continue to be welcomed. The goal is $130,000 to establish an endowment at Africa University in honor of Bishop Robert and Dee Hayes.

• MONEY GIFTS honoring the Hayeses were made by groups and individuals to special funds through the Foundation, totaling $16,272 as Contact went to press. The total included $8,000 to the Pastors Education Fund and $8,247 to the SPST@OCU Bishop Hayes Scholarship Fund. Donations continue to be accepted, and more gifts have been promised.

• AWARDS — The Young Adult of the Year Award went to Josh Pulver, and Brian Bakeman received the Board of Laity’s first "He Worked for Us" award. 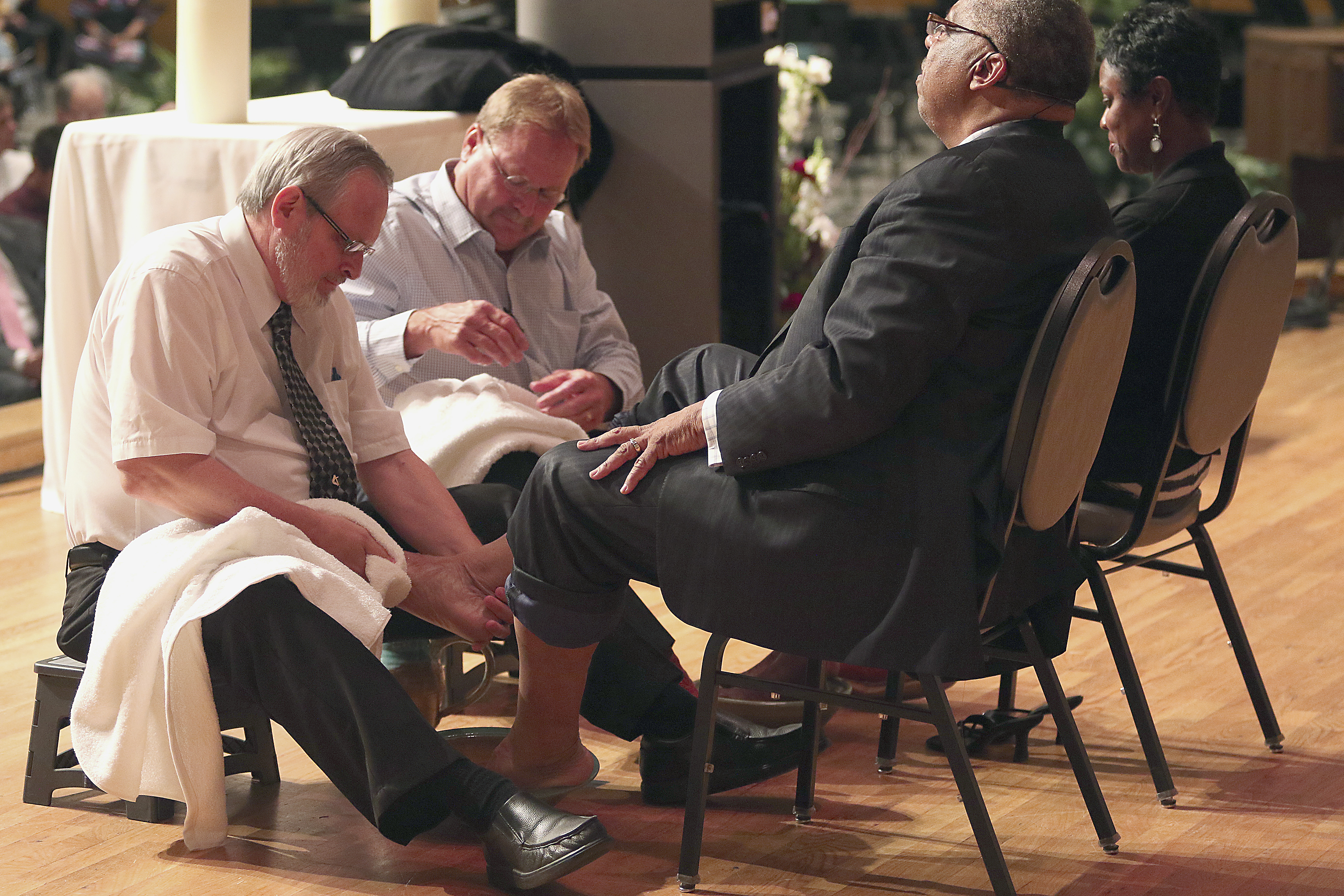 From left, Chris Tiger and Chuck Stewart wash the feet of Bishop Robert and Dee Hayes at the Service of Celebration on May 31. The bishop first washed the feet of new clergy in the Service of Ordination at the 2012 Annual Conference. Rev. Tiger has been Cabinet dean; Stewart, Conference Lay Leader.
Photo by Hugh Scott
Making Disciples of Jesus Christ for the Transformation of the World