For five days in mid-July, the grounds of Edmond-First UMC were filled with 75 splashing, sliding, bouncing, and giggling kids — immersed in a mobile day camp model being considered by the Conference’s Camps ministry.

By Summer 2017, Camps leaders hope to be fully equipped and staffed to take this type of camp to local church locations around the state, instead of the other way around.

They are looking for eight churches that will host such a camp next year, said Ed Parker, Conference Camp and Retreat Ministries executive director.

The mobile day camps are "designed to fold into a church’s strategic plan for reaching new people in their communities," Parker said.

Edmond-First welcomed the opportunity to host the pilot event. Some clergy from other churches visited during the week to observe, Parker said.

It was operated by Eagle Lake Camps of Colorado Springs, Colo. Eagle Lake is affiliated with the Navigators, an international, interdenominational Christian ministry. Teams of trained young adults conduct day camps in several states throughout summer. The staff members stay with host families during their travels.

In Edmond, the Eagle Lake staff set up a play area outside the church, with a water slide, slip-and-slide, rock climbing tower, and trampoline-style device that allowed kids to bounce and flip while secured with bungee cords. An octagonal court was set up for ga-ga ball (a variant of dodge ball), and equipment was provided for games of nine-square.

Children were divided into teams that rotated through several activities, including outdoor play, archery, Bible study, worship, and both large- and small-group activities.

Among the young adults helping coordinate the activities was Eagle Lake Program Coach Jordan Weig, 20, of Montrose, Colo. She has traveled to several states with Eagle Lake, including Iowa, Nebraska, Wyoming, and Missouri.

Weig, a student of clinical and counseling psychology at Colorado State University, said she loves the opportunity to see different states and the experience of staying with host families.

For Edmond-First, the goal was to provide "the church camp experience without having to go to church camp," said Megan Borum, First Church’s director of children’s ministries.

"I have found there are so many kids who can’t go (away) to camp for so many reasons." Among the children who attended the Edmond event, "over half of them are not active in our church," she said.

The proposed mobile day camps will be "a good way to connect with your community."

The Conference’s Camps ministry will be able to set up its own mobile day camp system, Borum said, based on what she saw. "I think it’s doable. I really do."

Neil Tate, who is the Camps’ program director, said the ministry plans to reach out to children ages 7-12 next June and July through this type of mobile day camp programming. Young-adult college students with United Methodist affiliations will be recruited and trained as staff.

Tate can be reached by email to ntate@okumc.org.

Grant funds from the Conference’s New People New Places program are making it possible to develop this option.

Tate has been monitoring the Eagle Lake system and said the organization does "a fantastic job."

Both Conference and Edmond-First leaders agreed quickly to the model opportunity when they learned in May that an Eagle Lake crew was available to come to Oklahoma in July, he said. 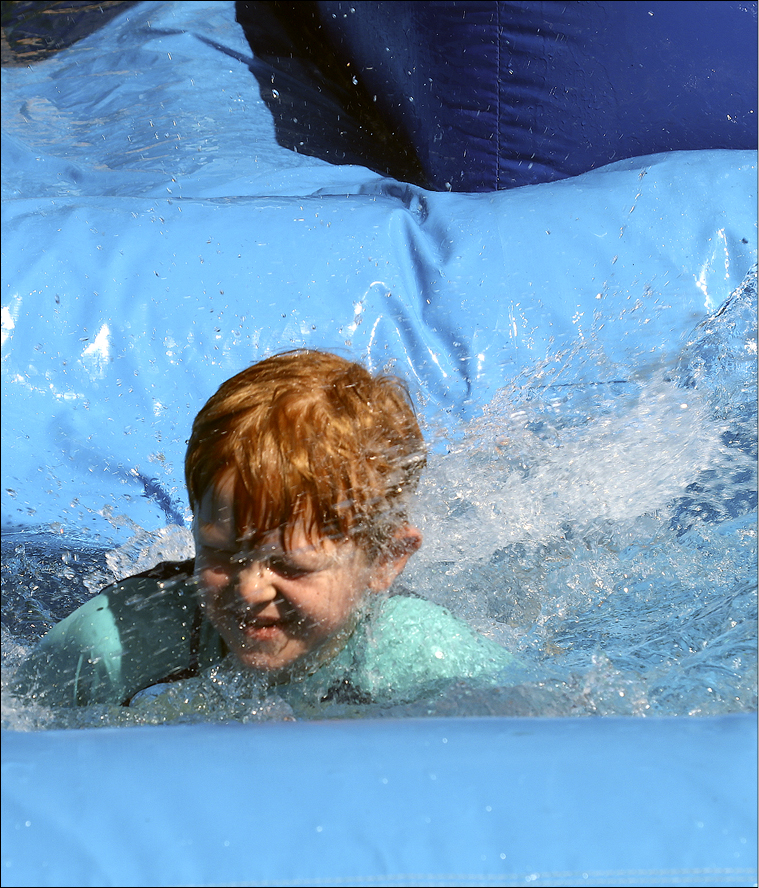 A day-camper splashes down at Edmond-First in July. Oklahoma’s Camps ministry plans to expand with mobile day camps.
PHOTO BY NELLIE KOEBELIN 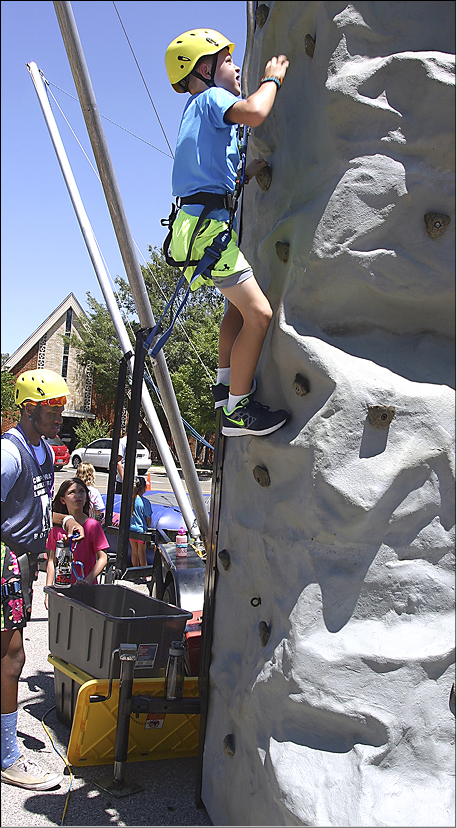