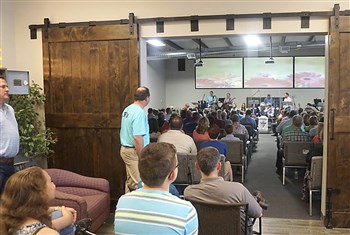 Two storefronts were combined in Claremore to create the Vessel, a satellite campus of First United Methodist Church.
BY CHRIS SCHUTZ
CLAREMORE, Okla. — Not yet a year old, The Vessel recently added a second Sunday worship service. This satellite of Claremore-First United Methodist Church symbolizes “a season of growth for this church,” said Senior Pastor Ray Crawford.
“We are always looking for ways to take the good news outside of the walls of our church,” Rev. Crawford said.
The “season of growth” shows up in membership numbers this year.
A total of 33 people have joined The Vessel, said Laurie Ault, who is First UMC’s administrative assistant. And the main campus counts 83 new members, including 20 people who came forward together one Sunday in Fall after a recovery group moved to the church. His House is a transitional living ministry in Claremore.
First UMC established The Vessel in January after church leaders decided the infrastructure of the main campus was becoming stressed – the sanctuary was nearly full and so was the parking lot.
“It would be difficult for us to grow too much beyond where we were,” said Crawford, who is in his 18th year with First.
After a church-planting workshop included ideas for creating churches in storefronts or diners, First UMC decided to try both.
The church did “a lot of discerning for eight or nine months” before deciding, Crawford said.
Then the Oklahoma Conference “affirmed our dream,” he said, when it helped out with funding through its New Faith Communities Ministry. “We took that as a serious affirmation that God was guiding us in this direction.”
Space for the Vessel was created by knocking out a wall between two storefronts. The building is on Claremore’s south side.
The satellite opened Jan. 15, and its 180 seats filled quickly. The second service was added Oct. 15.
The Vessel “was full out there almost from the very first Sunday,” Crawford said.
Jaimie Willis, who is campus pastor at the Vessel, described a couple of factors in the success of the new congregation. One is its “incredible” band, named glorifi. When the second service was added, musicians from within the congregation stepped up to help.
Another factor is the church’s “culture of hospitality.” When worshippers arrive, “people are there ready to greet you and smile at you and welcome you into church,” Rev. Willis said.
Adjoining the Vessel is a coffee shop called She Brews, which offers employment to women who formerly were incarcerated. She Brews also operates a shop downtown. Two women from that business are among members at the Vessel now.
First UMC also holds services at two restaurants. The goal is to add three more such sites over the next five years, Crawford said. The church guarantees a certain amount of food sales during a service, he explained, and people who come often buy more.
The diner services create a non-threatening setting for people who “for some reason have become de-churched,” he said.
The senior pastor said the church welcomes 890 people overall, or 1 percent of the Rogers County population of 89,000, to services at its various sites through the week. The current goal is to reach another 1 percent.
“We look at our parish more as our county,” Crawford said.
So far, First Church offers three worship services each Sunday at its central campus, two at The Vessel, and a Sunday evening service at the downtown She Brews shop. Also on the weekly schedule are a Celebrate Recovery service on Tuesdays and a casual service named The Bridge for people who are in recovery, those differently abled, and those who live in residential care centers. Early on Wednesdays, the ETA Coalition focuses on prayer and meditation on scriptures.
Making Disciples of Jesus Christ for the Transformation of the World