Devon Krause realized something was wrong at the Lord’s Table.

One boy’s trepidation was obvious to him during the ritual at Elk City United Methodist Church, where he is associate pastor and preaches in the New Day Service.

What Rev. Krause learned not only led to a change for Communion, but also reinforced a United Methodist principle.

The Church proclaims all people are invited to Christ’s table. But Krause discovered that young Elijah Hinds participated at great risk to himself. The tiniest bit of bread held danger.

Elijah, 12, is diagnosed with severe food allergies. He always carries an emergency injector.

"This is serious," Krause said. "We are so open to everyone coming to the table, but some people literally can’t come because of this."

The child’s condition prompted the pastor to act. He turned to Katherine Hinds, Elijah’s mom, to help research alternatives. Both Sunday worship services at Elk City UMC include Communion weekly.

Special allergy-free wafers now are an option in the ritual.

He recalled the surprise on worshippers’ faces when he first explained use of the wafers.

"This family has helped us to know that people in this community need that," Krause said. "I wish there was more awareness of this."

The church has offered the wafers for about a year.

"Now it’s a part of who we are," Krause said. "It’s such a simple act, but I think it has enormous power when we say all are welcome."

A support group for parents of children with food allergies meets at the church, and dozens of people attend. "It’s a growing issue," the pastor said.

Katherine Hinds said, "I was honored to be asked to help find an alternative Communion wafer. We were blessed to find a rice-based wafer." She also leads the Children’s Moment in worship.

For Elijah, the wafer must be free of wheat, gluten, corn, and nuts.

Across years and through tears, Elijah’s parents pursued answers and solutions for their sickly son, one of five children. In 2013, the Centers for Disease Control and Prevention reported food allergies increased among U.S. children by approximately 50 percent between 1997 and 2011.

"Finally we landed with a doctor who also had food allergies. Her love for helping children and her compassion for struggling mothers was just what God knew I needed," wrote Katherine.

In adolescence, Elijah is experiencing church youth outings, and his mother described letting him go as "an act of faith each time."

"You see, I’m OK with things as long as I have had ample time to create a safe environment," she admitted.

But parent and pastor see others walking with Elijah in Christian caring. His peer Alex Waters is among them.

Alex said he no longer liked peanut butter. Then the adults learned why.

"Because Elijah is deadly allergic to it, Alex couldn’t sit with him at school if it was in his lunch," Katherine explained. "I am finding God’s love and compassion in the heart of others." 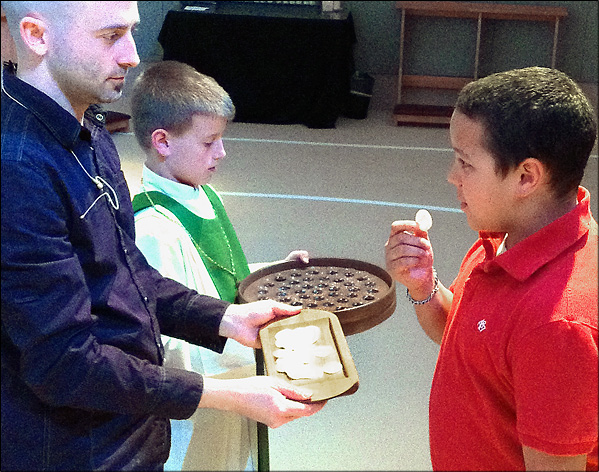