In the Oklahoman Panhandle, Guymon’s population has soared. Today’s population is younger and includes a lot of diversity. About 30 first languages are documented among Guymon’s school students.

One of the churches intentionally connecting with that changing population is Victory Memorial United Methodist Church.

On Jan. 26, the church received 34 people into membership in its Spanish-language worship service, as 120 people worshipped together on the second anniversary for the "Vida En Victoria" (Life in Victory) congregation.

"We accept and receive people as they are," said Jesse Gonzalez. "We love them. God does the changing."

Those simple words are how Gonzalez explains the fast growth of the service he leads as a lay pastor. The church’s senior pastor is Gary Holdeman, and Tino Espinoza is associate pastor.

Racial-ethnic groups abound in Guymon. Once dominated by Anglos, the demographics have shifted radically. A major industry, a pork processing plant, is creating jobs, drawing more people. The U.S. Census reports population grew from about 7,800 people, in 1990, to almost 11,500 residents in 2010.

There are Hispanic workers, whose families came from Mexico, Guatemala, Dominican Republic, Cuba, Puerto Rico, Honduras, and more. There is a significant Asian population that includes Chinese, Myanmar, and Koreans. Another large group: workers who were born in Africa, including Sudan, Somalia, and Ethiopia.

The Vida En Victoria congregation has become a church home to people from these diverse backgrounds.

The open face and open heart of Gonzalez show quite well why people feel at home here. But he is quick to say that "the Holy Spirit is the obvious reason for the growth."

The service he leads has adapted to the needs of the community, Gonzalez explained.

Rev. Holdeman said, "The service is indigenous. There is faster music and much joy." He added, "Jesse has extremely good pastoral skills in dealing with people."

"We shaped this congregation for healing," said Gonzalez. "We accept people as they are, looking for a church home, a family. The first thing they feel is they are at home, a family’s love."

That is no small feat for this burly lay pastor, simultaneously leading the service in Spanish and English. He grew up in New Mexico and didn’t speak fluent Spanish as a child.

His vision is of healing, of revival, and for new Christians to find the Way.

The Vida En Victoria service includes a praise chorus and lots of music. "The focus is put on God," said Gonzalez. "We preach to the needs of the people." There isn’t a lot of formal liturgy.

"The method changes," said Holdeman. "The message never does."

Ten years ago in Guymon, the Panhandle Hispanic Ministry of the Woodward District launched. Gonzalez and his wife, Mariana, joined, but then that ministry closed. Feeling a need for continuing in Christian fellowship, the Gonzalezes opened their home for Bible study.

Within a month, the group grew too large for the Gonzalez home.

So the group began meeting at Victory Memorial UMC, in a Sunday School room. They outgrew that space, too.

Worship attendance now averages about 70 in Vida En Victoria, meeting at 12:30 p.m. each Sunday. That service is the fastest-growing of three offered at Victory Memorial.

"People said it wouldn’t work, this combining, that there were too many differences," Gonzalez commented. "I knew in my heart it could. We just need to try to understand other people and be respectful, accepting everyone."

And Gonzalez said he has learned how to be diplomatic from Pastor Holdeman. "He’s very good at diffusing situations."

Gonzalez admits pastoral leadership isn’t always easy. Members seek him out for advice and fellowship. His house is usually full, always busy. He and Mariana have four children. He and another church member are attending the Oklahoma Conference’s Part-Time Local Pastors Academy, meeting in Woodward during this academic year.

And he holds a full-time job in addition to pastoring.

"But you need to always be there for the community," he explained.

This young pastor is seeing Christian relationships growing and leadership developing within the congregation.

Recently, as a member with a need spoke to Gonzalez, another person in the church family stepped up and said, "Pastor, I got this." 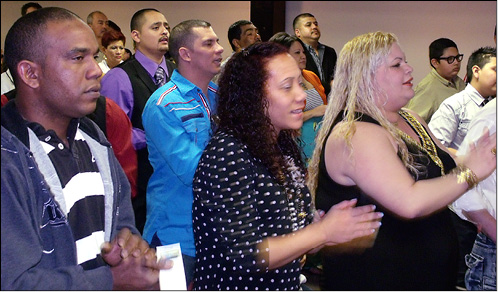 Enthusiastic worship by a crowd of 120 marks the second anniversary of the Spanish-language worship service at the Guymon church. 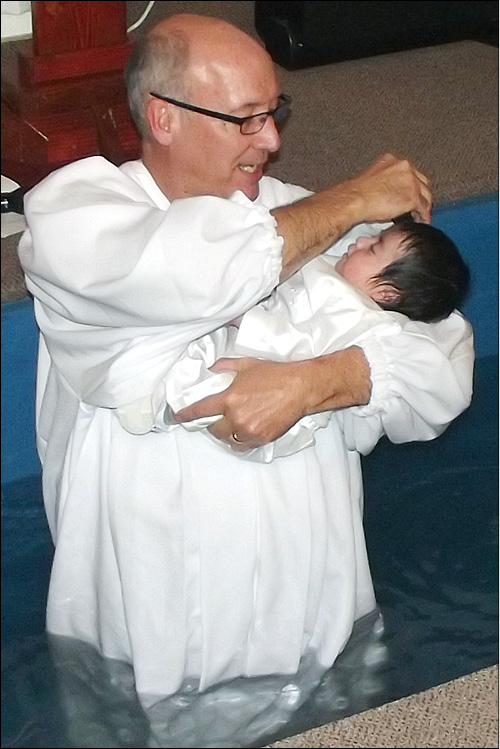