In 2013, OKC-St. Luke’s UMC branched out as three locations. The multi-site approach is bearing early fruit.

This church family established in 1889 now includes Fuente De Vida and Asbury congregations as well as the downtown home.

"We have definitely seen an increase in worship attendance and an increased excitement among the people," said Bob Long, St. Luke’s senior pastor.

"If you are sharing the love of Christ well and lives are being changed, people want to come," said Rev. Dr. Long.

One administrative council, one personnel committee, etc., oversee church life for all. Representatives from all campuses serve on those boards.

Long knows too well the denomination’s ominous statistics about the Great Commission to make disciples. He serves on the UM General Board of Pensions.

Long spoke plainly. "The General Board looks at statistics. It’s easy to see [the denomination has] thousands of churches that are going to be closed over the next 10 years. Should they have to be closed? Is there anything we can do about that?"

St. Luke’s Asbury completes a circle-of-life story. Long has learned that OKC-St. Luke’s contributed to a building fund for OKC-Asbury in the 1950s.

As the smaller congregation began declining in recent years, Asbury’s members worked hard to take care of the facility. Pastor Dawn Richards said the members’ "heartfelt desire" was to avoid closing the doors. She described the people as spiritually mature, willing to adapt so ministry there could continue.

Long concurred. "The pastor wanted to try new things, and the congregation said, ‘We’re willing to try.’ We kind of both felt led together."

She listed "wonderful" changes at Asbury since becoming part of St. Luke’s: Excellence in worship, lower administrative costs, more resources available to people in the neighborhood. A mobile health program was enhanced.

"Partnering enables us to do ministry at a higher level," Richards said.

Sunday worship features video preaching by Bob Long. Richards is the on-site leader at 1320 S.W. 38th. She describes the service as family-oriented and heartily endorses the video preaching.

"Good worship is No. 1 if we are going to grow this church," she said.

Richards named pastoral care as one of her spiritual gifts. "This plays to my strengths. I have access to specialists. I can really focus on making disciples for Christ."

St. Luke’s Asbury now offers Studio 222 South on afternoons, Monday-Thursday. It’s an extension of the acclaimed Studio 222 after-school arts program for children at St. Luke’s Downtown. After an art show and dance performance, "the kids were so excited that their parents came. You should see the difference in their lives," said Richards.

English as a Second Language and Financial Peace University are offered.

"There are so many stories of the children and youth we minister to, and now we’re reaching out to their parents," Richards said.

For the bilingual, multicultural congregation that is St. Luke’s Fuente De Vida, "Sunday morning attendance has gone up by 40 percent since we became an official satellite campus," said Pastor Wendi Neal.

"Now we’re confident about our future and the direction we’re going. We have access to resources; we have the same mission.

St. Luke’s mission, "Share–Grow–Serve," is printed in Spanish and English on T-shirts.

"All of it together has created a very positive environment," said Rev. Neal. "Our members are inviting others."

OKC-St. Luke’s and OKC-Hillcrest Fuente De Vida had been in relationship since 2009. Unification was celebrated on June 30.

The majority of members are "early 30s and twentysomethings with children," Neal said. Worshippers sing bilingually. The children’s sermon is presented in English only.

Video preaching by Dr. Long is not used. But Neal uses the same Scripture and theme.

"All of us are striving to provide excellent worship," Neal said.

"We are the only United Methodist congregation [in the metro] that offers worship and Bible study in Spanish, so we reach people all over the area."

Fuente De Vida offers Financial Peace University, and some parents bring their youths to learn alongside them, the pastor said.

This year, the church plans to start small groups in other locations, perhaps at a school or restaurant. A Confirmation class will meet.

"Don’t be afraid to try," Neal advised any congregation. "Try different things. How else are people going to connect and grow?" 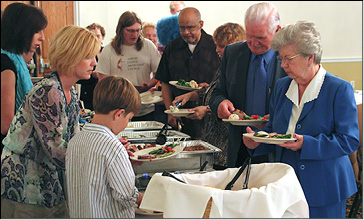 Above, Asbury members dine together as they commemorate their heritage. Below, a family worships at Fuente De Vida.