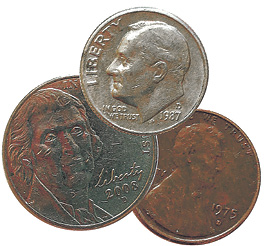 What does $1 do? Much of that dollar makes possible the work of your local church. Treasurer Brian Bakeman said 16 cents goes to the connected ministries of the Church.

In 2013, United Methodists gave the most money ever to the Oklahoma Conference for the Church’s work in the world. Yet Apportionment collections slid to the lowest percentage in years.

Delight in those achievements dims a bit upon learning that Apportionment receipts declined to 93.55 percent. That is down from 94.35 percent in 2012.

Rev. Bakeman gives careful attention to context as he studies the 2013 numbers. "The most we’ve ever collected in Apportionment dollars: that’s something to celebrate. We didn’t do quite as well as we did last year, but we’re still healthy."

He met in late January with treasurers from the other annual conferences of the eight-state South Central Jurisdiction. "Other treasurers, they look at Oklahoma as one of the strong conferences in the denomination. It’s exciting to be part of that," said Rev. Bakeman. "Our payout is substantially higher."

Across the United States, as of Feb. 5, the overall average for annual conferences’ Apportionment receipts was 87 percent in 2013.

Oklahoma ranked fifth highest among 37 annual conferences that had reported those 2013 percentages as of Feb. 5.

Oklahoma Indian Missionary Conference, not yet in the listing, consistently contributes 100 percent.

The chart also showed that percentages increased in 17 of the U.S. annual conferences reporting.

Bakeman was pragmatic about Oklahoma’s statistics.

"The churches are working hard to support the connection," he said. "I sense we have a lot of communities and congregations that are struggling financially. Because of that and because of declines in population, some churches aren’t blossoming like they could."

Bakeman continued, "We are collecting a bit more money, but the percentage of collections is dropping. So CF&A (the Council on Finance and Administration) is working hard, refocusing our finances for church growth. You have to have increased members to increase the income."

The treasurer expressed great thanks to the Woodward District, where all but one church paid 100 percent of their Apportionments.

"What a wonderful goal as a group, as a collective, to say the Woodward District did its best," Bakeman commented.

Giving was 92 percent for Saint Paul School of Theology at Oklahoma City University. Bakeman said that surprised him "in a good way. We understand that the smaller the apportionment, usually the higher the payout; it’s easier to pay."

Bakeman also noted that costs for clergy pension benefits are less this year for local churches.

The best way for a local church to meet its Apportionment obligations, Bakeman advised, is to include that amount in the church’s budget and pay on it every month.

"Start planning now, instead of waiting for the fall," he urged. "I wish churches were more deliberate in considering apportionments as part of their operating expenses, rather than as an afterthought."

Resources are available to help you tell the stories and celebrate the missions and ministries of the connectional UM church. Find them at www.okumc.org and www.umcgiving.org. Contact the Treasurer’s Office or Communications Department, toll-free: 800-231-4166.