That’s a 92.66 percent collection rate for Apportionments. These funds enabled a vast array of ministries, far exceeding what one United Methodist church can accomplish alone.

By giving 100 percent to all Apportionments, imagine how much more Oklahomans can accomplish for the glory of God in 2015:

– Resourcing 10 projects, two new and eight ongoing, that are making new disciples at a rapid rate. Two projects reported 45 professions of faith since the beginning of the year.
– Awarding scholarships to church planters to attend the annual School of Congregational Development.
– Providing resources to reach people of Asian heritage, especially through Edmond Chinese International UMC, Korean-language churches, and the Chinese student ministry at the University of Oklahoma. – Providing Continuing Education opportunities to more than 600 clergy, for a total of 7,215 hours of training.
– Preparing 11 clergy to be ordained, and 18 to be commissioned as Provisional Members. – Awarding scholarships to 32 students at six seminaries.
– Helping full- and part-time Local Pastors attend Course of Study School. (In 2014, BOM assisted 29 in this goal.)

"Young campers learn new skills, make new friends, hear the voice of God, and respond to that call. That’s too important. I don’t want to turn a child away because there’s not enough money," said Ed Parker, Camps executive director. (In 2014, the Conference’s three facilities hosted 18,536 campers of all ages.)

In January, Treasurer Brian Bakeman told the Council on Finance & Administration (CFA), "Most people think about Apportionments in the same light as operating budgets. It is usually easier to raise specific dollars for mission or special projects than it is for operating budgets."

In a Contact interview, Tom Junk concurred. "These images are easier for people to get in their minds. It’s harder to paint the picture for what Conference administration does."

However, "without administration and the structure of the Church, we don’t have the platform and mechanisms to respond when there is need."

Junk chairs the CFA, and he has served about a year as a director of the General Board of Global Ministries, including the UMCOR emergency committee. This member of Tulsa-First Church sees directly how Apportionments support God’s work at all levels of the denomination.

Perhaps the examples in this story give some clarity to where Apportionment money goes in Oklahoma.

"I think as the successes of the New People New Places initiative become apparent to us, and as new disciples are made because of those projects, that our stewardship is going to be encouraged," Junk said.

Bishop Robert Hayes Jr. consistently vows "to finish strong" in all areas. At the January CFA meeting, he questioned the ongoing decline in Apportionment receipts.

"We’re affecting these wonderful ministries we have across the state," said Rev. Bakeman.

Several ministries, including Circle of Care and Cookson Hills Center, typically receive more than 100 percent of their Apportionment requests. But even those receipts fell in 2014.

Circle of Care Apportionment support slid below 93 percent, missing the agency’s $700,000 budget by about $49,200. Receipts for the Okhoma City University Apportionment were reported at 85 percent, leaving a budget hole of $145,291.

Annual Conference delegates approved a lower Conference budget for 2014, which in turn lowered the total Apportionments requested from churches ($16,663,047). And among Oklahoma’s 30 largest churches, based on their assigned Apportionments, all but four gave 100 percent that year. 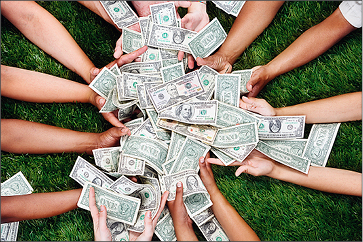 View and download a 1-page "2015 Conference Apportionment Guide" at www.okumc.org/ApportionmentInformation