DEDICATION IS APRIL 18 — We’ll celebrate completion of the latest major building project at Canyon Camp, near Hinton, at 1 p.m. that Saturday. The Foundation Cabin, above, and the Paul & Ann Milburn Cabin already are welcoming lodgers. Plan to take a tour and enjoy hamburgers and hot dogs after the service.

The upcoming dedication of Canyon Camp’s new cabins, on April 18, confirms this is a milestone year for Oklahoma United Methodist camping ministries. You’re invited to the celebration.

His answer won’t be the building design or furnishings. He immediately acknowledges the many individuals and groups whose donations funded the construction and furnished the spaces.

Some of them will attend that Saturday dedication ceremony, at 1 p.m. Then hamburgers and hot dogs will be served. The public is welcome. To assist meal planning, RSVP to the camp office, 405-542-6967, by April 13.

On Jan. 1, the Paul & Ann Milburn Cabin and the Foundation Cabin opened their doors.

The first lodgers were a youth group from OKC-Church of the Servant and the young people attending a North/South Oklahoma City Districts’ program, according to Combs.

At 3,000-plus square feet, each has a large central meeting room and two wings for lodging 30 people total.

In the meeting room, walls of windows at front and back admit lots of natural light. Six ceiling fans circulate air. A kitchenette provides refrigerator, microwave, sink, and plenty of electrical outlets.

Canyon Camp’s oldest buildings were constructed about 60 years ago.

According to Combs, "What can we build that will last another 60 years?" was a key question for trustees.

"The design is very well thought out," Combs said.

The metal exterior is virtually maintenance-free, he said. The metal roofing will outlast shingles. Windows are double-pane.

Separate mechanical units heat and cool each wing. "You could have a group stay on just one side, and won’t need air or heat going in both," Combs explained.

Access to the meeting room and two additional bathrooms is directly from outdoors. Guests don’t walk through the sleeping areas to reach them.

A tour of Canyon Camp reveals more improvements. An electric utility cooperative has built an emergency access road to the lighted cross atop the canyon walls. And soon a long, paved sidewalk will stretch beside much of the main camp road, on the grassy field side.

The United States Department of the Interior has designated Canyon as a National Natural Landmark. The church camp facility, southeast of Hinton, is about an hour’s drive west of Oklahoma City. 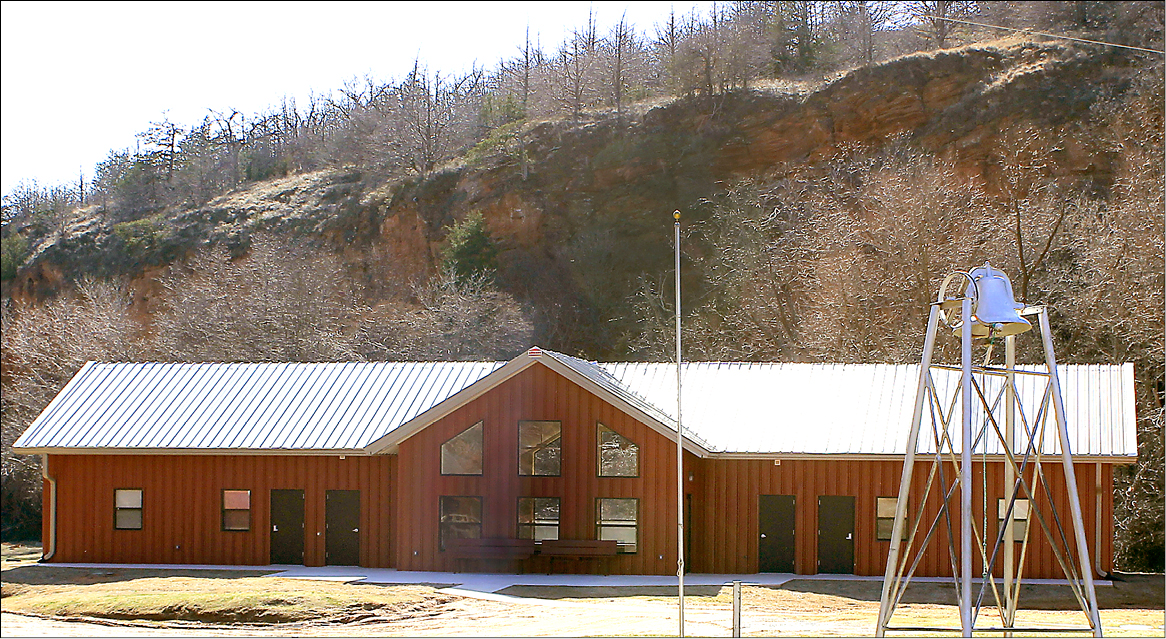 Canyon Camp’s landmark bell sits near the Paul & Ann Milburn Cabin. Through the big windows of the central meeting room, you’ll glimpse the red sandstone walls of the canyon rising behind the new building.

The two new cabins are identical. Here are interior views. Light floods the central meeting space. Bunks form an interesting pattern; each bed has a built-in storage shelf. Each shower stall is outfitted with two curtains, to separate washing and dressing spaces.