‘God has led me to know: You’re doing
exactly what I want you to’ – Kristina Thorson

Washington is Kristina Thorson’s home state. The young-adult missionary intended to go to Africa. Yet she is serving in Oklahoma City at St. John’s UMC.

How did that happen?

Tears suddenly brim. The emotional response is because she knows she is in the right place.

As a college senior, Kristina applied for the Young Adult Ministry Program of the General Board of Global Ministries (GBGM). She knew God’s plans for her included "stretching" her boundaries. She sought experiences that she thought unlikely in the United States.

"I can only imagine that God was laughing at this," she wrote online at lifeasaus2.blogspot.com.

She attended an interview and discernment event in Oklahoma City. Her outlook changed. Instead of telling God where she wanted to serve, she began praying, "God, send me where you need me."

She graduated with a B.S. in family studies and was commissioned in August as a United Methodist US-2. These young adults serve two-year terms in the United States, working with the poor, growing in faith as they address injustice and suffering in the communities where they are assigned.

On Dec. 1, Kristina posted on Facebook, "Leaving behind Seattle, for my new life as a missionary in Oklahoma! God says, ‘Go.’ Therefore, we go!"

On Jan. 21, she welcomed nine children on opening day for The Gallery at St. John’s, an after-school arts program for third-graders from two nearby schools.

Kristina is the director. The lead artists are Guatemalan folk dancer Hilda DeLeon and Mexican painter Carlos Tello. The program is a fusion of Spanish and English languages.

The Monday-Thursday program is based on Studio 222, a highly successful after-school ministry by OKC-St. Luke’s. Carlos Ramirez in the Conference Office of Mission facilitated a connection between the two churches.

St. Luke’s "taught us how to do it," said a grateful Rev. Ramirez. He coordinates Hispanic/Latino Ministry for Oklahoma through GBGM. St. John’s neighborhood has a large Hispanic population.

In addition to the arts, The Gallery will teach the children life skills and seek to build character, said Pastor Murray Crookes of St. John’s. The schedule will include nutritious snacks and time for completing school homework.

Rev. Crookes said The Gallery will "provide them a place where they can belong, so they are less likely to detach from the system." His vision for the program includes an identity that parents embrace, too.

Later in the school term, St. John’s will host a sale of the children’s art. "It gives kids a sense of helping ‘their place,’ [and] authenticates their effort," Crookes said.

Rev. Goggs said she is excited about the great potential for the new program. Kristina’s presence already is having an impact, she believes.

"They were so welcoming!" she declared.

She began assembling a puzzle with a child. Now more children attend New Journey, and puzzle-solving is only one activity Kristina leads for them.

Kristina led her own family into church life when, as a teenager, she became involved at a church. Her mother recently served as an interim camp dean. Her father provided her business cards that announce "Doer of neat things!"

Just prior to Kristina’s arrival, St. John’s closed its long-running childcare program due to lack of enrollment. That opened more spaces in the church for The Gallery activities. Kristina and helpers busied themselves cleaning and transforming rooms.

"You don’t think about the impact you make on people until you step back," Kristina said. Her eyes again grew wet as she spoke of a squealing child hurrying to greet her at St. John’s after Kristina had traveled home for Christmas.

"One big life lesson God has led me to know: You’re doing exactly what I want you to," she explained. "It’s not going to turn out like we expect, but will be better." 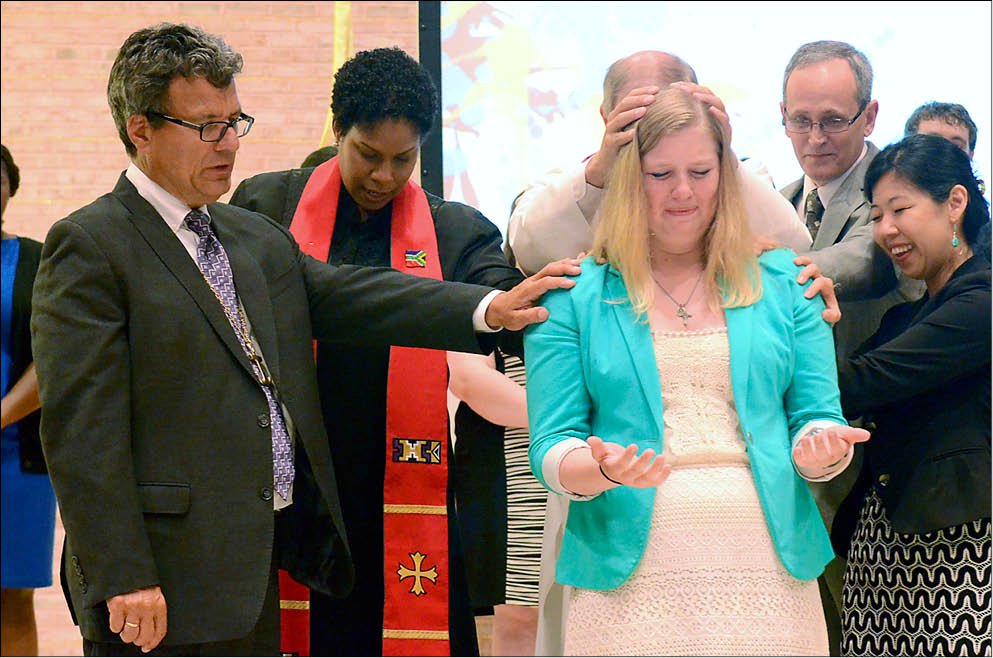 Kristina Thorson’s joy pours out as she is surrounded and blessed for the US-2 program of the General Board of Global Ministries. On Aug. 12 in New York City, 29 young-adult missionaries were commissioned. The closing liturgy included: "We are agents of change, open to God’s transforming power. We are Generation Transformation." 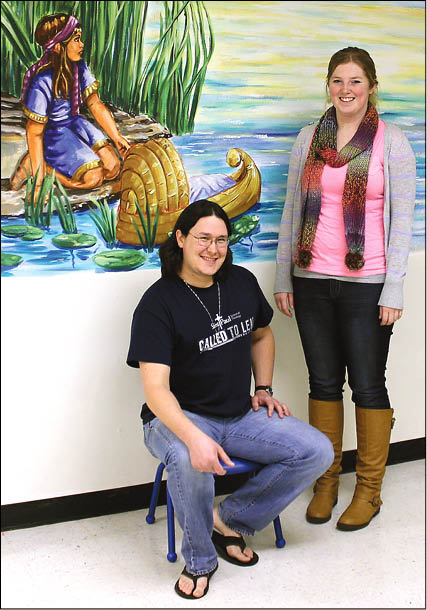 Preparing to welcome third-graders to The Gallery at OKC-St. John’s are Pastor Murray Crookes, seated, and US-2 Kristina Thorson.