Workload is reduced, but the Church’s disaster response continues after the deadly May 2013 storms in the state’s central region. United Methodists vow to serve "until recovery is complete" after disasters.

The shrinking list of needs indicates we are closing on that goal in Oklahoma.

Among 4,000-plus family units impacted by the tornadoes, 450 to 500 cases remain open, according to Kevin Walker of Moore.

He is a project manager for the Oklahoma Conference’s UM Disaster Response ministry and currently directs volunteer and contractor deployments.

"Any one particular recovery plan for a homeowner may take months and even years to complete," Walker said. "This can be demanding mentally and physically on the staff and victims. We hit delays or discover unseen damage."

One Volunteer Reception Center, in Moore, remains in service. Centers at El Reno and Shawnee have closed.

Today more construction professionals are in the field, and fewer volunteer teams. The caseload has declined for trained case managers who assist people one-on-one.

This collective Oklahoma Disaster Recovery Project (ODRP) "allows things to be more seamless, working more efficiently," Walker said. Groups desiring to help "are not overrunning one another" in the field.

He also noted that not all needs involve construction. Some people receive counseling; some families need items such as cars and specific clothes.

A year ago, Walker said, at least one volunteer team was on site every week, and school Spring Breaks in March 2013 brought multiple teams per week. Currently, no teams are scheduled on some weeks.

"In the end, forging a relationship and restoring home and life to what it was before the storms make the long days and countless hours of this wonderful ministry worth it," Walker said. 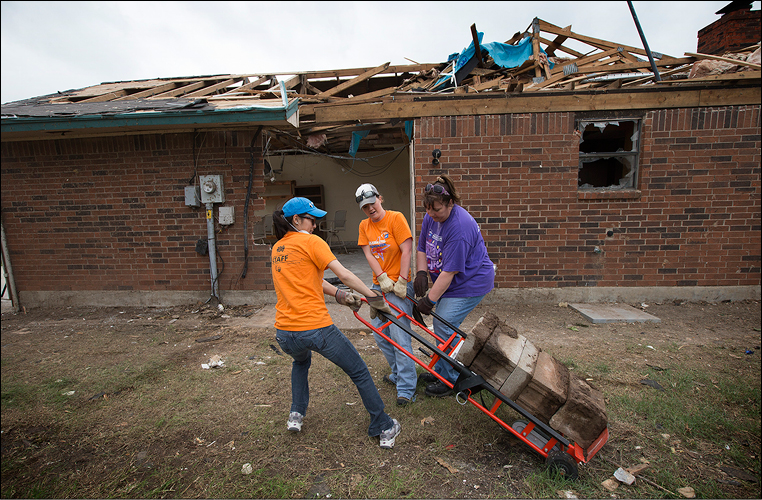 Members of a volunteer team remove concrete rubble from the home of Ronald Samaniego. From left: Jennifer Morgan, Mel Rogers, and Stephanie Birdwell deployed through Moore-First in late May 2013.

Ashley Brandt provided statistics about the generosity poured out by people and groups for the tornado survivors. She is volunteer logistics coordinator for ODRP.

That collaborative reported 3,298 volunteers have deployed through the Oklahoma Conference’s UM Disaster Response ministry since ODRP opened in September 2013.

• Others: 28 Presbyterian teams and 26 groups from colleges and both faith-based and nonprofit service organizations such as New York Says Thank You.