Self-described historians Joe and Beverly Sanders are doing their part to record the history of their church, McFarlin United Methodist in Norman, through the spoken memories of others.

The Sanderses are participating in an oral history project of the Commission on Archives & History of the Oklahoma Conference.

For archival purposes, the Commission is collecting video interviews of Oklahoma United Methodists discussing their churches’ history, said Jerry Gill, who is helping coordinate the project.

The Sanderses are dedicated to compiling a record of McFarlin memories, said Joe Sanders. He operates the video camera while his wife asks the questions.

They are longtime members of McFarlin UMC, and even wrote the book "With God’s Help: Building the McFarlin Church." It was self-published by the church.

The church was founded before the Land Run of 1889.

Part of the current building dates to 1924, Joe said. It was financed by rancher and feed store operator Robert M. McFarlin. Oil was discovered on land that he owned near Holdenville. Income from drilling gave the Norman Methodist the means to support building a church in memory of his baby son, who died of typhoid fever. McFarlin’s son, also named Robert, is buried in Norman’s IOOF cemetery.

Current McFarlin UMC members will be able to tell the story of a $6 million addition to the east side of the church, completed in 2001 after a number of delays, Joe said.

The Sanderses have completed about 20 recordings and several more are ready for processing, said Beverly, a retired math teacher.

"It’s so important we get these done before people die," said Joe, a military retiree.

Beverly said she’s learned that people have varying attitudes about being interviewed. "Either they’re all for it, or they’re people who simply do not want to talk about themselves." Others are shy about talking into a microphone and try to recommend someone else to interview.

In some cases, interviews go better if a husband and wife are filmed together and are able to prompt one another about details, she said.

In the course of making these video recordings, she’s noticed, "Don’t have a pre-formed expectation of what you’re going to learn in the interview."

The Commission has video equipment for loan to United Methodists who are interested in recording interviews.

The recordings will be placed in the Conference archives, housed in the Dulaney-Brown Library at Oklahoma City University, and at the Oklahoma History Center.

"It’s part of our effort to tell our Methodist story," said Gill, who serves on the Commission on Archives & History and has a doctorate in history. A member of Stillwater-First, he helped that church secure recognition as UM Historic Site No. 489.

From the Oklahoma Conference Archives

In this 1889 photo showing First Methodist Church of Oklahoma City (Methodist Episcopal (North) denomination), one of the men pictured is A.G. Murray, its first minister. 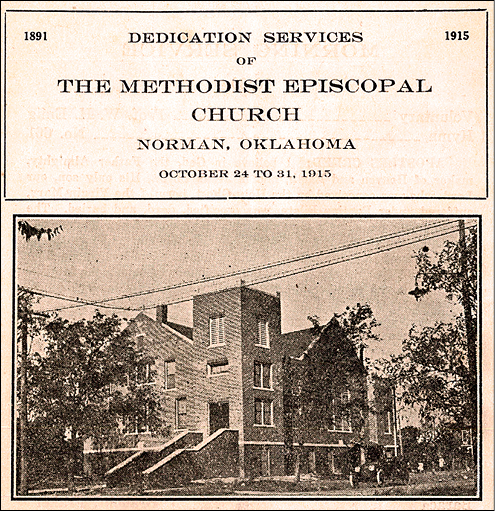 A 1915 bulletin cover shows the Methodist Episcopal Church-South in Norman. A major renovation was celebrated on that date. The church later was renamed McFarlin Memorial.