2/13/2015
Pray for those who receive and those who give as you watch a new YouTube video about the Kaplans’ mission.

The man was hoping for a pair of jeans. In January, he stood in a line of about 10 people in a grassy parking lot, near an SUV with its distinctive sign: "The Ice Angels."

Lenny and Mary Kaplan’s outreach to people who live on the streets of Oklahoma City was inspired one hot summer day several years ago.

As the couple drove to a church service, "I noticed a group of rather disheveled people gathering around a local fast-food drive-in. The temperature was 98 degrees at 10:30 a.m. By the time we left from church, the temperature had climbed to 112 degrees," Mary wrote in an account of how their project began.

They hit on the idea of putting ice and bottles of water into their cooler and distributing the cold water to people on the streets. And one of the people they served dubbed them The Ice Angels.

"That was a life-altering happening," Mary said.

Their project began to expand when one person said, "Thank you very much for the water, but what I really need is some food. I am hungry."

With help from their church, OKC-Epworth United Methodist, and others, the Kaplans began to distribute lunches, along with clothing, shoes, toiletries, and other donated items.

"Without the help of local churches, none of this could be possible," Mary said. The two credited New Life UMC in Moore, St. Matthew UMC in Midwest City, and OKC-Leland Clegg UMC as among others that support the Kaplans’ ministry.

Lenny, a former health advocate for AIDS patients, once lived on the street himself. Mary is a retired nurse. They said they spend time every day on Ice Angels work. Sometimes, they help transport those who are homeless to doctors’ appointments.

The Kaplans also encourage those they meet on the streets to connect with Oklahoma City’s Homeless Alliance, which focuses on getting housing, counseling, and medical care for people without a permanent home.

Every Wednesday, the couple goes out to distribute food and other supplies to the people, who have learned to watch for that red SUV.

There is a constant demand for the items they provide — new and used clothing, shampoo, disposable razors, socks, and underwear, Mary said.

Among the items packed into the back of the Kaplans’ SUV are unusual sleeping mats, hand-crocheted by volunteers using plastic shopping bags. Each mat requires about 700 plastic bags and a hefty Size Q crochet hook to make. Other volunteers take on the task of cutting the bags into strips and getting them ready for the crocheters.

The bags "are a much-requested and appreciated item," Mary said.

The parking lot deliveries create what Mary calls a "Walmart of the street" for those who are homeless. In addition to The Ice Angels’ provisions, a person can pick up a box of food from a Regional Food Bank representative. Someone else gives out pet food for the four-legged best friends that accompany some people.

Lenny estimated The Ice Angels help 200 to 250 people a month. "It’s grown from just water to this," he said. 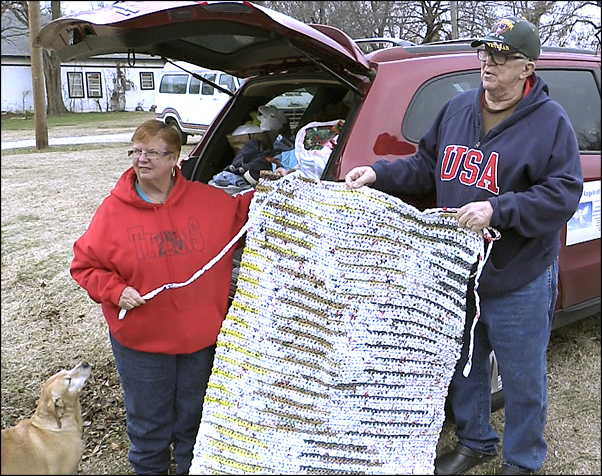 Mary and Lenny Kaplan show off a sleeping mat that was hand-crocheted from plastic grocery bags. The mats, which offer some cushioning and protection from the hard ground, are much-requested by people who live outside.
Making Disciples of Jesus Christ for the Transformation of the World