In amounts from $10 to $100,000, gifts have added up to $3 million to provide seminary scholarships for Oklahoma United Methodist clergy.

Through the generosity of individuals, families, and churches across this Conference, scholarship recipients can focus on their education and begin ministry careers unburdened by seminary debt.

Jay Smith is the first Foundation Scholar. He attends Asbury Theological Seminary in Wilmore, Ky., through its Extended Learning Program. He is an associate pastor at Edmond-New Covenant UMC.

"I am humbled by the generosity of so many that has made seminary a reality for me today. It is an honor to be the first recipient," said Rev. Smith.

Three Bible passages illustrate his call to ministry, he said.

"I want to model" the love for God’s people and the Church that Paul expressed in Philippians 1:3-11. "It’s a deep love that comes from God only, that I can’t make on my own," Smith said.

Acts 2:42-47 reminds him of the unique fellowship of believers, which drew people to them and, ultimately, to God.

And Smith signs email messages with his third selection: "Forgetting what is behind and straining toward what is ahead…" (Philippians 3).

What he calls his "Aldersgate moment" came when he was a high school junior. "In all of my 17-year-old certainty," he said, he planned a youth ministry career. And for more than a decade, that was his field of work, at various churches.

When he began working at New Covenant Church, his duties expanded.

Conversation and opportunities "exploded my call and diversified it," Smith said. In 2013 he was assigned to pastor a new worship service at the church, and "I realized this is what God is leading me to be."

Smith said the Foundation scholarship is a blessing for him and his family. "I take this honor with a deep sense of responsibility and will continue to work diligently to represent the vision of the Foundation and the gifts of so many. "

To obtain a Master of Divinity degree accredited by The United Methodist Church, a candidate must complete 80-90 hours of theological education in addition to the undergraduate degree. The financial cost can discourage potential seminary candidates or cause them to graduate with substantial debt.

"This is a great day," Robert Long said about the success of the endowment campaign. He chairs the Oklahoma United Methodist Foundation’s Board of Trustees and is senior pastor of OKC-St. Luke’s.

At the 2014 Annual Conference, he had encouraged lay and clergy delegates to announce the Pastor Education Fund in every church.

"The gifts that have been made today will strengthen the church of tomorrow," said Rev. Dr. Long in January. "All of those who have given and the United Methodist Foundation have made an investment for developing leadership that will inspire our church in its mission to share Christ."

Trustee Paul Milburn of Shawnee approached the Foundation about the need for a fund to provide scholarships for ministerial students who exhibit exceptional aptitude for pastoral work. His desire was to establish a $2 million endowment by providing matching funds up to $1 million.

Trustee Richard Small of Tulsa caught the vision and offered an additional match of up to $1 million.

"Because of the two-for-one match offered by the Milburn and Small families, we now have a $3 million endowment that will help in the seminary education of clergy for generations to come. This is a significant success and we celebrate that success," declared Bill Junk, president of the Foundation.

"Many of you made significant contributions to this drive, and I am deeply grateful for your faithfulness and generosity."

"These seeds have fallen on good soil because these people have been so generous to step forward and offer some of their resources that challenged us. Now we are reaping the fruit," Hayes said.

"I’m delighted that we reached this point where we can claim success."

He expects the Pastor Education Fund to strategically change how the Conference finds exceptional pastors.

Each Foundation Scholar will enter into a covenant agreement with the Oklahoma United Methodist Foundation to work in a church while attending seminary and to serve as an Oklahoma Conference pastor under appointment for a minimum of six years after graduation.

"It’s not out of the ordinary that someone be given a waiver on their debt in exchange for serving," Hayes noted. Similar agreements secure physicians for some rural communities, for example.

The bishop clarified, "This is an investment. If they decide to leave before the six years under appointment, they take the balance of the debt with them." However, "if we can have that person in ministry, engaged in work that really challenges and inspires, we won’t have to beg them to stay."

If you are being called by God to serve in a church and want to seek a scholarship from the Pastor Education Fund, the first step is to complete the online application at www.okumf.org/pefapp. 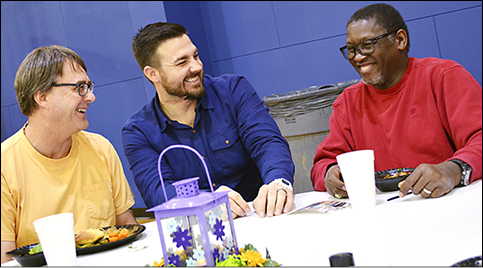 The Midweek Meal at Edmond-New Covenant creates fellowship time for, from left: William Pruitt, Jay Smith, and Johnny Floyd. Foundation Scholar Smith is among those who cook and serve meals, and he teaches a Disciple class.