What is a missional strategist? Where is God in this realignment work? Bishop Hayes and Superintendent Greg Tener offer answers in a new YouTube video

District names and superintendents have been announced for the eight new regions that will reshape the Oklahoma Conference map.

Among next steps are organizational meetings in April and early May, for each of those eight districts, as Oklahoma United Methodists count down to June 1. That’s when the new structure becomes official.

This list identifies those districts and the superintendents appointed by Bishop Robert Hayes Jr. to lead them.

The term "Green Country" long has been used to promote tourism in the state’s northeast. And prairie grasses and numerous lakes surely shape the landscape in two districts.

Stretching in the state’s southwest, the Wichita Mountains bear the name of the Native people who reigned in that region long ago. The Wichita and Affiliated Tribes government complex is near Anadarko.

The shape of Heartland District does resemble its moniker somewhat, and major roadways meet in the appropriately named Crossroads District.

The geography of the Cimarron District includes a similarly named river and the state’s highest point, Black Mesa, in the county by that name. In the far western Oklahoma Panhandle, that county is populated by 1.3 people per square mile, according to the 2010 U.S. Census.

The Council Oak District includes a location of great significance to Native Americans. In Tulsa, the Creek Council Tree Site is listed in the National Register of Historic Places.

These new district names will represent all churches well, the Cabinet agreed. Inclusivity was valued over districts defined by specific city names.

A full-time District Administrator will be hired for each new district. Job descriptions were being finalized as this issue of Contact went to press. The Conference Treasurer’s Office will soon begin accepting applications for those positions, Treasurer Brian Bakeman said.

Transitional procedures began wholeheartedly after lay and clergy delegates at the 2014 Annual Conference voted to realign from 12 to eight districts.

Celebrations were held in conjunction with some Final Conferences. On Jan. 25, Bishop Hayes preached at the Enid District event.

Both Hayes and Superintendent Donna Dodson shared historical stories. Rev. Dodson said Enid-First Church held its first worship service on the courthouse lawn. Another church in the district built a sod house with canvas roof for its first sanctuary. And in the early 1900s, an offering total of 15 cents "was a great day," she noted.

Both leaders also turned attention firmly to the future.

District borders will change, but "the work is continuing," Dodson said, including Lay Servant training April 18 and CLEW District Youth Camps in summer.

"Be bold, brave, and adventuresome in this 21st century, like the pioneers," Dodson said.

The bishop declared, "We’ve set the course, but we understand where we end up belongs to God."

Hayes and OKC-South District Superintendent Greg Tener in late January discussed the vision that steers this missional realignment of districts. Here are excerpts.

Q. What does missional strategist mean? This is part of the job description for superintendents of the new districts.

Bishop Hayes: The missional strategist paints the picture of how ministry can look in this setting or this place. We need to paint this picture of a different kind of future. We need people who will be able to provide the paint and brush and canvass to do that.

Q. Are mission and ministry interchangeable?

Rev. Dr. Tener: Like the chicken and the egg, which comes first? They’re simultaneous.

Bishop: In a lot of places in Oklahoma, churches know how to do ministry; they do it very well. We’re going to find out what makes this so successful so we can duplicate that.

But there are some places, and too many, where people are fearful about their future. They have built this moat mentality where they pull the bridge up. We’ve got to leave the building and go out and do ministry.

Q: What is the role for laity in this vision? The work at this point seems mainly to involve clergy, such as facilitators for Missional Areas.

Bishop: If you look at history, early on most churches only had pastors every 30-60 days. (But) the work of the church had to go on.

We have pastors convening these groups, but the laity will carry the ministry in these places. This realignment, this missional strategy is going to involve them in ways they never imagined.

We’ll have people talking to one another, getting to dream, to think about what this picture ought to look like for "my church." I’m hoping that people who have sat on the back row will move up and take their place in leadership.

Tener: It may look clergy-driven right now because the Cabinet is writing the documents about the roles of convening elder, of laity, of what a Missional Area looks like. Transitional Teams are roughly half (laity) and half (clergy). We know laity are very excited about the possibility of being involved in missional work.

Q. Where do you see God with us in this change?

Tener: The image that comes to my mind is the Christian Life Center at St. Luke’s, full, last year at Annual Conference. A lot of difficult questions. Even with those, there was excitement that "we are going to do something new." I sensed the presence of God in the room that day. As conversations have continued, that sense of excitement that God is at work continues.

And we’re changing for the purpose of reaching new people with the Gospel of Jesus Christ, not just because we want to change things. What is it that we can do together for the good of God’s Kingdom and the Church that we couldn’t do on our own?

Bishop: This project has got to be Spirit-led. You can reorganize and plan, but if it doesn’t have the Spirit of the Living God in it, it’s not going to survive. Our allegiance is to Christ. 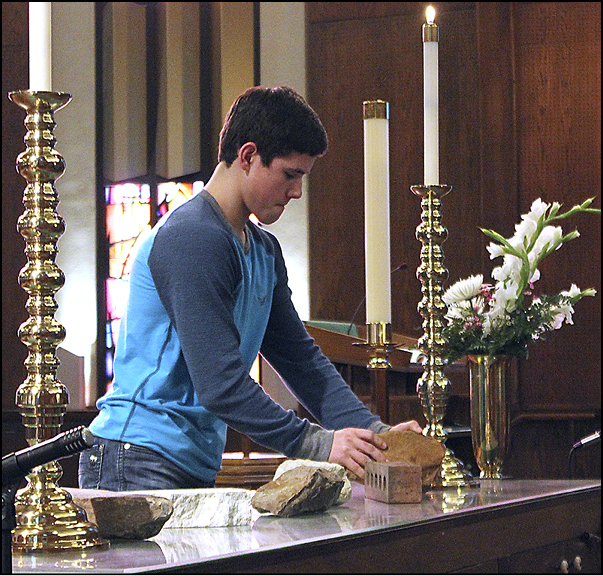 Emulating the Old Testament people who stacked stones to mark where God blessed them in their journeys, Jeremy Wilcox on Jan. 25 places a rock representing Kingfisher UMC on the altar during the final Enid District Conference.