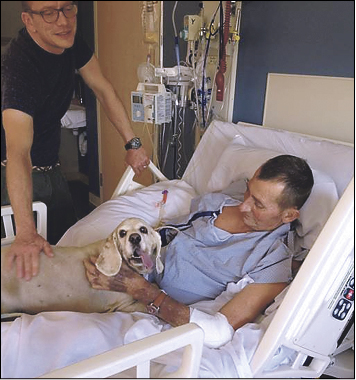 While hospitalized and at Epworth Villa, David Holmes got regular visits from his dog Winnie.
Photo courtesy of Epworth Villa

"I wake up every morning and say, ‘Thank you for another day.’ I feel very fortunate," said the Oklahoma City resident.

Holmes served in The Village Police Department for 24 years before retiring as a lieutenant. He had prevailed against danger during his law enforcement career, then a sudden medical crisis became his biggest challenge.

Among those who rallied to help him were therapists at United Methodist-affiliated Epworth Villa. This nonprofit retirement community also offers short- and long-term rehabilitative care.

As a police officer, Holmes was trained to be aware of his surroundings. But one August afternoon, he realized he was sitting in his front yard and didn’t know how he got there.

That morning he had taken his cocker spaniel Winnie on their daily 3-mile walk. Exactly what happened on that walk — or how he made it home — remains a mystery.

What he did know was that after 62 years of complaint-free health, his body seemed to be betraying him. Just weeks before, Holmes had been diagnosed with small lymphocytic lymphoma. Doctors had assured him it was an easily treatable form of cancer.

But something more was going on.

Holmes was hospitalized, and doctors discovered why he was experiencing disorientation. He had contracted West Nile Virus, possibly from a mosquito-infested pond near his walking route.

Holmes was in a fight for his life. Suffering from inflammation of the brain, he was in a coma for weeks.

"The nurses and doctors told my family to say their goodbyes," said Holmes. "They didn’t think I would ever come out of the coma."

Holmes awoke from the coma, but his physical strength was almost entirely gone.

"I thought I wasn’t going to be able to do anything again, not even walk," he said.

After two hospitals and another rehab facility had done all they could, Holmes’ family arranged to move him to Epworth Villa in north Oklahoma City.

"They took me in on a stretcher," said Holmes. "I had no strength."

Occupational therapist Amber Bell remembered, "He couldn’t stand on his own. He required complete assistance just to dress himself."

"One of his goals was to get home to his dog, who was getting older," said physical therapist assistant Jeannie Camp. "He felt the need to be there to take care of him."

And until Holmes could get home to his dog, the dog came to the center to visit her owner.

"We would bring Winnie down to see him about once a week, and he would smile every time he saw him," said Kathy Terry, Holmes’ sister.

Other Epworth Villa staff members were part of his support system, too.

The chef knew Holmes needed to regain weight and strength and catered to his returning appetite.

"Just about anything I asked for, they would give me," said Holmes, "even popcorn or ice cream after hours."

They even made Christmas Day 2012 special. "My family cooked a meal, and Epworth gave us a private room where my family could bring in the meal," said Holmes.

Thanks to the therapy and support, he was able to return home less than three months later.

Holmes is back on his feet, using a cane to walk, running errands, cooking, and driving his car. It is a happy new year for this former public servant.

(Epworth Villa is among entities that collaborate with the Coalition of Advocates for Responsible Eldercare Oklahoma, which provided this story.)