The worst Ebola outbreak in history — along with The United Methodist Church’s mobilization to ease suffering and fight the spread of the deadly virus — was the biggest story of 2014, according to a United Methodist News Service poll.

Here are snapshots of denomination news that seized the poll’s top five spots.

The first case of Ebola was reported in May in Guinea and, by June, Sierra Leone had 24 cases.

Among those who died are some United Methodists, including health care workers. More than 18,000 people had been infected, according to the World Health Organization.

The Church mobilized quickly. United Methodists have used various forms of communication — text messages, radio broadcasts, drama, and song — to relay facts about Ebola. They have carried prevention information and supplies for sanitization to remote villages. They have left food and supplies at the homes of infected families.

The Church’s Judicial Council in October allowed Frank Schaefer to remain a UM clergyman. That decision was the last in a series of rulings that began when a complaint was filed against the Pennsylvania pastor for performing a same-sex wedding for his son in 2007.

Schaefer was a guest speaker at an Oklahoma City program in late May.

Some people hailed the Judicial Council decision as a step toward full inclusion of LGBT (lesbian, gay, bisexual, and transgender) individuals within the denomination. Others said the ruling implied pastors could ignore church law as spelled out in The Book of Discipline. Everyone agreed on one thing: the debate isn’t over.

The denomination’s debate over human sexuality intensified as more U.S. states and more nations legalized same-sex civil marriage. Unlike the Rev. Schaefer case, some complaints were settled without Church trials.

A complaint filed against 36 UM pastors who officiated at the 2013 same-sex union of two men was resolved in October.

The Church is close to the goal of raising $75 million by the end of 2015 for Imagine No Malaria. The global church has raised an estimated $64.5 million in gifts and pledges for the campaign to eliminate death and suffering from malaria in Africa. Forty-two annual and central conferences have participated.

A group of United Methodists who champion the Church’s current stance on homosexuality issued a statement declaring that bishops must enforce and publicly support Church law restrictions against same-sex marriage if the denomination is to hold together. More than 8,400 United Methodists publicly had endorsed the statement as of Nov. 4.

Additionally, clergy and laity in the North Georgia Conference, with the largest membership of any U.S. conference, signed a covenant calling for unity. Similar statements were crafted in other conferences, including Holston, Louisiana, Mississippi, and Rio Grande.

Bishops at their November meeting in Oklahoma City issued a statement saying their "hearts break because of the divisions that exist within the Church." The Council of Bishops, whose members are not all in agreement about sexuality issues, committed to be "in ministry for and with all people."

Two other subjects gained much attention from United Methodists in 2014:

• the General Board of Global Ministries’ planned move to Atlanta, Ga. 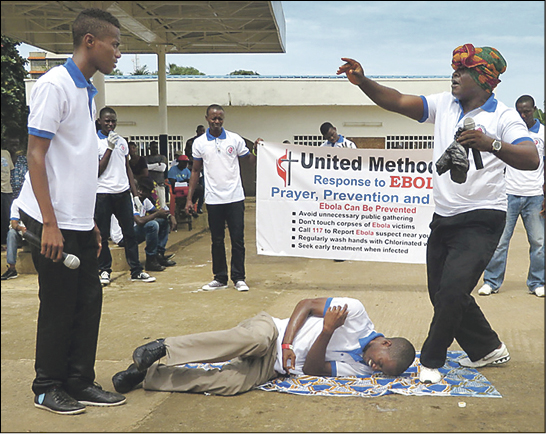 UM young adults in the Sierra Leone Annual Conference perform re-enactments to teach Ebola prevention and treatment in an area where people can’t read or do not have access to radio.