Year in review -- In 2014, God directed Oklahomans in ‘All Things New’

All things new. Three short words sum up much of Oklahoma United Methodist church life in 2014 — in addition to being the Annual
Conference theme that year.

Make note of the new in this news digest, gleaned from the 17 issues of Contact in 2014. And consider what 2015 will reveal, because Revelation 21:5 tells us that God is making all things new. As we reflect, we also reaffirm our resolve to continue our mission to transform the world for Christ.

Some Oklahoma clergy earned a healthy reward. Their medical insurance premiums were reduced by as much as $60 per month throughout 2014. Clergy received discounts if they met health criteria on such things as blood pressure, cholesterol level, and body mass index.

The Oklahoma United Methodist Foundation announced its partnership with the Oklahoma City Thunder basketball team for "OKC Thunder Nothing But Nets Night." A portion of ticket sales for an April game was to be donated toward the purchase of mosquito nets to protect families in developing countries of Africa from contracting malaria.

An official group from the Association of Theological Schools (ATS) recommended that Saint Paul School of Theology at Oklahoma City University be authorized to offer all courses for each of its degree programs. A seminary student had been required to complete one-third of his or her courses on Saint Paul’s campus in greater Kansas City, Mo. (The ATS Board of Commissioners approved the recommendation at a later meeting.)

New Covenant UMC in Edmond progressed with construction of its two-story "NC Kids" ministry center, featuring an indoor treehouse, two-story circular slide, and a stage. Also planned were an enlarged gym/fellowship hall with basketball courts and space to seat 500. Projected cost for the children’s building was $5.5 million.

Responding to the needs of allergy-sufferers in its congregation, Elk City UMC was offering rice-based wafers for Communion as an alternative to bread made using wheat. A community support group for parents of children with food allergies also was meeting at the church.

Delegates to the Annual Conference were studying a proposal to reduce the number of districts from 12 to eight, effective June 1, 2015. A draft document acknowledged, "Due to changes in demographics and membership losses, it seems time to make a change in our structure."

A life-size bronze representation of Jesus sitting on a park bench created a special place to pray at Camp Egan. The statue was a gift from Tom and Barbara Naugle of Tulsa and artist Stephen LeBlanc. It was dedicated March 8 at the camp near Tahlequah.

One menu stood out at a springtime food-truck festival in Tulsa. While other vendors sold tacos, hot dogs, and meatball sandwiches, Pastor Nathan Mattox of University UMC served Holy Communion from the church’s van to festival-goers. He was inspired by John Wesley’s vow in 1739 to take the good news of salvation to the streets.

A proposal being considered by Annual Conference delegates would change the health insurance process for Oklahoma’s retired clergy. Retiree coverage would move from the Conference-sponsored Medicare supplement plan to a plan chosen by the individual retiree according to what best suited his or her health needs. The proposal was expected to generate savings of more than $1 million in Apportionment funding and to cut personal insurance costs for the majority of retirees.

The 2015 Conference budget proposal being considered by delegates included $1 million in new funding to reach new people in new places, as well as an Apportionment reduction of nearly 8 percent. It was the result of collaborative work by several committees to realign Conference finances for the Church’s mission of making disciples for Jesus Christ.

Shelli and John Pleasant were the first residents in Anchorhold, a micro-community planted by Tulsa-First UMC. The Pleasants represent a modern form of monastic community in a transitional neighborhood. Seeking to connect with their neighbors, they follow a rhythm of disciplined prayer, Bible study, shared meals, and volunteer service.

A year after devastating tornadoes in the center of the state, the Oklahoma Conference and Oklahoma Indian Missionary Conference (OIMC) continued working together in recovery efforts. Their joint Disaster Response committee reported receiving more than $1.2 million in direct donations since the deadly storms in late May 2013. Oklahoma United Methodists also are part of the Oklahoma Disaster Recovery Project, an unusual collaboration by five major nonprofits, which also includes the American Red Cross, Catholic Charities, the Salvation Army, and the Society of St. Vincent de Paul.

Phil Hodson had been introduced to
Annual Conference delegates as the new Lawton District church planter.

One of the Conference’s newest churches, Moore-CrossTimbers UMC at 3004 S. Sunnylane, received its charter June 1. Moore-First UMC served as its mother church, supporting the new congregation in many ways. CrossTimbers held its first worship service in 2009, in a Moore elementary school. The church is now housed in rented retail space.

Delegates to the Annual Conference took home an incentive to design innovative ministries that will connect new people to Christ. The Conference is delegating $700,000 to fund such ministries in 2015 through New People, New Places grant awards.

Four United Methodist churches in greater Oklahoma City had joined forces to help restore three homes for senior citizens. About 150 volunteers from Chapel Hill, St. Andrew’s, Quayle, and Edmond-Summit combined their efforts during an annual day of service directed by Rebuilding Together OKC.

The deadline to apply for New People, New Places grants was set as Sept. 15. Any church and any Conference entity may apply for a grant to launch an innovative project to reach new people for Christ.

The congregation of Edmond-Acts 2 Church cut a ribbon July 27 to celebrate the new sanctuary building that seats 500, more than double the size of the previous sanctuary. The $3.2 million project also doubled the church’s parking and educational space.

Weleetka UMC officially closed June 2, and the building and parsonage were transferred to the OIMC.

Tulsa-Asbury UMC had invested more than $1 million to install an innovative multimedia system called Environmental Projection (EP). The system visually transforms the surroundings and architecture of a space from a blank palette to a piece of digital artwork. The system also allows Asbury to live stream worship to an unlimited Internet audience.

New Deaconess Jerrie Lindsey of
Holdenville said God led her, through two friends, to become a Court-Appointed Special
Advocate (CASA) for children. She and other volunteer advocates are appointed by a judge to represent the best interest of children who have been removed from their homes due to abuse or neglect. Their role is to advocate for the children as they move through legal and social service systems.

Boundaries had been drawn out for the eight new districts of the Oklahoma Conference. Delegates to the 2014 Annual Conference had approved the realignment from 12 districts for missional reasons. The district names and locations of district offices, plus other decisions, were being processed.

H. Sharon Howell, the new president of Saint Paul School of Theology, awarded master’s degrees to eight students on Aug. 22 in OCU’s Smith Chapel. The commencement ritual honored the fourth and largest group to graduate from the seminary’s Oklahoma City program. In additional Saint Paul’s news, Elaine Robinson had been named as the interim vice president of academic affairs and dean for both the Oklahoma City and Greater Kansas City campuses.

The international United Methodist Council of Bishops was preparing for its first meeting in Oklahoma since 1978. The session was to feature an Act of Repentance to continue the bishops’ participation in healing the Church’s relationship with Native Americans.

Helicopter rides were among the activities at an outdoor back-to-school event at OKC-Church of the Servant. More than 1,000 people came out for the celebration, which also featured food trucks, pony rides, a petting zoo, and inflatables. "Our church family understood the power of inviting people to experience our church in a new and family-friendly manner," coordinator Scott Bartlow said.

Stillwater-First UMC had celebrated its official recognition as a United Methodist Historic Site. The church was established on Oct. 6, 1889. A plaque at the church, featuring a circuit-riding preacher, designates the church as Site No. 489.

Native Americans called on the bishops of The United Methodist Church to act to heal injustices caused by the Church and develop genuine relationships with the First People. During the global Council of Bishops Meeting on Nov. 2-7 in the state capital, Native Americans described the harm they have suffered and continue to bear.

United Methodist missionary Helen Roberts-Evans met with Bishop Robert Hayes in Oklahoma City to update him on her work in the African country of Liberia. She advised the bishop that major cultural changes are needed in Liberia in order to stem the disease of Ebola.

Skyline Urban Ministry celebrated the grand opening of its expanded food pantry at 500 S.E. 15. The $933,633 project, a collaboration with Oklahoma City’s Regional Food Bank, added 6,391 square feet to the Skyline facility, bringing it to a total of 10,959 square feet. Skyline offers multiple forms of aid to marginalized people.

A rapid response by supporters had doubled a $69,000 challenge grant for the United Methodist Circle of Care to recruit and train foster parents in four more areas of Oklahoma. Recruiters had begun work in Shawnee and Stillwater, and plans were being finalized in Ardmore and Weatherford. 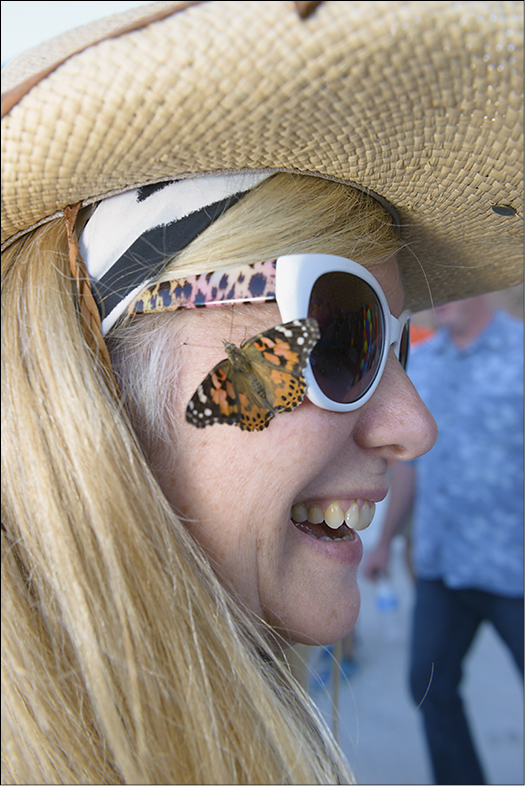 Among churches that completed building projects in 2014 was

New Covenant UMC. The Edmond church combined the grand opening of its NC Kids center on Oct. 26 with trunk-‘n’-treat fun and a scavenger-hunt tour of the space. A butterfly release embodied the campus’ transformation. Associate Pastor Jay Smith said later, "There was such a collection of unique people there to celebrate the fact that we are pursuing the heart of children for Christ."

Children’s Day Out continues, and a recent Advent crafts workshop spread throughout the second-floor space, which includes a stage. On Sunday mornings, worshippers are preferring the church’s new north entry, drawn by a café where they can enjoy breakfast.

Rev. Smith summarized Bishop Hayes’ message at the grand opening: "We’re planting trees that we will never sit under, for people we will never see … but we know that God will work in it." Ten people were baptized Dec. 28, according to a Facebook post. 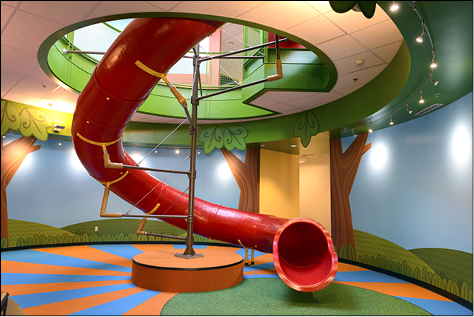 A two-story slide beckons inside the children’s center, 24,000 square feet, completed in 2014 at Edmond- New Covenant. A roof transom infuses the play space with natural light. Top photo, a butterfly lingers with a guest at the building’s grand opening. 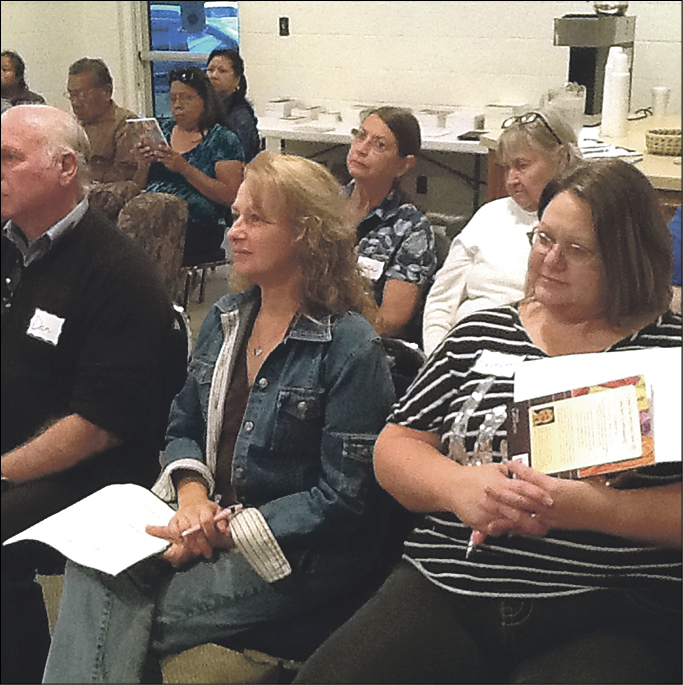 PRAYER WORKSHOPS — Pauls Valley UMC hosts a crowd for a spiritual seminar, "Living the Lord’s Prayer," by Trevor Hudson of South Africa. Each of the six regional workshops drew 45 to 75 people on October evenings, reported Diana Northcutt, Conference director of Discipleship for Small Membership Churches. "He just opened up the Lord’s Prayer in ways that people never thought of," she said of Rev. Hudson’s teaching. 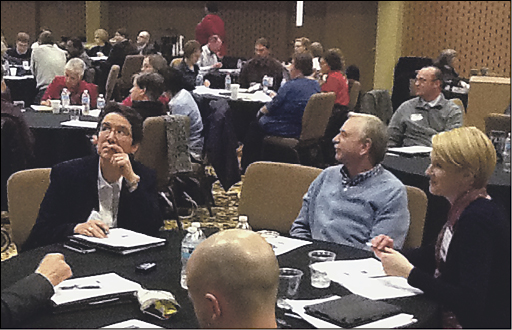 INFORMATION HUB — Oklahoma welcomed superintendents and staff from other annual conferences to a Route 122 network event in early December. A total of 113 participants, from as far as Oregon and Pennsylvania, gathered at OKC-St. Luke’s. They shared their best practices to help revitalize existing churches, said Diana Northcutt of Oklahoma, a Route 122 design team member. She listed eight keys to successful change for a church: a focus on the transforming grace of Jesus Christ, apostolic leadership by laity and clergy, Conference support to engage people in the mission field, continuous lay and clergy learning and collaboration, independent assessment of the congregation, ongoing coaching, and openness to the Holy Spirit’s leading. Eleven of Oklahoma’s 12 district superintendents attended, Rev. Northcutt said. Among other Oklahoma leaders were Charla Gwartney, Craig Stinson, and Rebekah Hasty (pictured).