During his 20s, Phil Hodson launched five businesses. That gained him great experience for his newest venture.

He’s planting a church in Lawton.

This entrepreneur didn’t plan to redirect his skills into career ministry. At age 28, he sold his fifth company and looked forward to golfing for pleasure.

Then "I woke up one day with nothing to do, and there was God, waiting," he said recently.

Newlyweds Phil and Joelle Hodson moved from Indiana to Dallas. In Fall 2010, he began study at Perkins seminary, Southern Methodist University. A fashion designer, she was able to transfer within her company.

On Dec. 5 in Lawton, some 70 people attended a candlelight service, a preview worship event for Community United Methodist Church. A second service is set for Jan. 24.

As he nurtures this new community, Hodson holds dear his family’s long-time faith. He is a fifth-generation United Methodist. He was baptized and grew up in the Indiana church where his parents were married and his paternal grandfather was pastor.

He first felt God calling him at about age 16, Hodson admitted. As he prayed in his home church, "It was that voice. It was surreal, that feeling. I just knew."

Hodson sought advice, but even his grandpa told the teen to study "accounting or business, something practical," he recalled. "I took them at their word."

They said, "If God wants you, God will find you."

So he majored in selling and sales management. The sense of God’s call "just slipped away" — until that morning in his late 20s.

"It was like that feeling in the sanctuary." Hodson remembered thinking, "God has been really good to me. I’ve learned how to build a business, to manage people, to manage money."

He saw the dwindling membership in his home church as a microcosm of the denomination’s status. Perhaps his skills could be used to change that.

"And there was God."

After only six weeks of study at Perkins, Hodson wanted to work concurrently in the mission field. He saw a church job posting and met Guy Ames III, who was then Ardmore District superintendent. A week later, he received an appointment to Calera UMC.

The Hodsons had never crossed the Red River into Oklahoma.

"One month later, we were in a pulpit," he said. He’s also pastored the Hugo churches.

In Lawton, Hodson represents all UM churches as he knocks on doors and posts Facebook videos.

"Absolutely," said the church planter. "All churches benefit when a new church comes into a community and succeeds. We don’t start churches for existing (churchgoers). That’s sort of like shuffling chairs. That doesn’t accomplish anything.

"Kingdom work should be a win-win."

Rev. Tiger has been active in the Conference’s Department of Congregational Development for about 10 years. His commitment to that work is strong; he’s familiar with the Church’s research.

"One of the things we need to do as a denomination: We need to start new churches; they reach new people," the superintendent said.

A church plant is a key component of the District’s Strategic Plan.

Lawton seems underserved by The UMC, Tiger said. Statistics show 700-800 people attend UM churches there on Sundays, "but that’s less than 1 percent in a population of 100,000-plus," he said.

Tiger encouraged the district’s church planter to connect with anyone who has started a church, to learn from them. Hodson had made 11 such visits when he talked with Contact.

He attended church-planting "boot camp" by consultant Jim Griffith, in Dallas, and a leadership institute at Church of the Resurrection, Greater Kansas City, Mo. He’s pored over demographics.

And Hodson prays aloud as he drives around Lawton.

"You will not make a disciple in the office, ever. Jesus didn’t sit in the synagogue all day; he was out walking the streets," Hodson said.

Mom hosts a weekly gathering of 12-20 young mothers, with their children, at the parsonage.

That event gave Rev. Hodson affirmation of God’s presence in the Lawton ministry.

Working from home, he heard snippets of their talk about God "week after week." When one mother spoke of having her baby baptized, much conversation was sparked.

Hodson couldn’t resist. The pastor got a fresh cup of coffee and asked to join the group, "to offer a Methodist perspective."

"It was amazing to get to be a part of that group of people, so excited," he said. "Baptism is important to the women, and they wanted their babies baptized.

"People want to deal with the hard questions. They want someone who will take the time; they want a safe place to do that.

"God was in that moment."

He concluded, "If we want to share the good news today, we’ve got to speak it in a way that they’ll hear. What if we can create a space where people can wrestle with hard questions, with God? There’s a need."

Hodson is asking Oklahoma United Methodists to take a specific action to support the church plant. "Like" and "share" the Facebook page Community United Methodist Church.

"You never know who you might know who knows someone in Lawton. This is Kingdom work. Let’s go viral!" 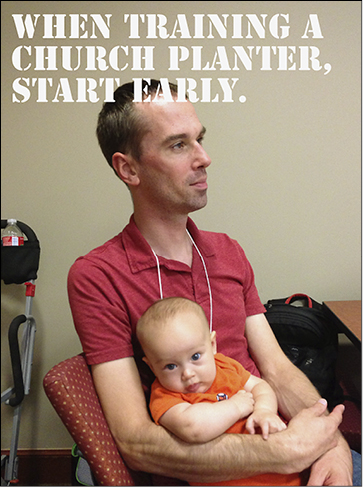 After Phil Hodson’s son attended a seminar with him, this photo meme was posted on Facebook.

Joelle and Phil Hodson play with sons Xander and Xane.