This honor was presented at OCU’s annual Alumni Awards Dinner, held Nov. 7 in the student center, as part of Homecoming weekend festivities.

Since 2009, Rev. Lovelace has led Skyline Urban Ministry, which assists people in need in Oklahoma City. She is executive director.

Lovelace earned her bachelor’s degree in religion from OCU in 2002 and the Master of Divinity at Perkins Theological Seminary in 2007. She was ordained as an elder in 2010.

A licensed practical nurse, she has been a counselor at an alcohol and drug treatment center.

Lovelace also was a 10-10-10 missionary assigned by the UM General Board of Global Ministries. She served in the prison ministries of both OKC-Penn Avenue and Ardmore Redemption United Methodist Churches. Her responsibilities were pastoral care of the inmate congregations, teaching relapse prevention/re-entry classes, and preaching.

Lovelace has been involved in prison ministry since 1996. She said the spiritual development and renewed relationship with Christ she received through Penn Avenue Redemption Church was the foundation for furthering her education and hearing the call to ministry.

Others describe her as one who confirms that "jailhouse religion is real" and "there are no throw-away people."

Sharon Betsworth, director of the Wimberly School of Religion, praised Lovelace. "The School of Religion is pleased to honor Rev. Claudia Lovelace. She truly embodies the servant leadership we seek to instill in our students at Oklahoma City University. While many of us talk about the poor, humbling ourselves, and serving the least of these, Claudia lives this out as an everyday reality."

Lovelace is a member of Phi Etta Sigma, Alpha Sigma Lambda, and Theta Alpha Kappa honor societies. She was elected to Who’s Who Among Students in American Universities & Colleges.

She was one of seven alumni honored by the schools within the university system. Also recognized were:

• Auda Marie Thomas is nationally certified in piano, theory, and music education. Thomas is in her 33rd year as organist and choir director at St. Teresa of Avila Catholic Church in Harrah. She runs a piano studio and is dedicated to the promotion of arts in education.

• Ruth Charnay is the department director for communications and the arts at Oklahoma City Community College in the Arts and Humanities Division. 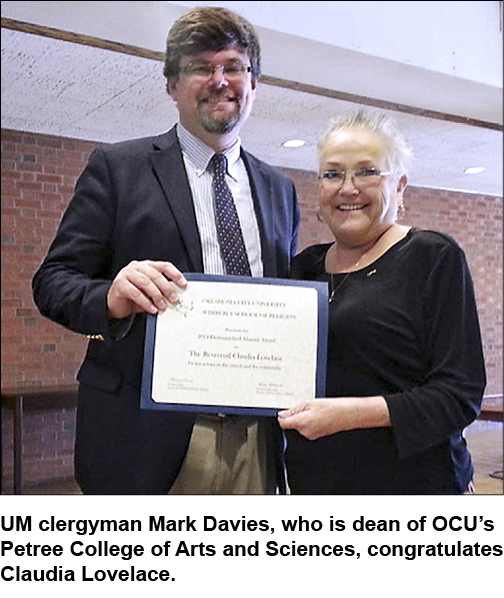