On Sept. 21, the containers with M&M’S© candy were distributed to everyone at the church. Once emptied, each can hold about $14 in quarters.

Worshippers were asked to take the tubes home, enjoy the tasty contents, and return tubes filled with coins within two weeks.

The money donations then were used toward the goal of purchasing and packing 50,000 meals on Nov. 2 for Stop Hunger Now. Each meal costs 29 cents, according to the hunger-relief agency.

The aid agency began its hands-on program in 2005 to assemble nutritious dehydrated meals and distribute them globally. The food’s shelf life is two years.

On Nov. 2, which was Thanks-Sharing Sunday at Tulsa-First, the congregation worked in two shifts to meet the goal.

More than 800 people, ages 7 to 87, volunteered on the meal assembly line inside Thomas Hall. First- through third-graders served alongside their parents.

"It is likely that some refugees in real need will receive this food," wrote Senior Pastor Wade Paschal in FirstWord, the church newsletter.

"These people will never know that First United Methodist in Tulsa prepared their food — but God will know. And we will know that we have been faithful to God’s call to care for the ‘poorest of these, my brethren.’"

Other Oklahoma churches also have volunteered with Stop Hunger Now, and the 2012 South Central Jurisdictional Conference delegates took on the project during that meeting in Oklahoma City. 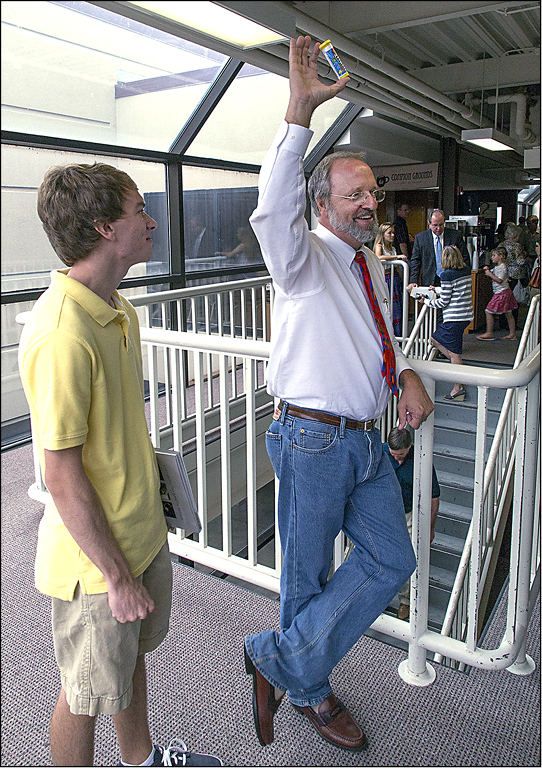 Miles and Richard Bewley remind worshippers on Sept. 21 at Tulsa-First UMC to take home a tube of candy.