One Oklahoma City church’s approach to Kingdom work may be unique among models for ministry. The senior pastor is not the pulpit preacher at Chapel Hill UMC.

That is an anomaly for large churches.

Yet this radical strategy is growing both OKC-Chapel Hill and a young pastor’s leadership skills.

And from January through July, the church welcomed more new members than during all of 2013. There have been more professions of faith and baptisms. More younger families come to church. A Sunday School class has launched for young adults.

Chapel Hill’s people have been "amazingly engaging" with the change, Rev. Rose said. Longtime members have told him, "I can’t believe what is taking place in our midst."

"We recognized pastors as a whole in the Oklahoma Conference are getting older. Some real talented pastors are approaching retirement age," said Cary Dooley, who chairs Chapel Hill’s Staff-Parish Relations Committee.

One-fourth of Oklahoma’s active clergy are eligible to retire in five years, one-half within 10 years, according to data from the denomination’s General Board of Pension Benefits. A former district superintendent, Rev. Rose identified a need for new clergy to gain experience quickly.

"One way to help is by training young, talented pastors in churches where there are more experienced pastors to mentor them," Dooley explained. "We’re going to need them sooner. Churches can make a difference for the Kingdom by training. Chapel Hill can do that."

Based on worship attendance, Chapel Hill is the 13th largest church in the Conference. The weekly average is 596 worshippers, and total membership is 2,526 people, according to the 2014 Conference Journal.

Among the staff are four appointed clergy; Nancy McCullough and Stephen Hale also are associate pastors.

Rev. Tate rises about 3 a.m. on Sundays to finish his sermon preparation. He preaches without notes. He previously pastored a three-point charge, but has eight years’ experience as a church business administrator/associate pastor – at Edmond-Acts 2, Midwest City-Wickline, and Chapel Hill.

He had to regain the rhythm of weekly preaching.

That first Sunday in January, he thought, "This needs to go well," as he stepped into the pulpit.

Since then, he’s baptized "a lot of kids and some adults, which is always exciting." He first baptized an infant and loved the interaction with the baby. Kris and Kinsie Tate have two children.

He baptized one adult by immersion; a water trough for large animals was used, set up in the church’s memorial garden.

Ordained as a deacon in 2010, Tate is transitioning as a Local Pastor toward ordination as an elder.

He first sensed God calling him "to help facilitate positive change" but "I didn’t know what that looked like." Political and law school pursuits fizzled.

As an adult volunteer at a summer church camp, he chose seminary. He focused on what he had always excelled in: administration.

But the deacon’s vision for church life persistently bubbled over into other areas.

"God really had called me to the ministry of an elder," Tate admitted. "It’s my responsibility to proclaim the good news for the sake of the people."

Both Rose and District Superintendent Dan Pulver affirmed his decision. They had recognized elder’s gifts in Tate.

"I believe when we’re open, God can and does work through that," Tate said.

"One of the things I love about Chapel Hill is that we are a theologically diverse congregation. We focus on what unites us."

Tate emphasized his experience as churches’ associate pastor. "I know what it is to be a role player. You’re always learning something, if you’re open, to make you better. We understand we are about the mission of making disciples for the transformation of the world."

The new format at Chapel Hill deploys all four appointed clergy according to gifts rather than titles.

Rose explained, "God and I have lots of dialogue. I said, ‘OK, God, you put these people here. I believe it’s for a reason, so what do you want to do with us?’

"I believe that God wants to direct us. We have to get ourselves out of the way so God can."

And that’s what Rose did, with approval of the Staff-Parish Relations Committee and the Cabinet.

Dooley said, "Robert’s a real servant leader, willing to relinquish the pulpit for a time. I think it’s been the right thing to do."

"The church is bigger than the pastor," Rose said. "I’m being realistic. I just want the church to grow, to be faithful, to reach more people.

"As long as the four people appointed by the Cabinet are here, this is the best utilization of their gifts."

"They are trying this to see what the Spirit does with it. We’re watching it unfold. We are in this for the mission of the church." 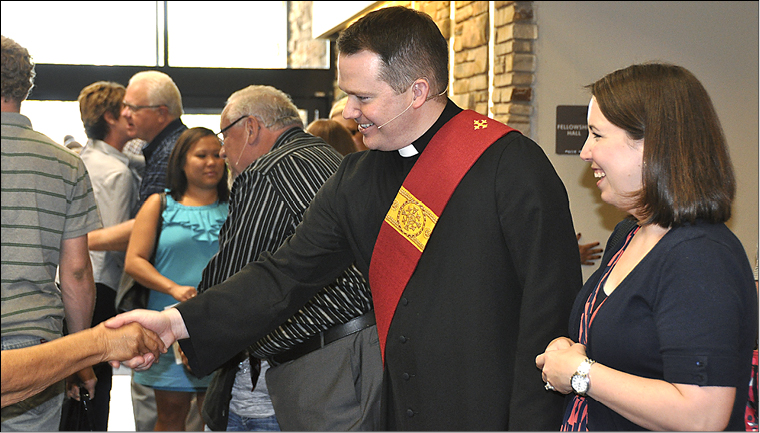