This comical male trio was charged with engaging the attendees in the 1928 song "Methodist Pie." Although the songwriter is unknown, "Methodist Pie" has been recorded by artists including Red Foley, Gene Autry, and Grandpa Jones.

A long-standing Pawhuska favorite, this lively song tells of a camp meeting, good grub, and a "great big Methodist pie."

Clips of church activities spanning 30 years were shown. One comment overheard: "It doesn’t pay to miss a Methodist family night dinner, ‘cause too much fun goes on without you!"

Commemorating the anniversary, Pawhuska-First purchased 125 Bibles for the Gideon Society, collected 1,250 diapers for the Department of Human Services, and donated 375 cans of vegetables to Christ’s Cupboard. In addition, $125 was donated for seminary scholarships in Chile.

History shows this was the first Protestant church in Pawhuska. According to reports, the first assigned pastor was gone before anyone met him. The second absconded when confronted with unpaid hotel bills.

When Mrs. F.T. Gaddis, through the Women’s Home Mission Society, arrived in town and opened a school, she became the church’s first appointed pastor. 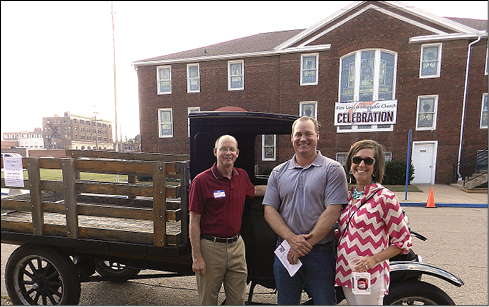 Richard Morris stands with Taylor and Laura Reed in front of a 1923 Model T Ford Truck. In background is historic Pawhuska-First UMC.