On Nov. 6 in Oklahoma City, Native Americans called the bishops of The United Methodist Church to work purposefully to heal injustices caused by the Church and develop genuine relationships with the First People.

"I want you to go tell your people … all is not well," liturgists declared during an Act of Repentance, held at OKC-St. Luke’s UMC.

The program was part of the global Council of Bishops Meeting, Nov. 2-7 in the state capital.

Three Native women described how their families have suffered as a group marginalized by governments and the Church.

Religion split Tamara Wilson’s great-grandparents, she said. Early Methodist missionaries insisted they would "burn in hell" if they did not abandon their traditional spiritual ceremonies. As a child in a Methodist-affiliated boarding school, Wilson’s grandmother was beaten if she spoke her Native language.

Wilson is a member of rural Concharty United Methodist Church, south of Bixby. The congregation is part of the Oklahoma Indian Missionary Conference (OIMC).

Missionaries threw water in the face of Denisha Wilson’s grandfather when assigning him a Christian name – George. Also taken from his family to a boarding school, he was called a savage and worse.

The women talked of current efforts to reclaim their heritage. Deb Echo-Hawk is the Pawnee Nation’s Keeper of the Seed. She remembered Nora, more than 100 years old, praying over three kinds of Pawnee heirloom corn.

Through the storytelling, liturgy, and music, the Native representatives sought to educate the bishops, members of the UM Connectional Table, and others in attendance about trauma both past and ongoing for all indigenous people.

Bishop Robert Hayes Jr. of the Oklahoma Area said, "My fervent prayer is that as we leave we will have learned how to do more to live together and honor one another."

He also presented OIMC Superintendent David Wilson with a money gift on behalf of the Council and Connectional Table.

During the week, bishops’ spouses and guests explored the Native art collection at the Oklahoma Supreme Court building and related educational displays at the Oklahoma History Center.

The 2012 General Conference affirmed an initiative for healing and reconciling the Church with indigenous people. A resolution assigned the directive to the Council.

In Fall 2013, bishops traveled to Cherokee, N.C., one tribe’s homeland before forcible removal by the U.S. government in the 1800s.

That location thus marks the beginning of one Trail of Tears for Native people. And so in Oklahoma, the Council met at the end of the trail.

Clergyman Chebon Kernell, a member of the Seminole Nation of Oklahoma, had a key leadership role in this month’s program. He is executive secretary of Native American and Indigenous Ministries for the UM General Board of Global Ministries.

"The narrative you heard today reflects what is happening to indigenous people of the world," he said. "It’s uncomfortable work, but necessary because our United Methodist Church is sick."

He challenged, "It’s well past the time of making more resolutions. What will you do?"

On the following day Bishop Sally Dyck spoke in the Council’s final plenary. "I was quite moved," she said. "They poured out their pain in a really honest way."

The Justice and Reconciliation leadership team of the Council reported working to encourage Acts of Repentance in all annual conferences and to update the foundational document "God’s Renewed Creation: Call to Hope and Action."

More news from the Council of Bishops meeting: www.umc.org/news-and-media/united-methodist-news. 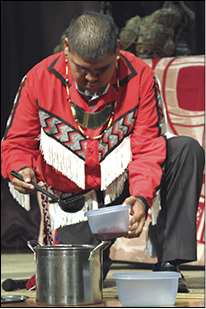 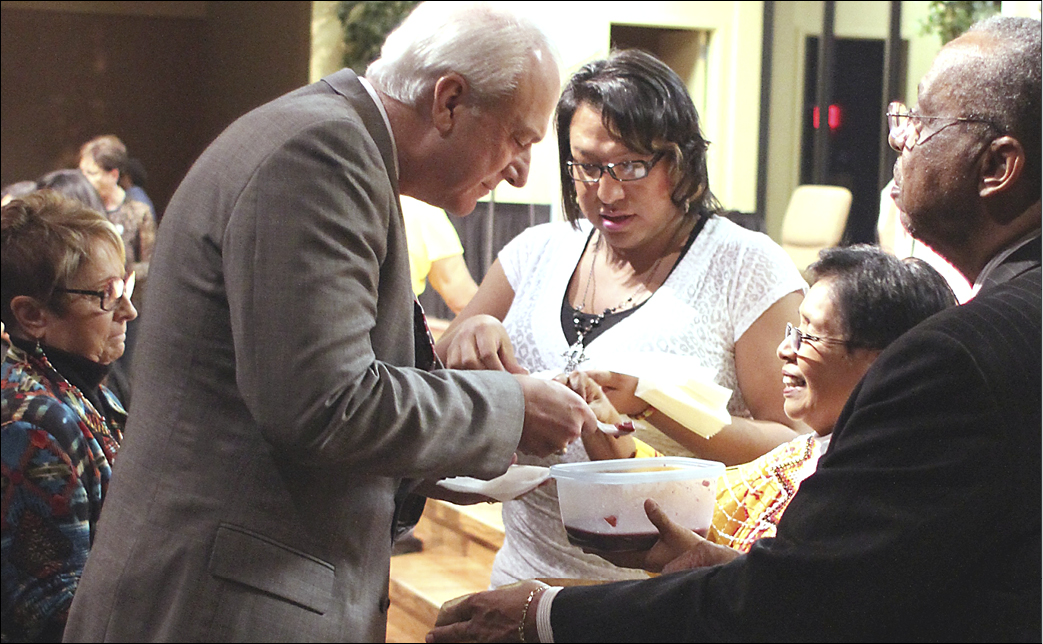 Bishop Thomas Bickerton of Pittsburg receives Communion during the Council of Bishops Act of Repentance on Nov. 6 at OKC-St. Luke’s. The elements used were a Native American dish, grape dumplings.