Oklahomans said their experience was eye-opening when they attended the Global Young People’s Convocation and Legislative Assembly in the Philippines in July.

Enduring a typhoon was not the sole reason for that description, although the storm did force a change of venue.

The seven-member delegation counted among 300 youths and adult leaders from 34 countries. They worshipped together, adopted five petitions to the 2016 General Conference as well as a call for unity, and assembled 600 packets of locally produced food for distribution in that nation by UMCOR (United Methodist Committee on Relief).

Katie Shewey of Enid wrote, "It was the most proud and the most disappointed I have ever been to be a United Methodist."

She explained, "I loved coming together with other Methodists from around the world and worshipping God together, no matter what language we spoke.

"I also liked our statement of unity, stating that, no matter what happens with legislation, the Church will stay united.

"I was incredibly disappointed, however, when it came to legislation. I thought that holy conferencing would look like gentle words and calm tempers. Instead it looked like rage, hateful words, and arguing to make a point.

"That should never be the case. No matter how big our differences in beliefs are, we should never act like that," Shewey said.

The UMCOR project reminded her of the Church’s purpose "to love and help the people who need it most."

Morgan Ross of Oklahoma City said the event "was an amazing time of growth in my own beliefs. It made me question and really re-evaluate everything I believe and why."

One of the most meaningful moments for her was attending worship at a church in Manila.

"The hospitality shown to us was amazing, and I loved getting to teach the children and youth songs that we sing in America and also assisting new friends from Africa in teaching the children an African song/dance," Ross wrote.

For the first time, Jay Williams of Wewoka traveled beyond the United States.

"GYPLCA changed my life in many ways!" he declared. "I really had a great time learning and being involved with all the voting rules and procedures.

"Although typhoon Glenda threw everything off schedule, it was fun improvising and managing with what we could. It was an experience that you wouldn’t want to miss, especially a person going into ministry."

Adult sponsor Matt Franks said the event "showed me the complexities of a worldwide United Methodist connection." He is pastor at Locust Grove UMC.

"I had a great conversation with people from the German delegation … about how some of the issues they deal with … differ from those that we deal with in the United States."

Also attending from the Oklahoma Conference were Kirsten Schiska of Fairview, Miranda Luster of Stillwater, and Drew Walker of Calumet. 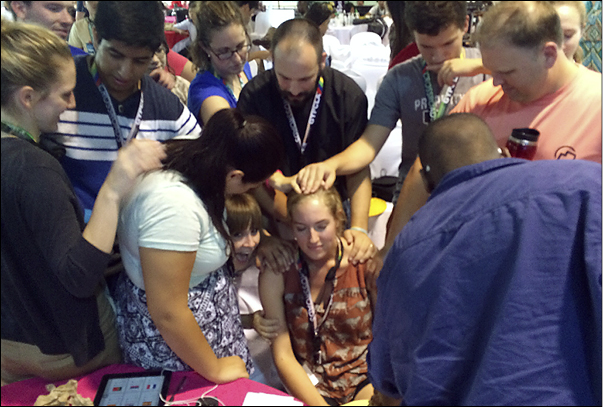 In the Philippines, delegates from the South Central Jurisdiction in the U.S. pray for Miranda Luster of Stillwater.