"We come in expecting a celebration, a day of worship, but it always turns into a funeral," said Emmanuel Shanka Morris, pastor of Spencer Memorial UMC, Charlotte, N.C.

Rev. Morris is Liberian, as is the associate pastor there. So are nearly nine out of 10 members of his church; another 10 percent are from Sierra Leone.

Since the Ebola outbreak began, every Sunday at least one member reports the death of another relative in the two West African countries hit hardest by the deadly virus.

The congregation prayed and fasted every Wednesday this month. Using 2 Chronicles 7:11-22 and Ezra 8:23 as guiding scriptures, the church interceded for the people of Liberia, Sierra Leone, and Guinea.

Across the United States, UM churches with native Liberians and Sierra Leoneans tell similar stories of grief and suffering, while trying to rally support for medical relief.

Albert Travell, a member of First UMC, Arlington, Texas, said seven of his family members in Liberia died in July. Now the remaining family is having trouble getting food.

"I am trying to send them some money so they can buy food. I am praying by the grace of God, everything will be all right soon," Travell said.

Liberians living in the U.S. are stepping up contributions to family and friends in their homeland because many people there are unable to work and are not getting paid, said Richard Stryker of the North Alabama Conference and a native of Liberia.

His wife lost a high school classmate to Ebola. Four out of eight people in that classmate’s family also died, after waiting days for an ambulance to arrive to take them to the hospital.

"Sanitation, communication, lack of facilities remain major problems for the prevention of this disease," he said. "I believe people from the West that are going to help assume a certain level of basic care. That is nonexistent."

Melvin Morgan of Dallas, a Heart of Africa Fellowship member, recently lost his sister and two nieces to Ebola in Liberia.

"As a human, I weep, because Jesus himself wept," Morgan said. "But as a Christian, I also put on my faith, because the Bible says with God all things are possible." 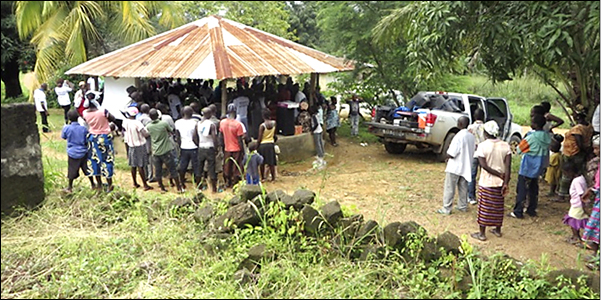 People in Mongere, Sierra Leone, gather at the village hut to hear an educational message about Ebola from The UMC.

The United Methodist Church is sending out hope and life-saving information to Africa twice daily – in 160 characters or less.

FrontlineSMS, a free texting service, doesn’t rely on Internet connection and can send messages to groups. It is being used by the Church, especially to reach pastors and members in remote places.

Mixed with prayers and scriptures are informative messages, such as "Ignore rumors such as ‘Simply saying Ebola’ aloud transmits the disease. That is false!"

By having trusted clergy leaders relay the messages, the Church aims to counter misinformation still swirling about Ebola.