The punch knocked Paul Saltzman off-balance. His knee barely touched down before he was running.

The white supremacists pursuing him were enraged by his voter registration work in Mississippi.

Although injured, he outran those men in 1965. But Saltzman reruns his memories each time his documentary film "The Last White Knight" is shown during his educational seminars about prejudice.

On Oct. 4, he led one of those seminars, sponsored by the Conference’s Commission on Race & Religion (CORR), hosted at Oklahoma City University.

Saltzman, a prolific filmmaker and TV producer, is founder of the nonprofit Moving Beyond Prejudice organization. More than 40,000 young people, youth-at-risk, and community groups have attended his presentations.

These films "evoke feeling and provoke discussion. We want to create safe space to have difficult conversation," Saltzman said.

"God is using his gifts and talents as a film producer to bring these issues," said Rose Marie LeRoy, CORR chairperson and pastor at Stilwell. "It’s important to relate to people of different backgrounds."

When someone doesn’t know you, but they don’t like you, that’s prejudiced, a fourth-grader once told the filmmaker.

Saltzman defines prejudice as "a judgment of another person out of your own shame so that you will feel better."

He has retrained himself to stop and reflect when he recognizes bias in himself. He follows the Golden Rule (Matthew 7:12) and wants to act out of love.

"If we understand how prejudice works – the mechanics of it within our own psyche – then we can actually shift it."

Such change involves overcoming fear as well as behavior patterns, according to research Saltzman has studied. He also learned meditation at an ashram and has undergone training by a center for nonviolence.

"Your decision-making is impaired when you are in fear," he said.

He instructed the seminar participants to put their hands over their hearts and, simply, breathe. One breath can move a person from fear to neutrality, and the next breath can release love, he explained.

Saltzman’s recovery from that violent attack in 1965 took more than two breaths. The young civil rights worker from Canada quickly learned who struck him in the face, but when he sought justice from a Mississippi court, the case was dismissed.

Four decades and many life experiences later, Saltzman called his attacker. The Klansman agreed to meet. Saltzman filmed their meetings, across five years, and "The Last White Knight" is the result.

"What is the reason to move beyond prejudice for you?" he asked his Oklahoma audience. "If your heart is contracted," you miss out on many wonderful life experiences.

He advocated action based on love, not fear. "I think, on the whole, we are progressing. What do you think?" 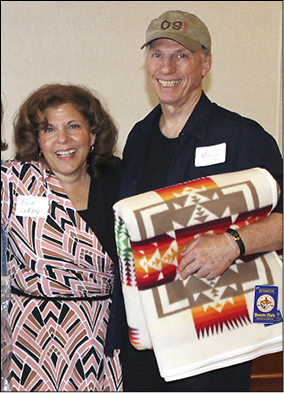 CORR Chairperson Rose Marie LeRoy presents a gift to filmmaker Paul Saltzman.
Making Disciples of Jesus Christ for the Transformation of the World