Through stained-glass windows, sunlight speckled faces as people waited Oct. 6 in the east foyer of Stillwater-First UMC. Heads turned to watch three men uncover a draped frame on the wall.

By happy chance, that site number correlates with the church’s history. On Oct. 6, 1889, First Methodist Episcopal Church was established, birthed from the first of the historic Oklahoma Land Runs.

Not many Oklahoma houses of worship can count 125 years of continuous ministry. Fewer can claim they are ’89er churches.

And Stillwater-First is one of only four United Methodist Historic Sites in the state. This designation is awarded by the denomination’s General Commission on Archives & History.

• To lift up First UMC for its historic ’89er church status and for its 125-year legacy of mission and ministry to the local community and beyond Stillwater.

• To encourage other UM churches organized in the Land Run era to share their stories.

• To help document the collective influence of those early Methodist churches on the founding values and early history of Oklahoma.

Before 1889, the Indian Mission Conference of The Methodist Episcopal Church was already ministering in the territory. But opening the Unassigned Lands to white settlement spurred "explosive growth" for the Methodist movement, according to materials distributed at the recent ceremony.

"The presence and influence of Methodism was so pervasive that it was said where 10 people gathered, one of them was a Methodist preacher," Gill said. The Stillwater church "was in the forefront of this movement."

First Methodist Episcopal Church, so named in 1889, was the first church of any denomination officially organized in Stillwater, according to the research.

To charter, a group of 25 people gathered upstairs in the town’s first large building, at Ninth Avenue and Main Street.

Member Gladeen Allred attended the plaque dedication. She is the fourth generation in her family active at First Church. Her parents married there in 1926.

Jim and Ann Enix agreed the recognition is a milestone for their church. And church historian Will Paine spoke of the challenges for people settling in the territory – even for preachers.

"Some stuck it out, and that’s why we are here today," he said.

Two books by Paine track this story of faith across more than a century. They are "So great a cloud of witnesses" and "How Firm a Foundation."

"This church has … helped ‘spread scriptural holiness’ across the Oklahoma frontier, and … has been continuously recognized … since its founding," states a resolution approved by the Annual Conference this year.

A circuit-riding preacher is depicted on the official plaque now installed at Stillwater-First. 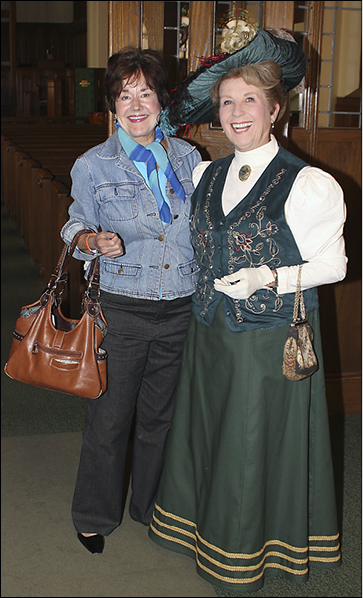 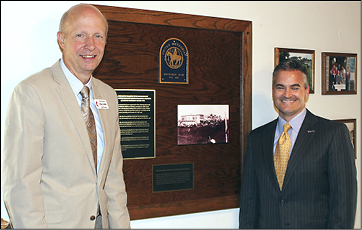