Members of about 25 churches of various denominations in Ardmore, including Ardmore-First UMC, are setting their cellphone alarms to go off at noon as a daily reminder to stop and pray The Lord’s Prayer.

On a recent day, a friend of Jessica Moffat Seay reported hearing at least 20 cellphone alarms go off at a restaurant and observing many diners stop to pray.

The initiative drew praise from Larry Bauman, Ardmore District superintendent. "I believe praying this simple, yet profound and powerful, prayer can be a point of unity for all of us across the far too many divides of denomination and doctrine so evident in Christ’s Body," Rev. Bauman said.

His phone alarm is set for noon, too.

The initiative Pray Down at Noon was founded by Terry Teykl of Houston, Texas, a prayer evangelist and UM clergyman who recently led two seminars for the district. Two weeks later, Seay spoke at a two-night community-wide faith celebration sponsored by the Ardmore ministers’ alliance.

She challenged everyone there to join First UMC in the intentional prayer time.

Residents also get a reminder to pray each noon from a billboard on Interstate 35 at the 12th Street exit.

The project is promoted on a Facebook page, The Lord’s Prayer at Noon Daily, created by First UMC. Within 10 days after it launched, Seay said, 1,600 people saw the page and promised to pray.

"Some people in other time zones have asked how that works. You just pray at noon in your own time zone," she explained.

It is believed that the early Christians regularly spoke The Lord’s Prayer at morning, noon, and night.

"Imagine the Body of Christ praying The Lord’s Prayer all around the world. As it becomes noon in each time zone, our sisters and brothers will be praying for God’s Kingdom to come and God’s will to be done on earth as it is in heaven," Bauman said. 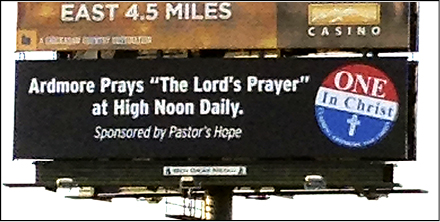