Volunteers from New York move a gate Sept. 5 into the new barn for 1 Day Ranch at Bethel Acres, near Shawnee. The man at center is a team leader for New York Says Thank You.

United Methodists remain engaged in disaster recovery work in Oklahoma after the May 2013 tornadoes. In Bethel Acres on Sept. 4-7, volunteers from the community and across the nation built a new barn for 1 Day Ranch, a nonprofit animal rescue and therapeutic riding facility founded in 2010.

The Oklahoma UM Disaster Response Committee awarded a major grant of $50,000 for the purchase of building materials. Members from both the Oklahoma Indian Missionary Conference (OIMC) and the Oklahoma Conference make up the committee.

The New York Says Thank You Foundation annually commemorates 9/11 by doing recovery work at other disaster sites, in partnership with other groups. The Foundation declares, "What we do is about 9/12."

The hundreds of volunteers included New York firefighters and police officers who were first responders in the World Trade Center attacks, Ground Zero construction workers, and disaster survivors from other states.

Additional major funding for the $200,000 project came from the Jewish Federations of North America and Oklahoma City, the Chickasaw Nation, and Foundation supporters in North Dakota and Texas.

David Wilson, OIMC superintendent, said, "It is amazing to see how Creator God brings so many great people together from around the country for such a great ministry." 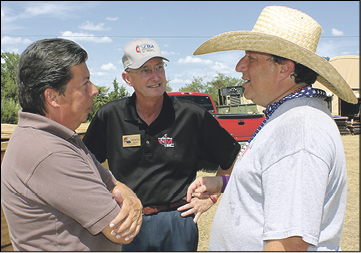