The commencement ritual honored the fourth and largest group to graduate from the seminary’s Oklahoma City program.

The graduates are introduced here.

• Jennifer Ahrens-Sims is chapel coordinator for Saint Paul at OCU. She was Supply Pastor this summer at Mustang UMC. She graduated with honors, specializing in Black Church Studies.

• Arron Grantz continues as pastor of the Morrison and Ripley churches.

• Stephanie Stephens is pastor at Shawnee-St. Mark’s UMC. She earned a specialization in Restorative Justice and Prison Ministry.

• Jeff Mildren is co-pastor at OKC-Mayfair Heights. He specialized in Wesleyan Studies.

• Jeff Ralston is pastoring the Fargo and Gage churches.

• Adam Shahan is associate pastor at Moore-First, leading its modern worship programming. He specialized in Restorative Justice and Prison Ministry.

Four Doctor of Ministry graduates also walked in the ceremony at OCU, although most of their schooling was in Greater Kansas City, Mo., where Saint Paul collaborates with UM Church of the Resurrection.

Their participation highlighted that the Oklahoma City site has been fully accredited to offer all the Saint Paul degree programs.

President H. Sharon Howell also announced the promotion of Elaine Robinson, whose acclaimed leadership has secured success for the Oklahoma City campus in its first six years. Rev. Dr. Robinson was named interim vice president of academic affairs and dean, responsible for the academics on both campuses. She becomes Saint Paul’s first vice president based in Oklahoma City.

Both Howell and Robinson said they individually will spend time on both campuses each month.

The president returned to Saint Paul at OCU on Sept. 2 for the Opening Convocation of this academic year. Enrollment is 45 students. In addition to preaching on "Coloring Outside the Lines," she met with Oklahoma Conference and OCU leaders.

She described this seminary in two locations as a "radical collaboration" that continues to unfold. A new curriculum is being implemented this academic year. And OCU offers lodging and meals, which are not available to students in Kansas City, she noted.

"This is a strong Saint Paul campus. I think what we focus on here is growing and expanding," Howell said.

"Laboring together" is a key phrase for this seminary president, "because collaborations are not easy. They require more of the collaborators, more time, energy, give and take. Everyone has to give up something, but I think the greater good grows out of that." 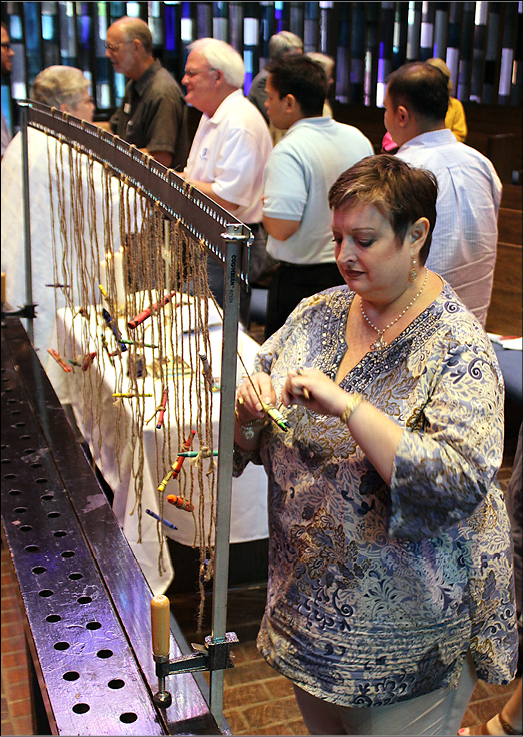 In OCU’s Smith Chapel, Saint Paul student Laura Glover ties crayons to an altar display during the Eucharist ritual in the Opening Convocation on Sept. 2. 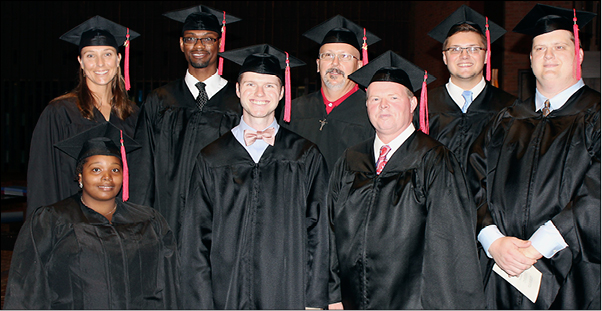