4 generations live out faith at one church 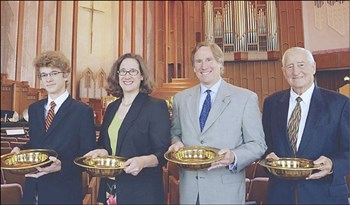 TULSA — As someone who studied sociology, I find that I best understand a place by understanding the people of that place. New to Boston Avenue United Methodist Church, I am coming to know the church through the memories, stories, and experiences that members share with me. Recently I was fortunate enough to speak with Irene Brown and Ed Monnet Jr. and see Boston Avenue through the eyes of a family that has been involved there through four generations.

The Monnet story is a testament to faith, family, and love.

They were among the first babies baptized in the current church building, making them in March 2018 perhaps the longest-tenured living members of Boston Avenue.

Their father, Eugene Monnet, donated funds for the tower elevator in the church. Their uncle, Forrest Darrough, chaired the board of stewards from 1943 until 1951.

Ed Sr. followed in his uncle’s footsteps and became chairman of the administrative board in 1983. But his service to the church ran deeper. He was a long-time member of the finance and budget committee, and he served as head offering bearer at the 11 a.m. service for over 50 years.

Ed Sr. and his wife, Marjorie, served as junior high sponsors, and they were founding sponsors of the Roundtable Sunday School class.

Marjorie has been a leader in Christian education at Boston Avenue and nationally.

Ed’s diverse church activities included his portrayal of Thomas, at the 1967 Religious Arts Festival, in portraits of church members as the 12 disciples of Christ.

Over the years, the number of Sundays when Ed missed church could perhaps be counted on your fingers. Even in retirement, living at Oklahoma Methodist Manor, he was a dedicated viewer of the church’s live-stream worship.

Yet perhaps the greatest indicators of the Monnets’ dedication to Boston Avenue are children and grandchildren, active members of the church who give of their time and talents in their own ways.

Daughter Irene Monnet Brown, who started singing in the choir at age 4 and continued in the Chancel Choir, remarked, “I found my voice at Boston Avenue.”

She married her husband, John Brown, at Boston Avenue; they were happy to join the church when they moved from Chicago to Tulsa 15 years later. Their children are involved as well: son John co-chairs the senior high youth group, and daughter Marjorie is mission co-chairperson. She went on the recent mission trip to Nicaragua.

Ed Monnet Jr. — Irene’s brother — has fond memories of growing up in the church. He made lifelong friendships in Sunday School and choir, and he recalled the childhood fun he experienced in Scouts. (Troop 20 had nearly 100 members, with regular hikes and campouts.)

Ed Jr. and his wife, Jimmie, raised their children — Parker, Tori, and Ed III — in the church’s life, and they now joyfully bring their grandchildren any time the kids are in town. They are deeply dedicated to all the children of Boston Avenue: “Mr. Ed” has taught elementary Sunday School for 38 years, and “Mrs. Ed” teaches as well.

Ed Jr. said Boston Avenue is his second home, and has always been “welcoming and comfortable, not an intimidating place to be, but warm and embracing.” He said it was healthy for him to have church as part of his routine growing up, that attending every Sunday was meaningful in its constancy.

He said that he is grateful to be part of “a place that makes it easy to attend regularly, where there is something of interest for everyone ... big enough that there are people with whom you can build friendships and relationships, that there are enough activities to keep you busy. (Boston Avenue) is a large church that has always been home.”

For four generations, Boston Avenue has been home to this family that has shown faithfulness and love for church. I am grateful to have gotten to know them a little bit, and to know Boston Avenue better through them.

(From The Word, March 30, 2018. Caitlin is the church’s communications director. Reprinted with permission.)