Jerrie Lindsey read about the ministry of deaconess, a laywoman’s vocation dedicated to love, justice, and service.

She thought, "That’s where I belong."

But she merely tucked away her copy of the United Methodist Women Response magazine issue that spotlighted deaconesses. It was 2006, and she was dedicated to her family and to volunteering in Holdenville’s schools; her local church, Barnard Memorial UMC (McAlester District); and UMW.

Yet the idea persisted. Her three children grew up.

Lindsey was consecrated as a deaconess at the 2014 UMW Assembly in April.

"I think I’ve felt this my whole life and … Yes! I’m finally getting to do it!" she exclaimed in July. She was interviewed during Mission u; she taught the "How Is It With Your Soul?" spiritual study.

As a teenager, Lindsey said, she sensed God calling her to service, but not as clergy.

She joined UMW at age 19, while attending college.

She long has served as an advocate, especially for children.

"Life experience really has a lot to do with our calling," Lindsey said. "If I never would have advocated for my children or, through my daughter’s illness, advocated for her while she was so sick, I wouldn’t be advocating for other children."

She was a band parent, basketball booster, etc. "School volunteering was advocating for all children."

And advocacy is very much a deaconess role.

The UM Book of Discipline defines this calling. These laywomen function "through diverse forms of service … to make Jesus Christ known." They:

• alleviate suffering;
• eradicate causes of injustice and all that robs life of dignity and worth;
• facilitate the development of full human potential; and
• share in building global community through the church universal. (Paragraph 1314.1)

Lindsey committed to the deaconess path in 2011, after attending a discernment event, which was sponsored by the General Board of Discipleship and the Office of Deaconess and Home Missioner.

She was accepted into the program and completed five graduate-level classes, including theology of mission and UM history. She holds a bachelor’s degree in medical technology.

A deaconess must find her own place of service. Unlike clergy, they do not itinerate. These women are professors, pediatricians, nutritionists, social workers, church staff members, and more. They are expected to serve at least 24 hours a week in their ministry.

"The vast majority are serving in a ministry and then decide to be a deaconess," Lindsey said.

But that’s not her story.

She remained unsettled even after completing the training in late 2012.

"I feel like I’m swimming in peanut butter," she told Pastor Chuck Rettig at the Holdenville church.

Then a close friend proposed Court Appointed Special Advocates (CASA) for Children. Two months later, someone else made the same suggestion.

Lindsey identified God directing her through those friends. She walked into the nonprofit’s office in Ada in 2013 and learned its 30-hour training series was beginning a new rotation.

Today she is a CASA volunteer and part-time office assistant there.

According to the national CASA website, judges appoint these volunteer advocates to represent the best interests of children who have been removed from their homes due to abuse or neglect. Their role is to watch over and advocate for those children as they process through legal and social service systems. They visit, report regularly, and make suggestions focused on what’s best for a child. Well-known psychologist Dr. Phil McGraw and his wife, Robin, are official spokespersons for CASA.

A volunteer stays with a case until it is closed and the child is placed in a safe, permanent home.

Lindsey has been appointed to two cases. For one of those, she served five siblings in two placements.

"God uses us where we are, builds on that, and helps us grow and do what he needs us to do," she said.

Robbie and Jerrie Lindsey are grandparents. Jerrie also serves as UMW president for McAlester District and is a certified Lay Servant. Robbie, a computer programmer, also is the music director for Barnard Memorial UMC. 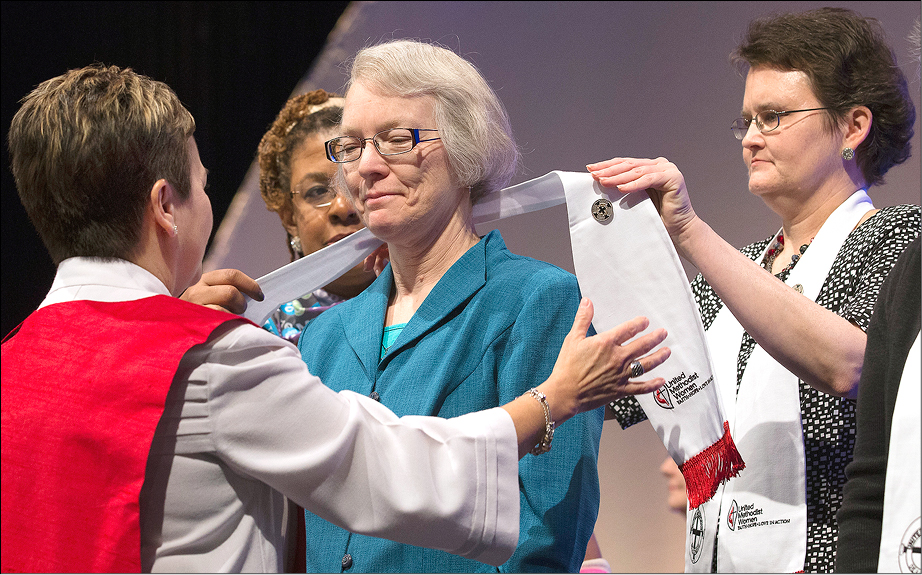 Deaconess Jerrie Lindsey of Holdenville is consecrated April 27 by Bishop Cynthia Harvey, left, at the 2014 Assembly of United Methodist Women, held in Louisville, Ky. The 26 new deaconesses on stage impulsively joined hands during prayer. Asked how she experienced the ceremony, Lindsey whispered, "It’s just … amazing," and tears welled. Her husband and a daughter attended the ceremony. Some 150 UMW members from both Oklahoma annual conferences were there, too. 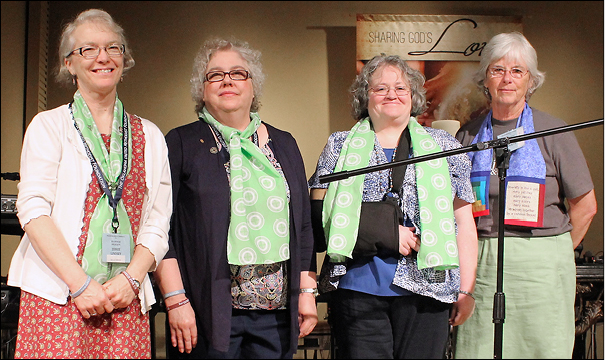 Deaconesses in the Oklahoma Conference are introduced May 26 during the Laity Session of the 2014 Annual Conference, at OKC-St. Luke’s Church. From left are: Jerrie Lindsey of Holdenville, Elaine Parrent of Oklahoma City, Shelly Owen of Tulsa, and Pat Hoerth of Turtle Rock Farm.