Pilgrims pause after 100 Walks to Emmaus 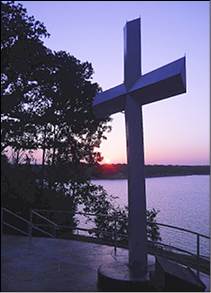 By Joseph Harris, Director of Communications

Small beginnings can lead to huge success for God’s Kingdom. This happened with a dream to create a Walk to Emmaus community in southern Oklahoma about 25 years ago.

On Oct. 10, a gathering celebrated the 100th Walk at Cross Point Camp.

Emmaus is a three-day experience of Christian spiritual renewal and formation as well as a short course in Christianity.

While serving as superintendent of the Ardmore District in the 1990s, I was challenged to either make economically viable or close down the Oklahoma Conference campground at Lake Texoma.

The camp’s board members and I saw the commitment and enthusiasm for the camp in the district’s church members and its beautiful location right beside the lake.

We wanted to do everything possible to save it.

Clearly we needed to increase use of the camp, not only by Oklahoma United Methodists but also by the general public. Other groups could utilize the camp for company retreats, family reunions, etc. We began dreaming to draw more diverse people to this wonderful camp with which God had blessed Oklahoma.

The Walk to Emmaus had been transforming for my wife and me during our time serving in Tulsa. We saw possibilities in it to promote the camp and to nurture Christians in the region.

But previous Walks in Oklahoma had been held only at churches, never at a campground.

There was concern that Emmaus would be significantly different at a camp. Would changes necessary for that setting have a negative effect on the experience? Could we recruit enough pilgrims to what seemed a remote location?

It took two years of planning, starts and stops, and prayerful consideration, but we held the first Walks at Cross Point in 1991. Attendance met the minimum for a Walk.

Yes, we began small, but God had larger plans.

More Walks were held there. More people were lifted spiritually, and camp awareness and use increased. More clergy became involved, and more denominations.

Participation in a Walk to Emmaus begins with an invitation from a sponsor who has walked. People who accept then complete an application. Leaders prayerfully consider each applicant and, in God’s time, extend invitations to specific Walks.

From the moment of arrival, participants encounter New Testament Christianity as lifestyle. The objective of Emmaus is to inspire, challenge, and equip people for Christian action in their homes, churches, communities, and places of work.

Emmaus lifts up ways for our grace-filled lives to be lived and shared meaningfully with others.

It is offered through The Upper Room, a branch of the United Methodist Board of Discipleship.

Since 1991, more than 3,000 people have been on Cross Point’s Walks to Emmaus, according to leaders’ estimates. Also during that time, with the camp board’s leadership, the facilities have been upgraded and expanded, including two large cabins that opened this year.

The gathering was deeply personal for me. One guest especially wanted me to hear his story.

When the man first took part in the Walk, he was not attending a church and had not been involved in church life for some time. Because of the Cross Point Emmaus experience, he returned to God, trained and became a clergyman, and has planted five cowboy churches.

He simply wanted me to know that what began small has impacted thousands of lives.

The Cross Point Emmaus community now is known widely as one of the most ecumenical ones within the movement. Baptists, United Methodists, Catholics, independents, and other denominations send pilgrims to the Walks hosted at Cross Point throughout each year.

"Who dares despise the day of small things…" (Zechariah 4:10)

Through 100 Walks, God has revitalized lives, created and energized churches, and increased camp participation in ways only the Holy Spirit knew as we began. Visions, no matter how small, can move forward in tremendous ways when God blesses them.