Sarah Hundley discovered a love for mission work in the eighth grade. Now a college graduate, she has brought her passion from Virginia to Oklahoma City, where she is working with underprivileged children as a new Global Mission Fellow US-2.

"I love it. I feel like this is where I’m supposed to be," said Hundley, 24, who describes herself as a third-generation preacher’s kid. She has committed to two years of working with The Gallery, an after-school program at OKC-Mayfair Heights United Methodist Church.

The program picks up students from four elementary schools in the Oklahoma City and Putnam City districts, Hundley said.

Her role at The Gallery is to work with the children to keep them on the correct reading level. The students will also do art projects.

"I’ve got some ideas for art and contacts with artists around Oklahoma City," Hundley said. She also plans to incorporate ideas from other US-2s.

"I’m hoping to build The Gallery program up," she said. The program started at the former St. John’s UMC, especially reaching out to Hispanic students, and was transferred to Mayfair Heights this summer.

At The Gallery, Hundley follows Kristina Thorson, who returned to her home state, Washington, after completing her two years as a US-2 young adult missionary in Oklahoma.

When she was an eighth-grader, Hundley helped with hurricane relief in Florida. An Appalachian service project followed in her ninth-grade year. She has served food to homeless people and helped with highway cleanups. There was mission work in Brazil and also in Mississippi, where she helped to rebuild homes after another hurricane.

Through this early work, "I found my passion and my love," she said.

The idea of becoming a US-2 came from her father, Stephen Hundley, a Virginia Conference clergyman who is on loan as executive director of connectional ministries for the California-Pacific Conference.

In the future, the University of Mary Washington graduate hopes to work in some capacity as an editor or to continue in mission work. "Or figure out a way to do both," she said. She has a degree in English literature.

Hundley is one of 15 United Methodist US-2s who were commissioned in July to serve two years in U.S. faith and justice ministries. You can help support her with gifts to General Board of Global Ministries missionary number 3022080.

Other Global Mission Fellows serve internationally. All are between ages 20 and 30. 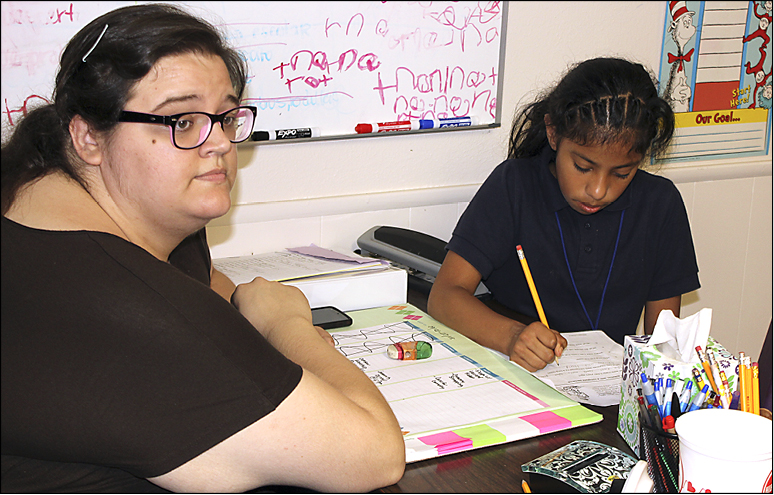 Sarah Hundley watches the class as Mariana Garcia, 10, does her homework at The Gallery. Photo by Chris Schutz