Diana Kinzey was multitasking. She was worshipping at a Methodist church in Belen, Costa Rica, and also thinking of a way she could add to the aesthetics of that space through her passion for sewing, quilting, and embroidery work.

She dreamed of making a worship banner for that church, which was hosting the Stillwater District Volunteers In Mission team that included her.

Kinzey returned to Prague UMC excited about her concept for a banner based on I Corinthians 13. While working on it, she realized she had not seen the UM cross-and-flame symbol in the sanctuary. Thus, banner 2.

She then proceeded to create banners representing Holy Communion, Pentecost, and Easter, and one with a purple "Pax" symbol. All wording is in Spanish.

The church also did not have paraments. Pawnee and Agra churches donated two sets.

All the items were mailed after a dedication service at Prague UMC during Lent. 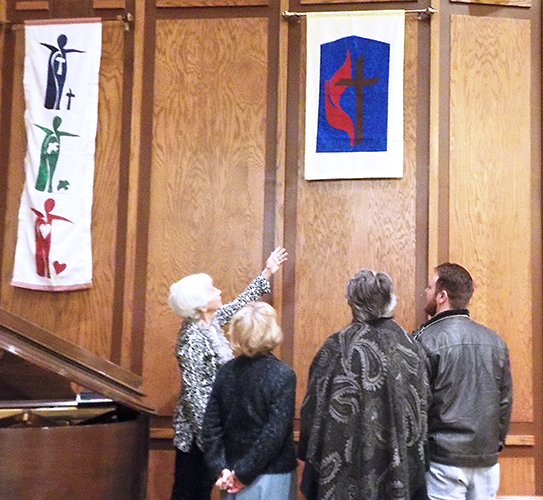 After a VIM mission, Prague UMC member Diana Kinzey launched a project that provided banners and paraments to a church in Costa Rica.