A box fan hummed and birds twittered outside open windows in July as Pat Hoerth discussed her concerns for God’s good earth.

This United Methodist deaconess grew up "immersed in nature" on a 1,600-acre farm in north central Oklahoma.

Her father often woke the children to see sunrise. "We spent evenings laying out on blankets, watching the stars," Pat recalled. And when plowing disrupted nesting creatures, dad took the animals to the house for the family to nurture, then release.

Pat’s farmer dad also twice led Oklahoma as governor and was a U.S. senator. He was Henry Bellmon.

Eight years ago, Pat and her sister Ann returned to the centennial farm near Billings and established a retreat/educational center on a portion of the property. At Turtle Rock Farm, they focus on spirituality and sustainability.

Organic farming, raising chickens, beekeeping: "It just kept emerging that there were some things we could do as models, as teaching, and as environmental improvement," Pat said.

Engaging people in eco-spirituality and working for environmental justice is Pat’s calling as a deaconess, which is a certified ministry for laywomen. She was commissioned in 2008. She also is a trained spiritual director.

Her childhood on the farm certainly influenced her. In college she majored in sociology and journalism. Then a seminary class "changed my life," Pat said.

She learned "why the story of evolution is theologically important" while studying at Phillips Theological Seminary. The class on the new cosmology and Christianity was taught by Elizabeth Box Price. Hoerth has earned two master’s degrees.

A deaconess is expected to do cutting-edge ministry, Pat said, and "I knew I wanted to teach this understanding. We’ll never know all the wonder that is this planet. It’s just so important. It hurts when bad things happen."

Both at Turtle Rock Farm and as a guest presenter, Pat teaches people to live mindfully in the environment. You do have to build in ways to pay attention to creation during your day, she noted.

She chuckled when asked where she especially notices God. She responded, "Where can’t you see God?"

Sometimes she directs event participants on "a cosmic walk." They track a timeline that spirals outward chronologically, representing billions of years. It pleases her when they realize "we’re really small compared to all of this," Pat said.

Making that connection can lower anxiety and lead to productive discussions on environmental issues, she said, instead of political debate.

Pat made this tool portable to guide small groups at churches, etc. In 2014, she presented it at the global Assembly of United Methodist Women (UMW).

For Mission u 2016, a national UMW educational program, she wrote the children’s study book on climate justice. She was an adult study leader at Oklahoma’s Mission u 2015.

Pat serves on the Environmental Coalition of the Oklahoma Conference’s Board of Church & Society. She is a presenter for the Coalition’s new educational program, "Where in the World Are We — and You — on Changes in Weather, Climate, Nature?" She represented the coalition in the 2015 Oklahoma City Earth Walk.

People tell Pat, "We’re so glad you’re out there doing that" sustainable farming at Turtle Rock. "We live in the city and can’t do all that."

Their comments challenge her. "Thank you, but it’s not just about us doing this," she mused. "It’s been compelling me to consider what can be done in the city."

Pat is pursuing ways to help people in the city connect with nature. She also has an Oklahoma City home, where she plans to nurture a pepper patch and photographs birds drawn to feeders in her yard. She supports the work of an urban farm. She provides spiritual direction from an office provided at OKC-St. Luke’s.

You can follow her blog at https://TurtleRockFarm.wordpress.com  — Holly McCray 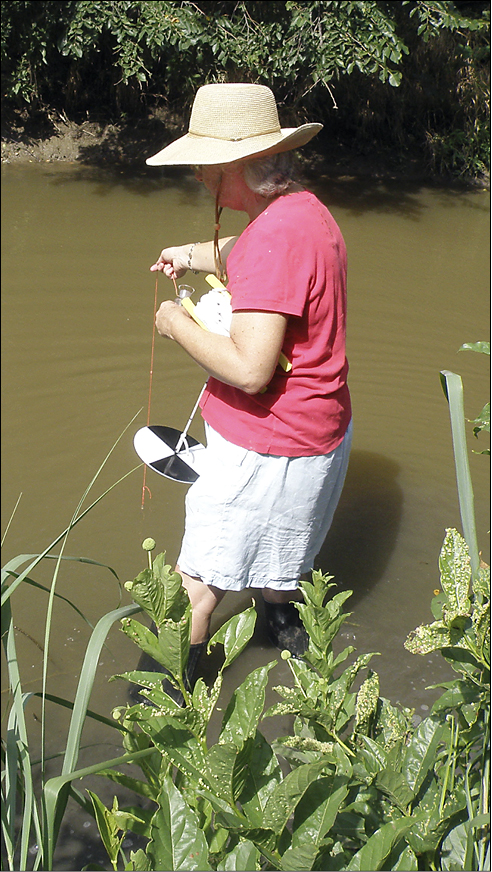 Pat Hoerth monitors the water in Doe Creek as a Blue Thumb volunteer with the Oklahoma Conservation Commission. 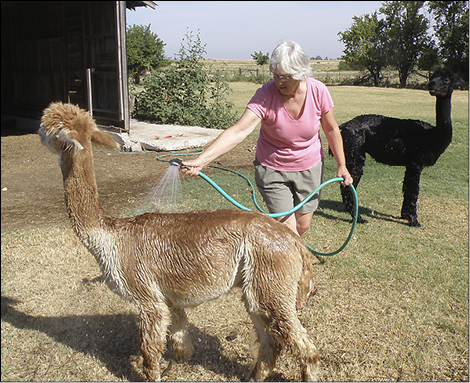