Semaj Vanzant’s smile grew bigger Aug. 4 as he spoke about the Back2School Bash, a ministry by The Christ Experience United Methodist Church, which he pastors a few blocks from Oklahoma’s Capitol.

On the previous weekend, the church had provided backpacks and lots of supplies to schoolchildren. Rev. Vanzant clearly was pleased by the members’ efforts and by the number of inner-city students they helped. He highly values education.

Educators are prominent in generations of Semaj’s family, including a New Orleans school superintendent and a principal. They’ve led in advocating for education. They’ve built relationships with civic leaders.

Growing up, Semaj recalled, "I was always in the company of a lot of legislators" in Louisiana. In high school, he helped create a civic program for New Orleans teens.

His family legacy also includes a vibrant church life and helping "the less fortunate," he said.

"With joy" because they could help, his family gave food and car rides to people.

"We were never sheltered. Nobody was ever too dirty for us to hug," Semaj said.

They also were active in black fraternities/sororities, which are "always advocating against inequalities and for justice," said Semaj, an Alpha Phi Alpha member.

Not surprisingly, political science was his major at Gannon University in Pennsylvania.

"I’ve always had a natural desire to help other people and a lot of them," he said. Working to change systemic issues has the widest impact, he noted.

"I woke up that next morning overwhelmed with this spiritual awareness that I was not who I was before I went to sleep," he said.

He cried as he ironed a shirt for worship, and "hated the fact that I cried — I’m a football player!" He cried during worship. During the invitation, he went forward.

He had planned a career in politics. Instead he entered seminary.

Studying at Princeton Theological Seminary, Semaj served internships with Rudy Rasmus of Houston, who is an acclaimed pastor known for reaching out to the poorest people, and with Church Without Walls, also in Houston. Now Semaj is studying for a doctorate from Saint Paul School of Theology at Oklahoma City University.

Semaj claims "a voracious appetite for the Scripture."

"I see God on the side of the oppressed, downtrodden, disenfranchised, marginalized," he said. "Jesus would hang out with them to bring them in (to the Kingdom). Christ was never just in the temple.

"I want to have the same attitude. God has put me in places to do that."

In 2011, Semaj became senior pastor of the Oklahoma City congregation, which is mostly African-American. Linda Truitt is associate.

Secure in his leadership ability and a self-described extrovert, Semaj said two of his most valuable ministry tools are the Bible and a current news resource.

He seeks to impact lives at the point those two intersect.

"Our society as a whole is surface. We would judge a whole book by its cover, without any desire to discover the depths of that person, " he said. "My fight is to see deeper, be deeper, let conversation happen. My stance comes through my race, but not only race.

"A lot of my fight for economic justice, education reform, and equality for all comes through my race because I know it the best."

In January, an Oklahoma lawmaker proposed a ban on wearing hoodies in public, citing criminal cases. Joining other African-American pastors who objected, Semaj rallied his congregation to wear hoodies for Sunday worship, and he preached while wearing one.

The proposal did not pass at the Capitol.

Also that month, Semaj was keynote speaker at a Tulsa vigil on Martin Luther King Jr. Day. He told that audience, "Stand up against those things that are wrong, and stand in solidarity with the less fortunate," according to a report by the University of Tulsa Collegian.

In 2014, The Christ Experience Church hosted a social justice seminar presented by the Conference United Methodist Women. Semaj has also welcomed local police officials for a roundtable at the church concerning the Spring Lake housing subdivision.

He speaks with enthusiasm about the growth in impact and in people for the congregation that meets at NW 17th and Kelly Avenue. Semaj sometimes walks the community as he prays.

Carla and Semaj Vanzant have two young sons. "We teach them there is something more to people than skin color and the way they look, whether in a suit or rags," the pastor said.

The boys also are at the heart of his greatest fear, he admitted. Semaj knew an African-American pastor in Louisiana who was recently killed by a policeman.

"While I know that is a reality, I can’t let that hinder me," Semaj said. (Of note: His own father was a policeman.)

"While I know that is a reality, I can’t let that hinder me." 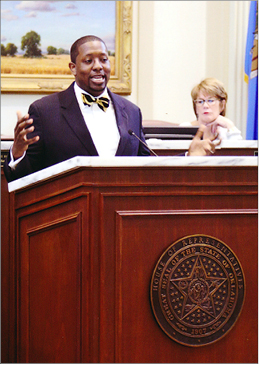 Pastor Semaj Vanzant gives the prayer Feb. 23 in the state House of Representatives. He was invited by Rep. George Young. 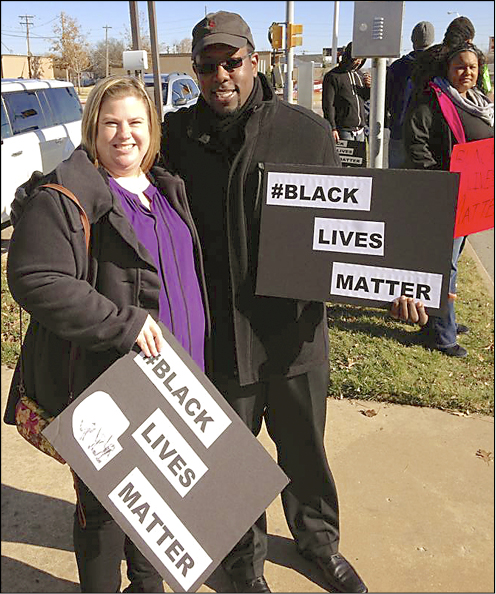