‘Young people are going out and trying to change things’

Human trafficking does not only occur in other countries – the exploitation of people happens here, too. That’s the message that youth ministry planners hope to convey when they present a Human Trafficking Symposium to the public on Sept. 26 at Oklahoma City University.

Youths from churches around Oklahoma have been immersed in the topic for much of the year, including a United Nations/Washington, D.C., educational tour that took place during Spring Break.

Josie Worthington of Tulsa said symposium preparation has been extensive by the 12 youths selected by their churches for the UN/DC tour. The group read books on the topic of human trafficking, wrote essays, and decided whom to invite to speak.

People don’t know enough about the subject, Josie said. "I just want people to know what’s happening and put a stop to it."

She also wants people within The United Methodist Church to know that "young people are going out and trying to change things." She is now a freshman political science major at the University of Tulsa.

Primary speakers for the symposium are:

Barbara Amaya, who is the author of "Nobody’s Girl," which is described as a memoir of lost innocence, modern day slavery, and transformation; and

Susan Greer Burton, director of Women’s and Children’s Advocacy for the denomination’s General Board of Church & Society (GBCS), based in Washington, D.C.

Amaya tells how she was manipulated, abused, and exploited for over a decade by traffickers in Washington, D.C., and New York City. She has become an advocate for the rights of human trafficking victims and all victims of abuse and exploitation.

Burton is program director for Seminar Design, Education, and Leadership Formation with the GBCS. Since joining the board’s staff in 2001, Burton has encouraged seminar participants to deepen their faith, seek vocational discernment, and grow in understanding of the biblical mandate to "do justice, love mercy, and walk humbly with our God."

Josie said learning about "people being treated so inhumanely" was an eye-opener. Information about human trafficking led to her decision to major in political science, with the goal of going into advocacy and nonprofit work.

She learned that human trafficking "is not just women, and it’s not just sexual," she said. It can involve anyone of any age, gender, or race. Victims also can be forced to perform labor.

Degradation of human rights is "hard to wrap your mind around," Josie said.

Through the tour, Josie said, she gained "a better understanding of how the Church tackles these huge issues of human rights."

Some of the youths will teach parts of the symposium.

Josie’s talk is titled "Journey of a T-shirt," in which she will address trafficking through consumerism. Each T-shirt in a store is "touched by so many people," and the workers may not have fair wages, hours, or working conditions, she said.

Tour member Blake Lemmons of Hennessey plans to teach a role-playing game in which people find out what it’s like to be stranded in a foreign country, without knowing the people or the language, and being taken advantage of in various ways. The game is well-suited to youth groups, he said.

While in D.C., the group met with the staff of U.S. Sen. James Lankford of Edmond to discuss concerns about human trafficking and how it is being dealt with in Oklahoma.

Josie said she would "love to see more action being taken" in Oklahoma. An example would be "how police handle situations that could be human trafficking situations."

To register for the Sept. 26 summit, go to www.okumc.org/youth.  Cost is $15 per person, and scholarships are available.

In addition to the Council on Youth Ministry, sponsors are the Board of Church & Society and Discipleship Ministry Team. 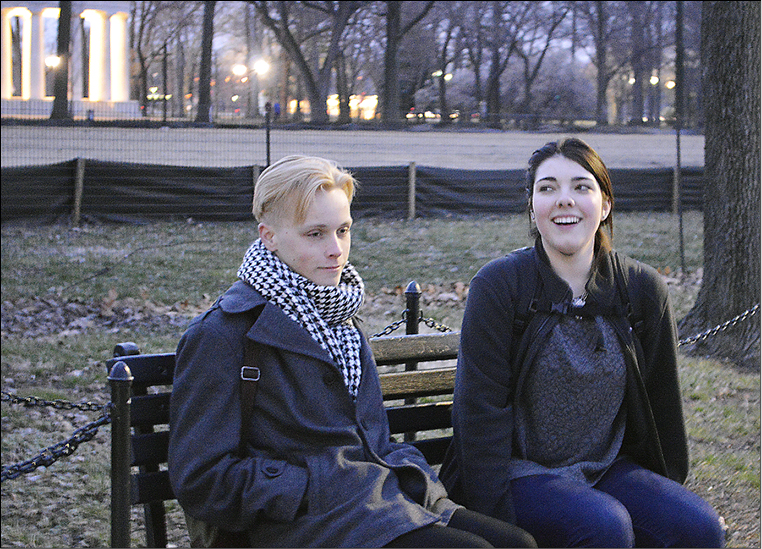 In the U.S. capital, Garrett Johnson of OKC-New Hope and Josie Worthington of Tulsa-Boston Avenue pause near the Jefferson Memorial (background).