"We went at the request of Abasilum Smith, who is the pastor of six Methodist churches" in that area, said Venita MacGorman, the Norman church’s director of music ministries.

"Five of the six churches had no musical instruments and no music leaders, and very few people in the churches could read music."

For decades the churches had been using an edition of the British Methodist Hymnal that had only lyrics, no musical notation. Rev. Smith’s churches recently had obtained new Caribbean Methodist Hymnals, but the people needed assistance learning the hymns. Many lyrics were set to traditional Caribbean tunes.

The 14 volunteers worked day and night with adults and children. They began with basic music reading skills and basic instrumental techniques.

MacGorman said, "Everyone was immersed in music reading for four or five days, depending upon their school and work schedules."

"The hours were long, the schedule was rigorous, the resources were not plentiful, and it was hot," she said. "But it was a mission trip, not a vacation, and despite the challenges it was very, very rewarding."

Some students took copious notes and traveled great distances for the opportunity to learn music.

"It is very hard as adults to try to learn something brand new from scratch, and it can make you feel vulnerable," Corey said. "We were so impressed with their eagerness to play our music games and to take a chance on learning something new."

Norman dentist George Wulfekotte, an amateur guitarist, described one of his favorite moments. During an evening performance, a smiling little girl sat next to him.

"We were going to sing and play ‘All Things Will Be Fine,’" he said. "I told her I can play the song on the guitar, but I don’t know the words. Her face lit up, and she looked up at me and said, ‘I know the words!’ For the next few minutes, it felt like it was just the two of us playing and singing together. It was the best song I ever played."

MacGorman said she was pleased with the progress made by the Jamaican music students in just one week.

"At our closing worship service together, we had young people and adults playing guitar, drums, and keyboard while everyone sang, and it was incredibly beautiful," she said. "I watched those instrumentalists and thought, ‘This happened because we were here.’"

Jeni Markham Clewell, associate pastor and director of children’s ministries at St. Stephen’s, hopes that first mission trip leads to a long relationship between Jamaica and Norman. A second VIM team from the church went to the island in July.

"The Methodists in Savanna-La-Mar trusted us with their dreams of having music play a more vital part in their worship of God and in their daily lives. We were honored to receive that trust and blessed beyond measure by their gracious friendship and warm acceptance," said Rev. Clewell. 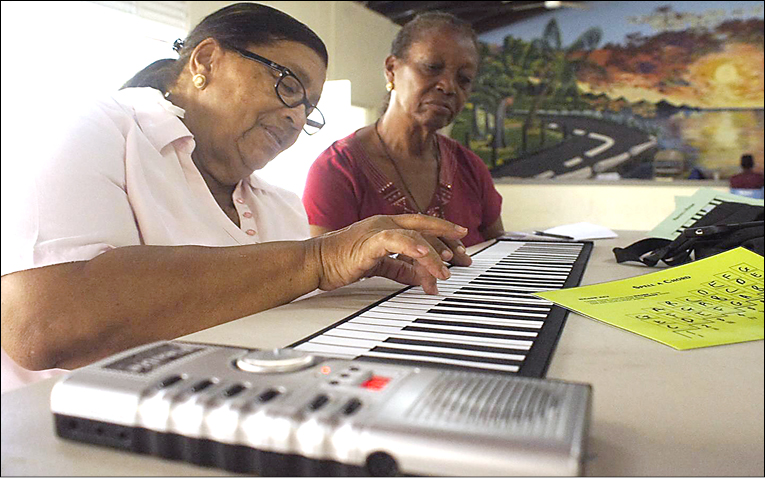 Adults in Jamaica practice playing a keyboard for their Methodist church.