Minco United Methodist Men gave a book that is championed by UMMen nationally to each firefighter and law officer at a recent banquet in the church.

The UMMen, a group of about 10, purchased 100 copies of "Strength for Service to God and Community" as gifts to express their support of the public servants in the community and area. The men’s group chartered two years ago.

About 70 people attended the appreciation banquet, despite some flooding that day due to heavy rainfall.

Some honorees conveyed their regrets; they had been called to work because of the flooding. That’s what these public servants do.

And that’s why Minco’s UMMen wanted to say thank you in a special way.

"It takes a very special person to put themselves in a situation not to help themselves but to help others," said Don McMahon, UMMen secretary.

During the event, church leaders prayed for them and their spouses and families, and the full text of "Taps" was read. Minco’s United Methodist Women provided the meal.

The gift book originated in a collection of daily devotionals published in 1942 for U.S. military personnel. In 2000, young Evan Hunsberger chose updating and republishing "Strength for Service to God and Country" as his Boy Scout Eagle project. The General Commission on United Methodist Men backed his effort.

Rob Walton, a former Oklahoma Conference president of UMMen, challenged other chapters to follow the lead of Minco’s UMMen in distributing the books.

Find out more at: www.gcumm.org/ministries/strength_for_service/ 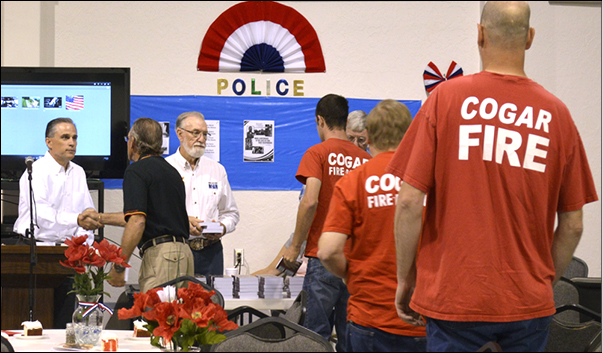