Into the wild, ‘Where’s God in the midst of this?’

Summer break is a good time to take it easy, sleep late, and eat what you want when you feel like it — unless you are a seventh- or eighth-grader attending Wilderness Camp.

The specialty summer camp, held annually by the Conference, gives youths practice in forming a Christian community while camping out in a rustic environment.

The boys and girls are divided into small groups. One of their daily tasks is to decide what they will cook for breakfast and dinner.

Deciding on meals gives the youths experience "in dealing with surprises and consequences that may accompany group decisions," according to written material about the camp.

For example, "a group may decide to go hiking or just sleep late," instead of meeting to decide on their meal requisition, according to the material. If they miss the deadline for requesting ingredients, they will face empty plates at the next meal.

The adults who are there are fellow campers, said longtime volunteer Carolyn Webster. "You facilitate more than you lead," she said. "You ask them enough questions until they figure out they know how to do it."

The camp, which marked its 60th anniversary this year, takes place in a remote area of Canyon Camp.

The experience can be frustrating for youths at first, said Montie Jones, a former campus minister at Cameron University in Lawton. Rev. Jones’ first association with the weeklong camp in western Oklahoma was in 1965.

There is no such thing as a smartphone or electronic game at camp. Those are confiscated for the duration of the program. Even if someone should sneak in a cellphone, there is no reception in the area, camp officials said.

"At first, they don’t like it at all," Jones said.

"The first two, three days there’s a lot of anger. One of the challenges is to get comfortable with the group that they’re in," Jones said. "They have to speak up and say what their interests are and what their needs are."

Campers discuss "what are the particular gifts you might have to contribute to the group," he said.

Jones said one previous youth camper, named Ann, was so timid that she hid behind trees and shrubs from the other campers.

"The adult campers in her group would encourage the other youth members of her group to eventually ask Ann to state her opinions or interests," Jones said. She would do so, but in such a low voice that they had to ask her to speak up.

On the fourth day, when her group had decided to make a dinner of spaghetti and meatballs, Ann’s gifts emerged.

A camper named Sean poured water into a big skillet to cook the pasta.

Ann, who was cooking the meatballs, asked Sean how he was going to drain the spaghetti. She suggested that he get a big lid to keep the spaghetti from spilling on the ground as it was drained.

Sean "assured her he knew what to do," Jones said. "He came back with the skillet and one lone strand of spaghetti hanging over the lip of the skillet."

The other campers, except for Ann, told Sean he had ruined their supper, Jones said.

Ann, meanwhile, had counted the meatballs and figured out that each camper could have 1½ meatballs for dinner.

She gave two meatballs to Sean.

"In her quiet ways, she literally transformed how everyone in that group saw her and saw how they could be," Jones said.

As the week progresses, Jones said, the campers discuss "What’s this got to do with my faith journey? Where’s God in the midst of this?"

The youths work together to hang tarps over frames to make sleeping tents, with separate tents for boys and girls. The youths dig latrines (One is called "John," the other called "Mary," Webster said.) They cook breakfast and dinner over a fire pit they themselves dig.

Campers are required to wear leather boots that cover their ankles for protection against snakes and cactus needles.

Activities may include hiking and exploring the canyon. Sometimes, the campers are tasked with dismantling a beaver dam that poses a flooding risk for the area, Jones said.

Wilderness Camp features a cook shack with rustic kitchen and dining area for the noon meal that is prepared and served by adults.

At noon, all the campers share in a Bible reading and story connected with that reading, Jones said. If there is rain, the noon devotional might cover the story of Noah and the flood and how it relates to the campers.

In the evening, the young people go over what happened during the day and help compile a group story about their adventures.

Parents report they often notice a marked change in their offspring after Wilderness Camp.

"Their faith gets grounded," Jones said. 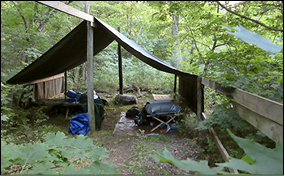 Made by hanging a tarp, a tent in shady woods offers overnight shelter. Boys and girls are housed separately. 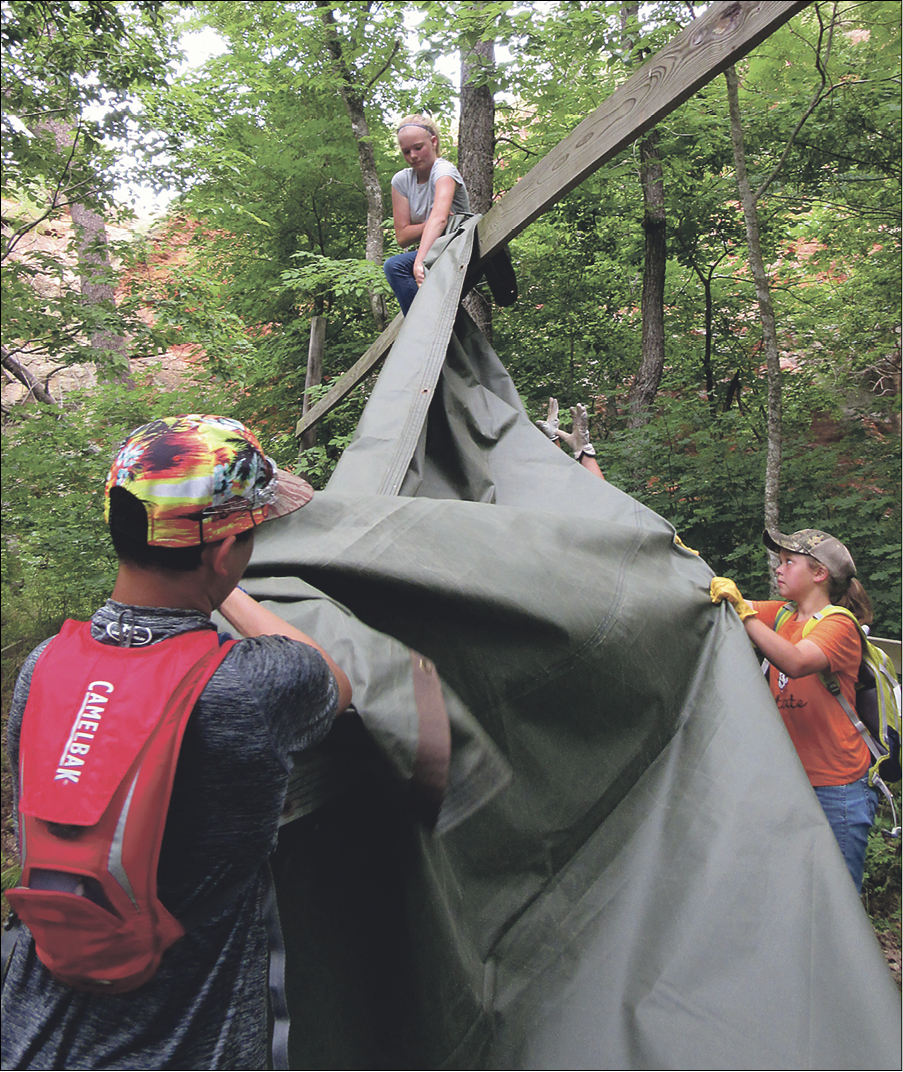 Several campers team up to position a tarp over a frame to make a tent during Wilderness Camp, June 18-24, in the backwoods of Canyon Camp near Hinton. 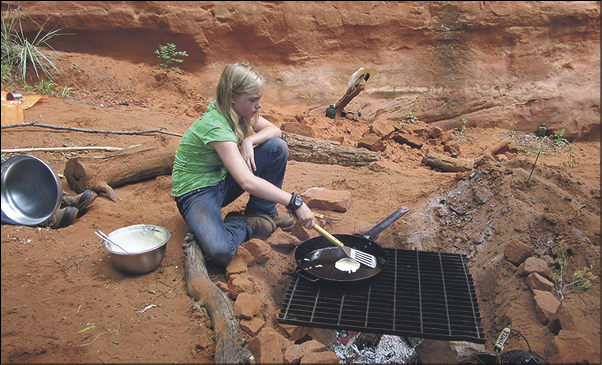 A young camper concentrates on cooking pancakes over a fire pit. Youths must start a fire and prepare their own breakfasts and suppers. 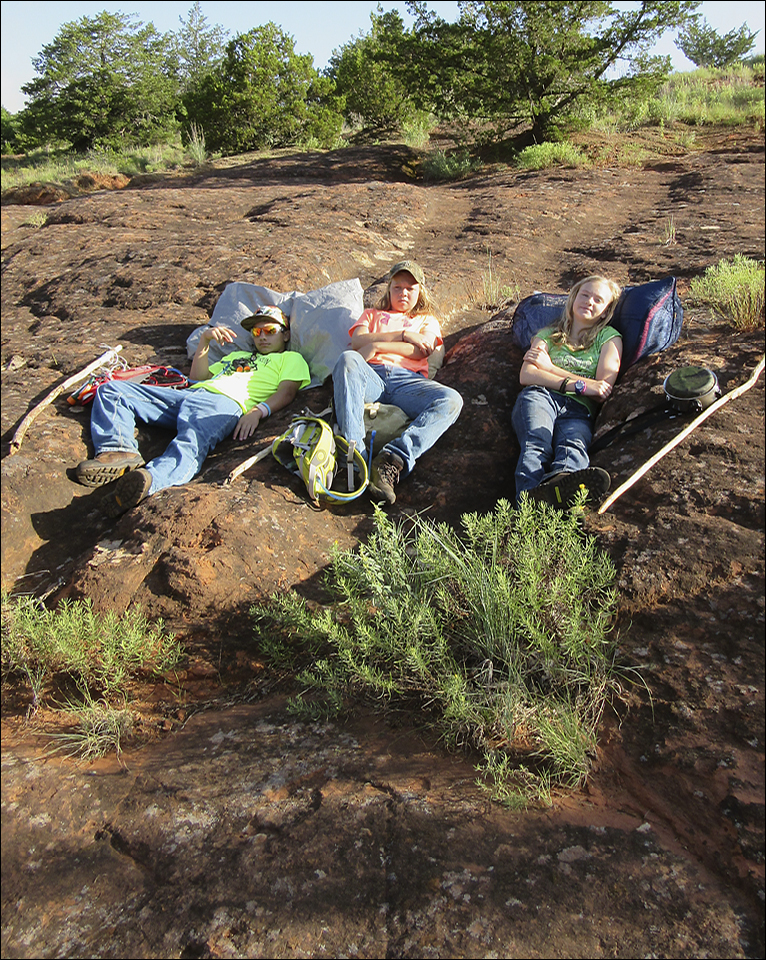 Three Wilderness campers find a comfortable spot to rest, with their walking sticks nearby, in a remote section of Canyon Camp, southeast of Hinton. Hiking is one of the main activities during the camp each June. Evenings bring opportunities for stargazing on the smooth, broad rock surfaces. 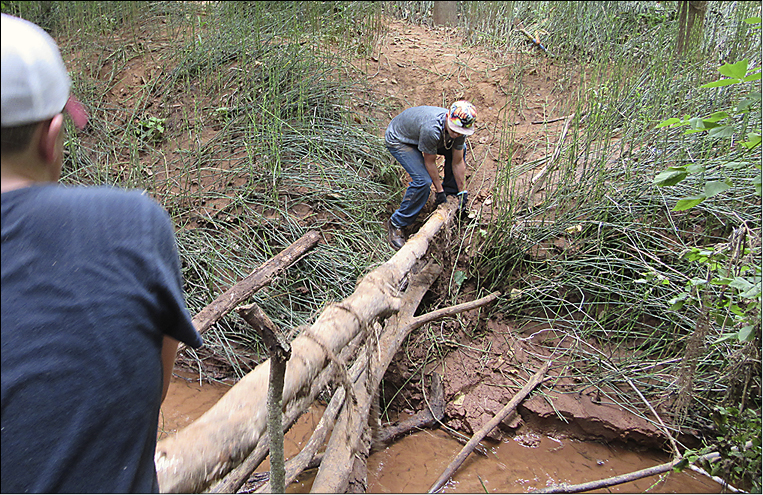 Boys bind logs to form a footbridge for crossing a ditch.