Through the national Foundation for Evangelism, this award promotes the cause of evangelism in every annual conference of The United Methodist Church.

For 23 years, Anderson has volunteered in several roles with The Education and Employment Ministry (TEEM), which is a UM-related aid agency in downtown Oklahoma City.

He came to know Christ in his 30s. The businessman is an active member of OKC-First United Methodist Church.

Mark McAdow, senior pastor of First Church, said Anderson is a TEEM luncheon speaker who shares the Gospel every week.

"He has led over 2,900 people to Christ over the years, and follows up with each one for an additional five weeks, providing encouragement and a Bible," wrote Rev. McAdow.

"He stands in the gap on behalf of the marginalized," wrote Nancy Adler, a lifelong friend.

Anderson is on the Steering Committee for the Billy Graham Evangelistic Association. He trained 26 counselors for one of Graham’s crusades, and he is working to bring Franklin Graham to Oklahoma City in 2015.

Rev. Adler wrote, "Our denomination is known for having open doors. Marty goes inside the doors to be fed. When he is filled up, he goes outside to reach out in Jesus’ name. The open doors go both ways. And he has the key. It’s Jesus." (excerpted)

Rev. Daniel is senior pastor of Ada-First UMC, where he was appointed in 2010.

During his tenure, he has led the congregation in significant growth and in programs such as Park Ministries, the Lambs, and nursing home ministry. A contemporary worship is in its planning stages. Staffing has increased.

He is directing the congregation in the "Readiness 360" venture, which evaluates the vision and mission of Ada-First. This church is one of six in the Ardmore District chosen to participate in the Conference-supported initiative, which focuses on exploring new frontiers of ministry in specific communities.

Daniel also has been active in the city’s Ministerial Fellowship and served as its president.

He is enrolled in a doctoral program at Perkins School of Theology. He was ordained in 1997.

Roberto Escamilla, who is minister of evangelism at Ada-First, said Daniel’s ministry certainly fulfills the criteria for a Denman recipient: high leadership skills; significant membership growth in the local church; innovative programs and projects that enhance the works of evangelism; a demonstrable concern and caring for persons, especially those who are marginalized; effective evangelism preaching and worship; and a real passion for evangelism that attempts to reach the unchurched person for Christ.

District Superintendent Greg Tener said, "We recognize the visionary leadership and dynamic preaching of a truly dedicated servant of God." 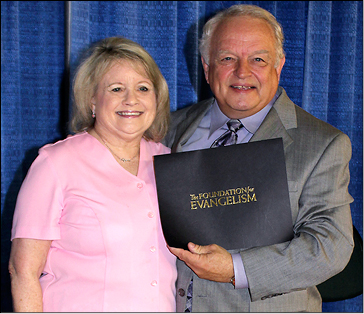 From left are Penny and Marty Anderson, above; and David Daniel with Ray Crawford, below. 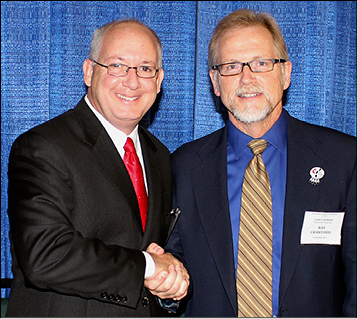