Every biker has a "road name." For Hayes, the UMMA leaders chose "The Bish."

"The Bish" spoke that evening to more than 150 people during Fire on the Water, a Christian motorcycle retreat May 16-18 at Fin & Feather Resort, Lake Tenkiller.

This event was launched in 2013 by riders Eddie and Patty Gill, who are members of Tulsa-Christ United Methodist Church.

The Gills are known as the "founding missionaries" of UMMA. Both are certified UM Lay Servants; they travel and witness as Million Miles 4 Christ Ministries.

UMMA chaplain is Stephen Hale, another biker and an associate pastor of OKC-Chapel Hill. In March 2012, the General Board of Global Ministries certified him as the first UM motorcycle chaplain.

Rev. Hale said one U.S. statistic makes clear the "huge explosion of people interested in motorcycles and riding them."

The number of motorcycle licenses issued in the United States grew from 9 million in 2009 to 25 million in 2012, he said.

"That’s a multitude of opportunities for evangelism."

Hale classified bikers in three categories: the "one-percenters," or outlaws; the party crowd; and the "everyday people," who enjoy getting outdoors and who view biking just like boating.

"I minister to people who ride motorcycles from any of those groups," he summed up.

The Gills and Hale met about three years ago, he recalled. Today the UMMA leadership consists of 10-12 riders and is called the Roundtable, Hale explained.

An exhibit at the Oklahoma Annual Conference in late May offered relevant information. The Gills were there, talking about the beginning of the association and of their journey as a couple.

Eddie and Patty met during a divorce workshop at Christ UMC.

"Neither one of us had any idea, even remotely, of getting into another relationship. But God had other ideas," Patty said.

The Gills began motorcycling to enjoy the outdoors together and accommodate Patty’s special needs. Diagnosed with multiple sclerosis, she uses a wheelchair.

So Eddie drives their trike, with Patti as a rider. A sidecar works for her, too.

At the Sturgis Motorcycle Rally in South Dakota, they learned about a Christian outreach there. Eddie said, "477 people gave their life to Christ during Sturgis bike week, through a Southern Baptist ministry. That was beautiful."

The Gills desired to do more to serve God and sought God’s direction. Eddie experienced a call to "go a million miles" for God and to organize a United Methodist biker ministry, like the Baptist effort.

They have traveled tens of thousands of miles, Eddie said.

"We go and give our testimony. We go and share the story that God has given us," Patty said. "God just keeps opening doors, and we try to walk through all of them."

Fire on the Water included a 120-mile benefit ride, which raised $1,277 for children with disabilities to attend summer camp. And the bikers enjoyed lunch Saturday at Camp Egan. They were invited to worship Sunday at Cookson UMC with Pastor Rudy Freese.

Hayes preaches powerfully, but he said that he was deeply moved by other speakers and the music during that program.

Everyone was in tears when one biker, a former inmate, gave his testimony, Hayes said. The man described how people had kept insisting that he "try Jesus." When he did, his life was transformed.

That man’s story affirms the value of the grassroots motorcycle ministry that is UMMA, the bishop said.

The group "is already doing New People, New Places to the max. They felt there was a need to be filled among bikers. They took what they had and made something out of it."

Anyone is welcome to ride with the UMMA. Most members, but not all, are Oklahomans, but the goal is to reach many more riders. Upcoming events are on the website: www.unitedmethodistma.com. 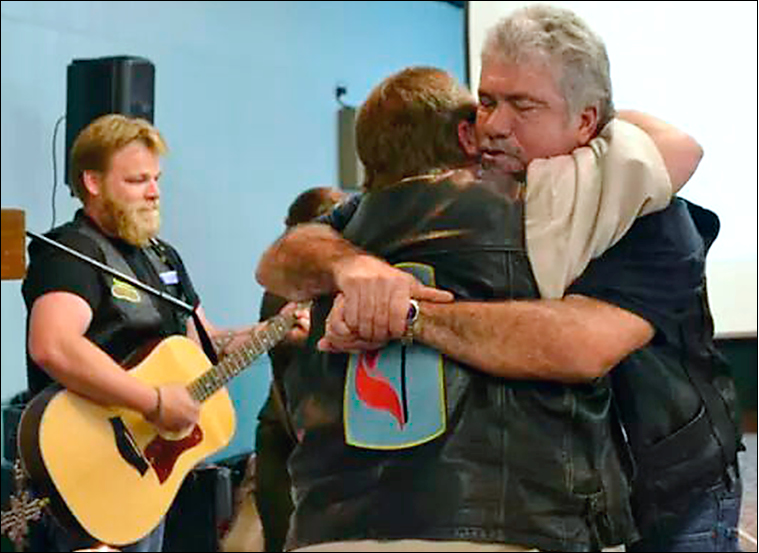 Christian bikers bond during worship May 16 at a retreat beside Lake Tenkiller. Guitarist is Matt Thompson of Ponca City-Asbury. Members of the United Methodist Motorcycle Association wear vests with the UM cross-and-flame logo. 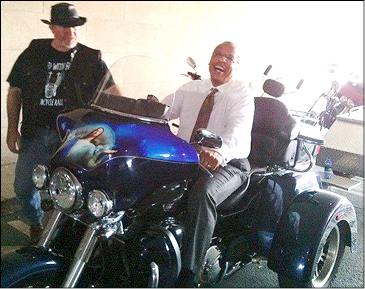