An unused parsonage in Newcastle provided housing for two weeks for disaster response workers from Michigan after a May 6 tornado damaged property in the area, especially in Bridge Creek.

Newcastle United Methodist Church volunteered the use of the parsonage for an eight-member team affiliated with World Renew (Christian Reformed Church) from Byron Center, Mich.

Although the parsonage is mostly unfurnished, it gave the team a place to sleep on air mattresses and to shower. They were able to cook in the kitchen, said Barbara James, a Newcastle member.

The group went to services at the church, and World Renew member Lois Hecksel contributed to the music.

"My husband loaned her a guitar, and she played with our little band during service," James said.

The church had short notice that the team would be arriving, so James gathered dishes from her house for the visitors to use, hung shower curtains, and set up a table and chairs to give them a place to eat.

The team asked for a list of restaurants in the area where they could eat dinner, James said. "They were very self-sufficient," she said.

Volunteers In Mission teams and individual volunteers are needed urgently to help Oklahomans affected by flooding and tornadoes. Contact Richard Norman, Rnorman@okumc.org,  or go to www.okumc-dr.org 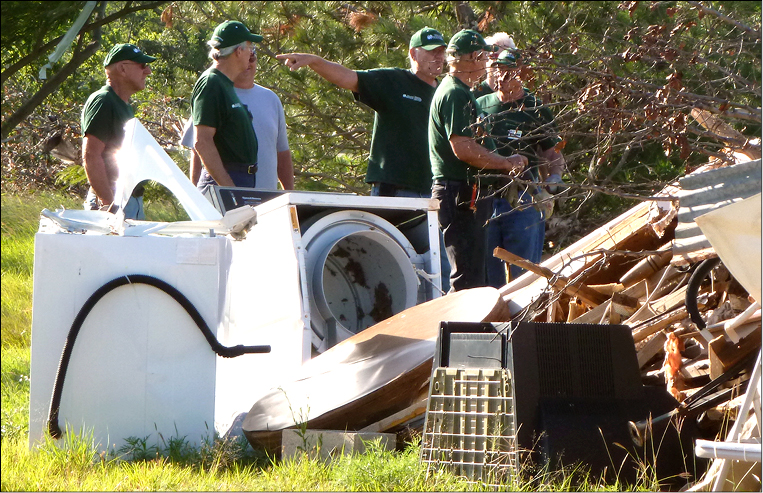 A disaster cleanup team from Michigan prepares to clear debris from property in Bridge Creek.