Witness of Denman winners inspires others

Look to the Christian love shown daily by the 2015 Denman Award winners to inspire your response to the Lord’s question "Who will go for us?" (Isaiah 6:8).

Reasons for their selection pack statements by people who nominated them.

"Simply put, Shirley radiates God’s love. The fruits of the spirit are so evident in her life," said Donna Tonubbee of Shawnee-Wesley UMC.

"When Shirley Adams is aware of a place where God’s church is not reaching out, not being salt and light, Shirley doesn’t just talk about it or spend months in discussion. She says, ‘Here I am, Lord!’

Adams, a member of Shawnee-Wesley for over 35 years, currently leads the Welcome Team, serves as Lay Leader, and facilitates a weekly Bible study. She founded and for 17 years led the church’s fruitful after-school ministry with children.

"She taught me and other church members how important it is to be that adult, that teacher in the lives of children who need to know that God loves them and their church family loves them, too," Tonubbee said.

On applications for food and utility help from the church, some families mark "Yes" on the question "Would you like to know more about our church?" Adams saw follow-up falling behind and took the lead in making contacts.

"Prayer is priority in every area of her life," Tonubbee noted. "Every time she is in a leadership role in any group, opening devotional and prayer (are) essential. We all benefit by that model."

Pastor Ben Williams said, "A forward-thinker, Shirley got help in hanging a Dream Board in the fellowship hall. Her vision is that the board will help Wesley members think about the forward momentum of the church’s ministries. She gives a presentation to each succeeding class of new members."

About 200 people worship weekly at the church.

When Marcia Martin, Vian UMC’s first female pastor, arrived in 2012, attendance was 35, with no youth ministry.

Worship draws 85 people now. Among 38 new members, all but two joined by Profession of Faith.

Church member Daniel Reid celebrated, "For the first time, the church has a second adult Sunday School class, a class for youth, and full-time nursery."

He noted that Rev. Martin endorsed five members to attend the basic Lay Servant course in April, bringing to eight the total Lay Servants at Vian UMC. Because of her encouragement, Reid also enrolled in the Part-Time Local Pastors Academy.

Now Vian UMC hosts Fifth Quarter after school football games and a Wednesday evening meal and worship. A chapter of the Fellowship of Christian Athletes was established in the community.

This pastor effectively uses Facebook and email — and provides automated phone messages for members who don’t utilize the Web.

District Superintendent Emery Mason said Martin "clearly believed that the church was intended to be more than ‘dead and dying’ and set out to give of herself to a vision that God had given her of a church that is ‘resurrected and alive.’"

Martin previously served as youth director at Cookson UMC, pastored by Rudy Freese. He recalled that her efforts there grew "a few youth to a bustling youth group with more than 40 kids."

Rev. Freese said, "One only needs to follow her on Facebook to see that she is walking hand-in-hand with the people in the community and her church."

"You ask that I describe the spirit of the man I have nominated. There is also a man in the Spirit. This is Sam Powers!" wrote Jim Swaim of Piedmont UMC.

"His was the first face I saw when the debris was cleared and our storm cellar door opened" after a tornado ravaged that city in May 2011.

Before his 2014 appointment as senior pastor for Edmond-First UMC, Rev. Powers had pastored at Piedmont since 2001. His community-wide service included the fire department’s chaplaincy.

Swaim also applauded Powers’ leadership in Piedmont’s partner ministries with Cashion UMC, a smaller congregation. "Through the combined efforts of Sam, the church committees, volunteers, and support of the Oklahoma Conference, a rural Methodist church will not die," he wrote.

"I found Sam there in his hiking clothes, with dirt and perspiration on him and a genuine smile on his face … Sam not only leads the church in good programming, but also leads by example and by active, relational presence in the lives of people," Rev. Johnson said.

"The consistently high numbers of professions of faith at the Piedmont church, with 44 in 2013, is a telling witness to the priority of evangelism in Sam’s ministry and leadership." 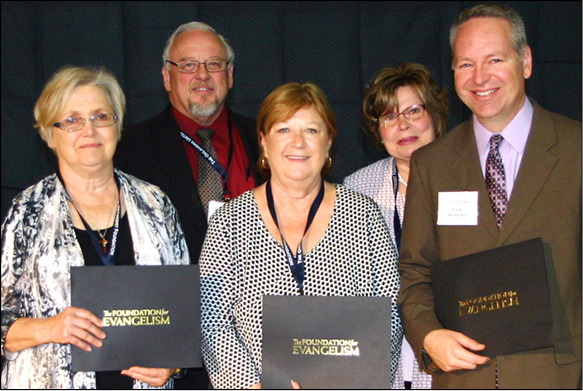 From left, the 2015 Denman Award recipients are Shirley Adams of Shawnee, Rev. Marcia Martin of Vian, and Rev. Sam Powers of Edmond. At back are Revs. Stephen Hale and Janelle Brammer, of the Discipleship Ministry Team’s evangelism committee.