DUBLIN (Ireland) — Still slightly groggy from jet lag, 11 of us gathered around a glass case in the Royal Irish Academy.

Ten from Oklahoma City University and our Irish guide gazed in wonder at a Psalter from the late Sixth Century, every letter as clear as if written yesterday. History came alive as Deputy Librarian Bernadette Cunningham pointed out details and told us about the Psalter’s significance.

This experience set the tone for our trip June 1-14 to Ireland to study about Celtic Christianity, one of the educational tours sponsored by OCU’s Study Abroad program.

We visited monastic ruins at Glendalough in the Wicklow Mountains and at Clonmacnoise, arriving by boat on the Shannon River from Athlone.

Each of us received a blessing from the Sisters of Brigid, Solas Bhride, at their retreat center in Kildare, and we marveled at biblical scenes carved in the stone of the high-standing crosses.

We learned about the people of the island before the arrival of Christianity, at the 5,000-year-old Newgrange Tomb and at the ancient royal site on the Hill of Tara. We enjoyed the natural beauty of rugged coastlines on the Antrim Coast Road, barren landscapes in the west, and the sweeping valleys of the Donegal peninsula.

Many students said the most moving part of the trip was learning about the recent Troubles between Protestants and Catholics, especially in Northern Ireland. We visited neighborhoods in Belfast separated by an imposing wall and viewed murals, some honoring perpetrators of violence, others calling for peace.

Members of the Corrymeela Community, an ecumenical ministry in Ballycastle, shared how their patient work of reconciliation continues today.

The Study Abroad program at OCU offers options for international study. One is faculty-led, short-term trips such as the one to Ireland. Some students choose to spend entire semesters at universities in other parts of the world. Religion majors Jordan Pittillo and Morgan Mitchell recently returned to the United States after the spring semester at Nazarene Theological College in Manchester, England.

As is common for many students abroad, Andrew pursued learning outside the classroom, taking short trips to the British Museum in London, the Coliseum in Rome, and the concentration camp at Dachau. To help exchange students adjust, his host university teams each U.S. student with a local student "buddy," a resource Andrew found extremely helpful to his "nervous American self."

She believes such experiences "will challenge you, change you, and motivate you. The benefits of studying abroad exceed the time, money, and effort students put into it."

Taylor Barnett, one of those who traveled to Ireland, agreed. "The trip was more than I could’ve asked for. It was worth every bit of money as I learned about an ancient culture and about myself. The world around us has so much beauty and wisdom to share, and I’d go back to Ireland in a heartbeat!" 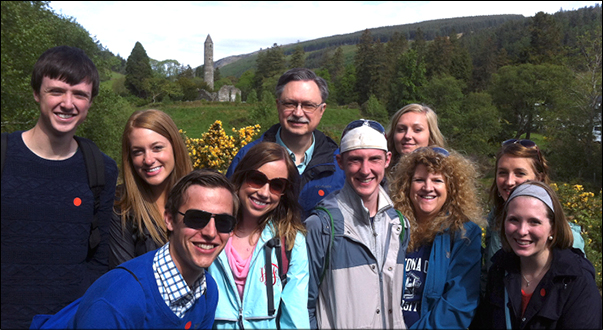 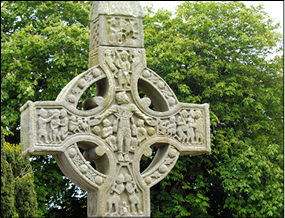 Muiredach’s High Cross at Monasterboice, north of Dublin, Ireland, is among the finest examples of Celtic crosses in the Irish and Scottish landscape. The cross stands almost 19 feet tall.