$10,000 in grant money went to Hugo’s Heritage Church, led by Francis Bartley, to promote its "Toy Makers of Hugo" project.

The church had 25 single men, so it was a "no-brainer" to form a woodworking project, he said.

The group creates wooden cars, tractors, and push-toys, as well as wooden "Runner Girl" shoes that are given as awards in Wright City UMC’s running program.

Members of Heritage as well as people in the community have lent their hands to the work, performed mostly with donated materials and equipment supplied by church members. Children join in, too, by helping to paint the new toys.

Pastor Francis called the program an example of "intentional ministry. Anything that we enjoy doing together as a Christian community can be used as mission if we do it intentionally."

Since September, the church has made "close to" 700 toys. Some are given to children who have been displaced by fire or crime. Others go to children in the foster care system, Francis said.

The grant money will be used to create a "safer environment" for the volunteers. Francis said the toymakers need better ventilation in their work area and woodworking equipment.

Twenty-five miles away in Wright City, Pastor Lois leads the Runner Girls. With a motto drawn from Hebrews 12:1, "Running the Good Race Together," girls are paired with mentors. The group’s goal is to run 300 miles together in a season.

For every milestone they reach, each girl receives a handmade mile-marker bracelet, which can also be worn as a headband, Lois said.

Purpose of the program is to encourage the girls to make friends and grow in discipleship, she said. A devotional time is part of the Runner Girls’ activities.

The program seeks to show the girls "how Christ relates to all areas of our lives," Lois said.

The grant money is to be used to grow the program. It will help pay for milestone celebrations, T-shirts, and running socks and shoes for girls who need them.

Francis said he and his wife are pleased at "how much the Conference really cares about the smaller outlying churches."

In the case of the Hugo church, "The energy for that merger came from doing mission together," he said, "and the energy for the mission was increased because of the New People New Places grant." The money gave the church "a shot of adrenaline."

The 2015 NPNP grants were awarded to 24 churches and ministries. In addition to helping promote discipleship, applicants are asked to explain how their programs will attract new, younger and/or more diverse people to church. 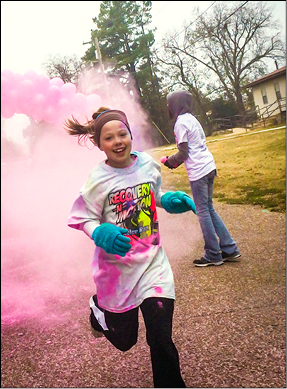 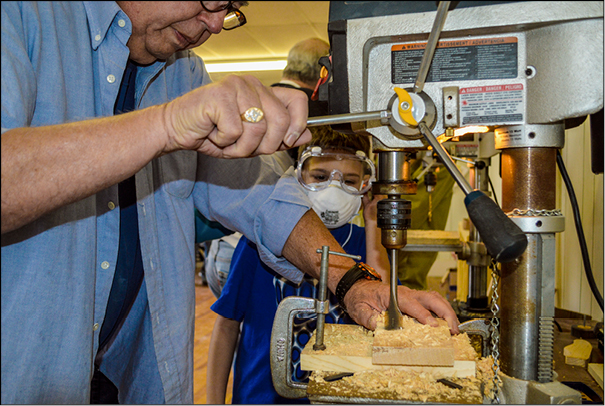 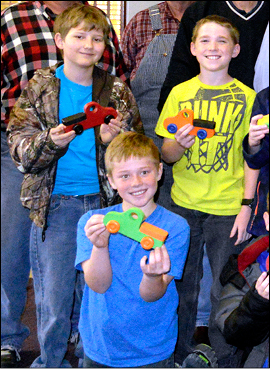 At a birthday event for Alex Roath, who is shown at front, the Toy Makers of Hugo and children from Wright City crafted and painted wooden gifts for other kids. Photos by Francis Bartley