Light streaming through the stained-glass windows of the Smith Chapel on May 29 illuminated the fifth commencement for Saint Paul School of Theology at Oklahoma City University.

Speaker David Wiggs advised the nine members of the Class of 2015 to keep their minds open to the opportunities that will arise for them.

"A key to effectiveness is to love those people to whom we are sent," said Rev. Wiggs, senior pastor of Tulsa-Boston Avenue UMC and a former district superintendent.

His first two appointments were to youth ministry.

Some seminary graduates may think "youth ministry is ‘a little bit beneath me,’" Wiggs said. He even was advised that taking those assignments would be a "big mistake."

However, in his view, "we are serving God wherever we find ourselves."

The new graduates are part of "Christ’s body of chosen people," Wiggs said. That body is made up of "marvelously functioning parts."

He complimented the graduates. "You have endeavored where others have given up."

Bishop Robert Hayes Jr. said the Class is a part of the "unique partnership" with Saint Paul’s other campus in greater Kansas City. He urged church members to keep the seminary in their prayers.

Rogers said he is affiliated with OKC-Penn Avenue Redemption Church’s prison ministry. He hopes to "grow there in that ministry (and) serve as best I can."

He felt a calling to prison ministry after hearing the testimonies of former inmates during a report by Criminal Justice & Mercy Ministries (CJAMM) at a previous Annual Conference. He said he feels "very at home. I do feel called."

Classmate Trommater was greeted by his sons, Weston, 2, and Jacob, 5, at the reception following the ceremony. The family was preparing to move to Jackson, Mich., where Trommater is to be an associate pastor at First UMC. 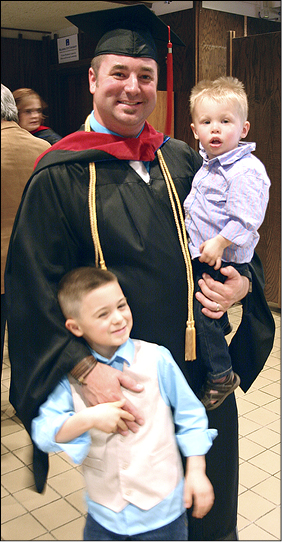 Graduate Timothy Trommater of Liberal, Kan., celebrates with his sons after the ceremony May 29. Photo by Chris Schutz 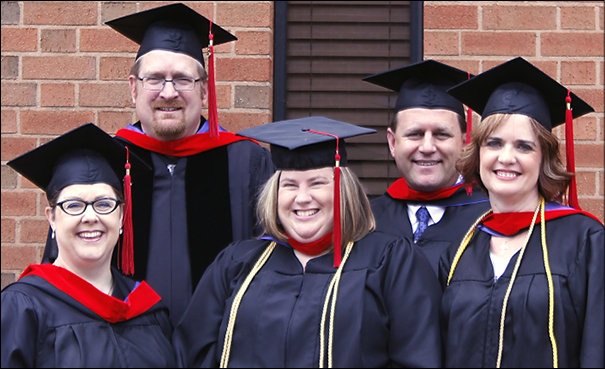